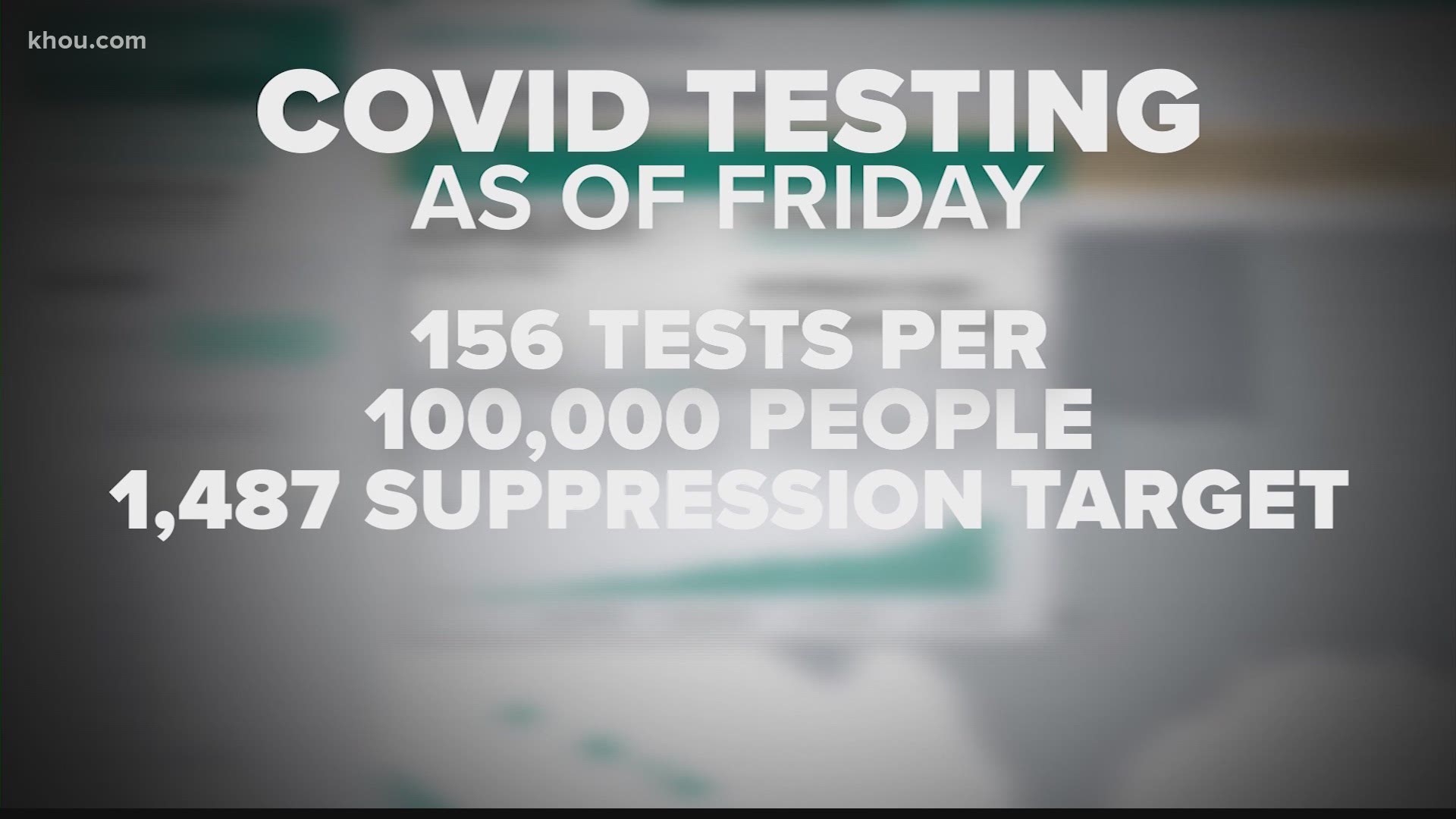 HOUSTON — Texas is doing considerably fewer COVID-19 tests than it should to make a dent in the pandemic, according to the math done by scientists at Harvard.

“We believe it's important to communicate to not just the policymakers and the researchers the current risk level for COVID-19 transmission in the community, but more importantly, is to communicate that to the public,” said Houston-area native Dr. Thomas Tsai, assistant professor in the Department of Health Policy and Management at Harvard T.H. Chan School of Public Health and a surgeon at Brigham and Women’s Hospital.

The goal is to control the pandemic Dr. Tsai said, and robust testing is one of several necessary steps in getting there.

Tsai is part of a team at the Harvard Global Health Institute that used publicly available data to create maps illustrating how much testing per 100,000 people needs to be done to mitigate, or slow the spread of COVID-19, and suppress the pandemic.

“A suppression level of testing really lets you get a comprehensive understanding of the true prevalence of COVID-19 in the community, more importantly, it's enough capacity to allow for a strategy to fight the pandemic,” he said.

As of Friday, July 10, according to Harvard’s math, Texas is performing about 156 tests per 100,000 people. This is a living map and the numbers are constantly changing.

“In order to truly suppress the current COVID-19 pandemic in Texas, it may need to test 10 times that number because of the escalating number of cases that we're seeing,” Dr. Tsai said.

According to Harvard’s analysis, 1,497 tests per 100,000 people would be the suppression target number of tests in Texas.

“Part of the challenge in testing the U.S. is a lack of capacity,” Dr. Tsai said. “You know, I feel like it's deja vu. We're repeating the conversations that we had in March. Now we're just seeing those bottlenecks play out on a local level, state by state and county by county. Part of the issue is that there's been a lack of a coordinated federal response in every state and county jurisdictions had to step up.”

“The way to rescue the economy is to beat the pandemic so we can ultimately return to life as normal pre-COVID-19,” Dr. Tsai said. “And that means developing the testing capacity, supporting contact tracing, but also ensure that there is a consistent public health messaging from the state level on wearing masks and following the guidelines that we know that work.”

We asked for comment on Harvard’s assessment of testing in Texas and if the state has its own targets it’s trying to achieve to beat COVID-19. KHOU 11 News asked to share those targets, if they existed.

We also asked the state about the number of contact tracers it has at the moment and for methodology behind those numbers. We recently did a story with TDEM about testing. At the time, the agency said the state was performing as many tests as possible given the lab capacity to process those.

KHOU 11 News followed up Thursday and Friday, asking if the state had secured any additional testing facilities that could process COVID-19 samples in order to increase the overall testing capacity.

The story will be updated when we hear back from TDEM and DSHS.