Some Texas bars still open despite state orders to close

Texas Gov. Greg Abbott issued an order Friday for bars to close. Not all of them did. 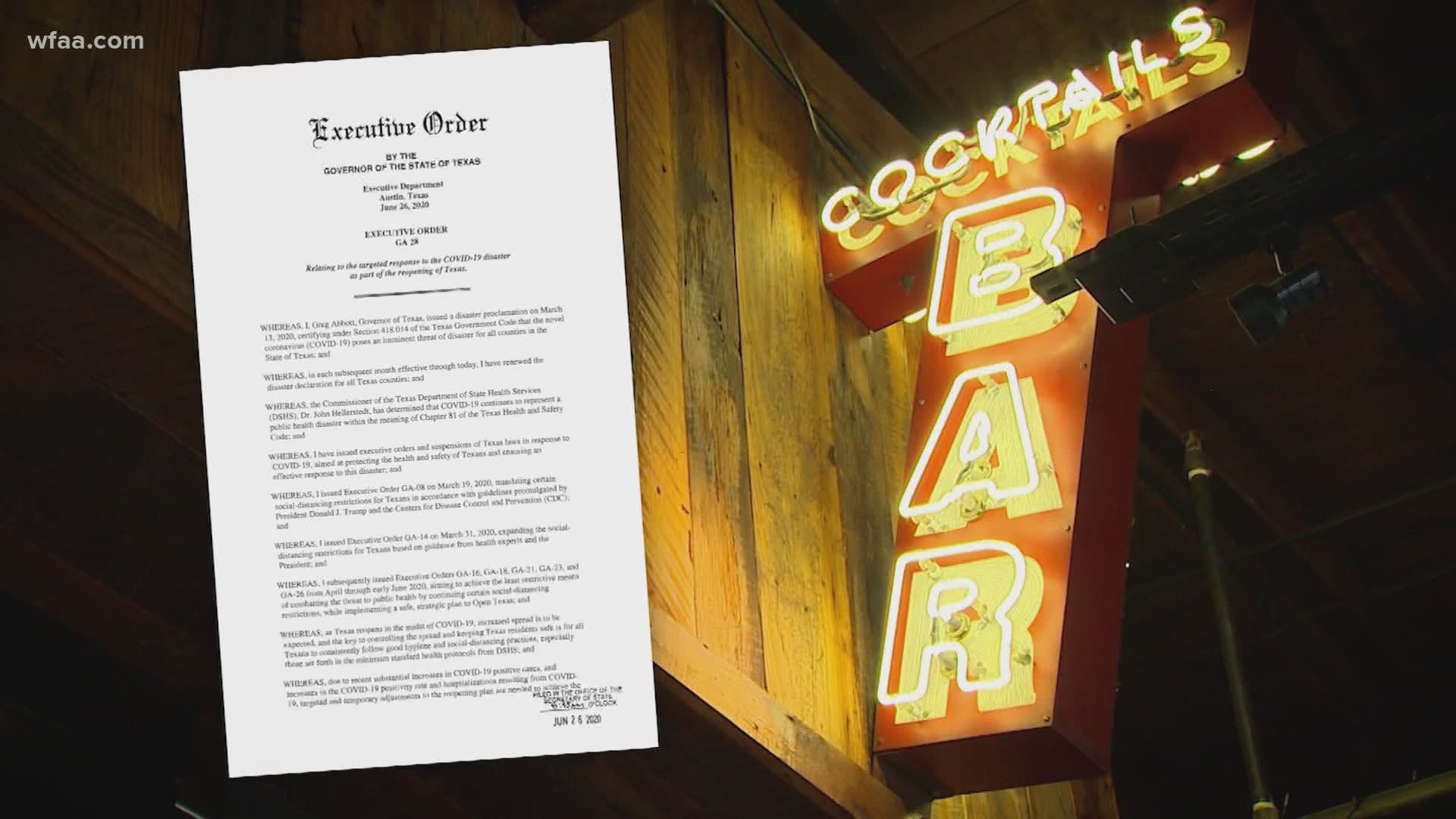 Some bars in the Lone Star State remained open Friday and Saturday, despite new state orders requiring them to close.

Gov. Greg Abbott signed an executive order Friday that required bars and similar businesses that bring in 51 percent or more of their total sales from alcohol to close.

“It’s another burden I think our restaurants and our bars have to carry,” said Dr. Emily Williams Knight, CEO of the Texas Restaurant Association.

COVID-19 has led to a loss of 8 million industry jobs nationwide, with 700,000 in Texas, according to the TRA.

”This is the worst hit sector by far,” Knight said.

With livelihoods on the line, some businesses are defying the order.

The Texas Alcoholic Beverage Commission said on Friday agents visited 628 bars across the state and found 30 that were serving in violation of the new stare requirements.

According to the TABC, 28 agreed to close and 2 chose to stay open.

As a result, the Whiskey Girl in Abilene and Outlaws Longview in Longview will have their licenses suspended for 30 days, TABC officials said.

RELATED: 'In hindsight': Gov. Abbott says he should've delayed the opening of bars

In the Bishop Arts District, customers enjoyed afternoon drinks at Revelers Hall and Whitehall Exchange on Saturday. Managers at both locations told WFAA they are restaurants, not bars.

While there are some food options on the menu, there wasn’t much food to be seen on tables Saturday afternoon, when it appeared most customers were there for the drinks and the music.

A half mile to the west, Tiny Victories was closed. A Facebook post told customers it would remain closed until further notice.

There is help on the way for some struggling businesses after the TABC announced a temporary waiver to allow restaurants and bars to sell mixed drinks to-go and for delivery.

Under the waiver, businesses must hold a mixed beverage permit and have permanent food service capabilities on the premises. The drinks must be mixed on-site, and they must be sold with food.

To abide by open container laws, the drinks also must be clearly labeled as an alcoholic beverage in a closed or sealed container that’s then placed in a sealed bag.

The TRA applauds the decision as a way to provide immediate help for struggling businesses and help them stay in business.

“Today’s announcement is an important step forward, giving many hope,” Knight said. “We’re very grateful to Gov. Abbott and our partners in the distilled spirits business for working with us to get restaurants some of the critical relief they need."