Most customers are compliant but the mask order leaves businesses bearing the brunt of enforcement. 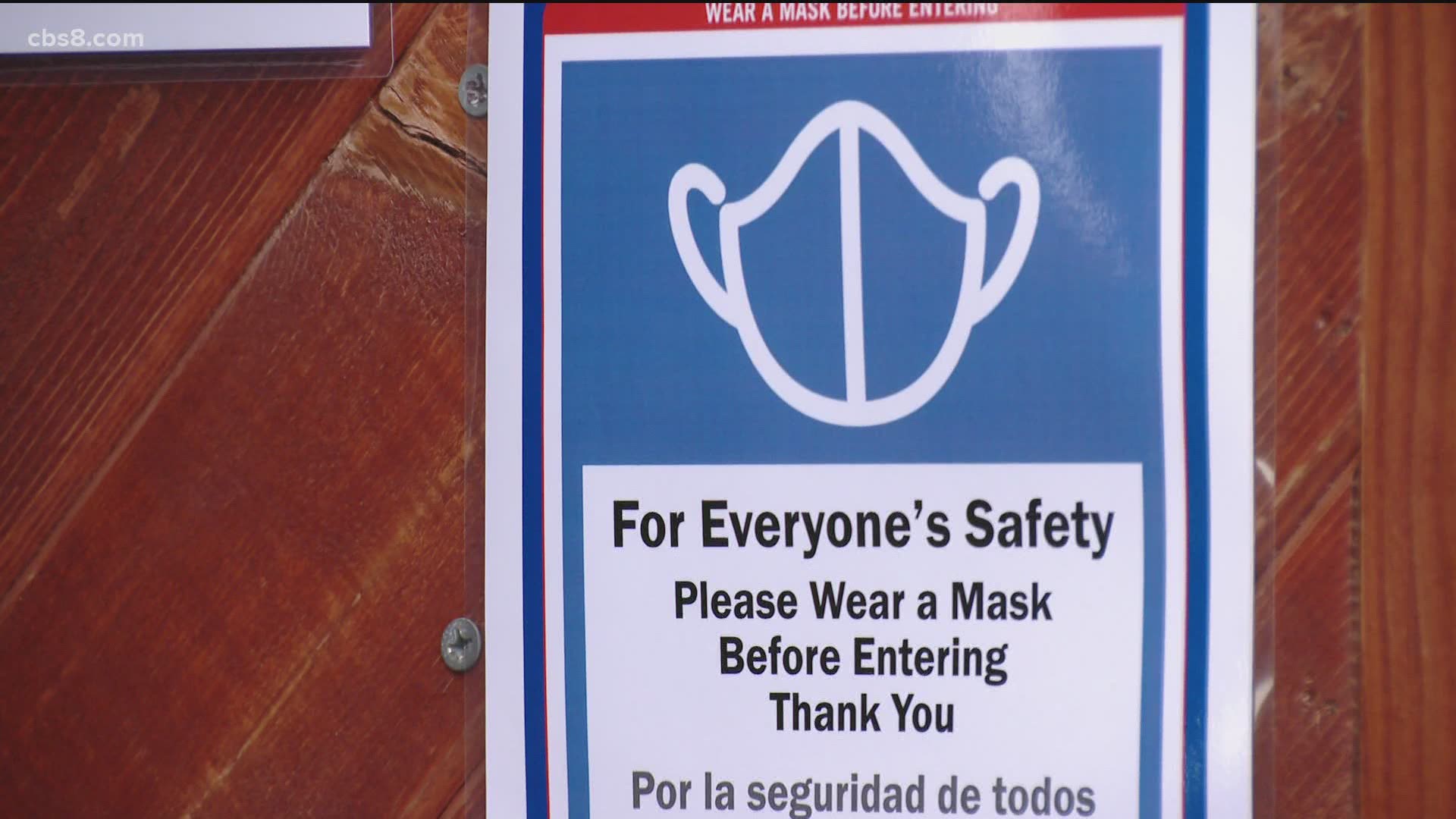 SAN DIEGO — The debate over face-covering requirements rages on and some businesses aren't messing around when it comes to enforcing the rules.

San Diego businesses say they bear the brunt of enforcement.

“Because we are the bad guys, we are the kill joys we are the party poopers. No, we want people to have a good time which is why we want everyone to wear a mask,” said Amber Hill, manager at Duck Dive Pacific Beach.

She says she was relieved when the governor mandated facial coverings indoors on Thursday, but that doesn't make her job any easier. For those who refuse they are asked to leave or not allowed inside.

“Of course, we get pushback people not wanting to do that, overall the community has been really nice and understanding,” said Hill.

Those who don't want to wear a mask to their table or while moving around the restaurant have been turned away at some restaurants.

“It’s not fair to make the restaurants enforce it they are trying to keep their business open and bring in customers we need other people with authority enforcing,” said Tim Fraser, Gaslamp customer.

Abbie Alford
A National City police Officer under fire for allegedly using racial... slurs about Black people with a former relative. His stepdaughter's Black boyfriend is also the father of their 14-month-old biracial son. She says she felt wrong for staying quiet but not anymore.

A spokesperson for San Diego Police says they have Vice detectives following up with complaints made to 211 about compliance.

Viral video of a Costco worker taking a man's cart away for not wearing a mask, activist Brandon Straka was kicked off and banned from American Airlines for refusing to wear a mask while seated. United Airlines says it will strip travel privileges for a period if a passenger refuses to wear a mask.

“You don't think you are sick. I don't care but protect the rest of us and put your mask on, c'mon,” said Blaine Wiegel, Pacific Beach customer.

On Thursday, California became one of at least 16 states to require face coverings in public, The CBS8 Facebook page lit up with comments.

Jack says it should be up to individual business owners, “I think it should come down to no shirt no service type of deal.”

A recent study by the journal of Health Affairs hypothesized that 200,000 cases of COVID-19 possibly could have been prevented because of ordinances mandating face coverings.

RELATED: These states require face masks be worn in public

RELATED: What some celebrities are saying about California's mask rule