Businesses will now be required to enforce their customers and staff members to wear masks, with some exceptions. 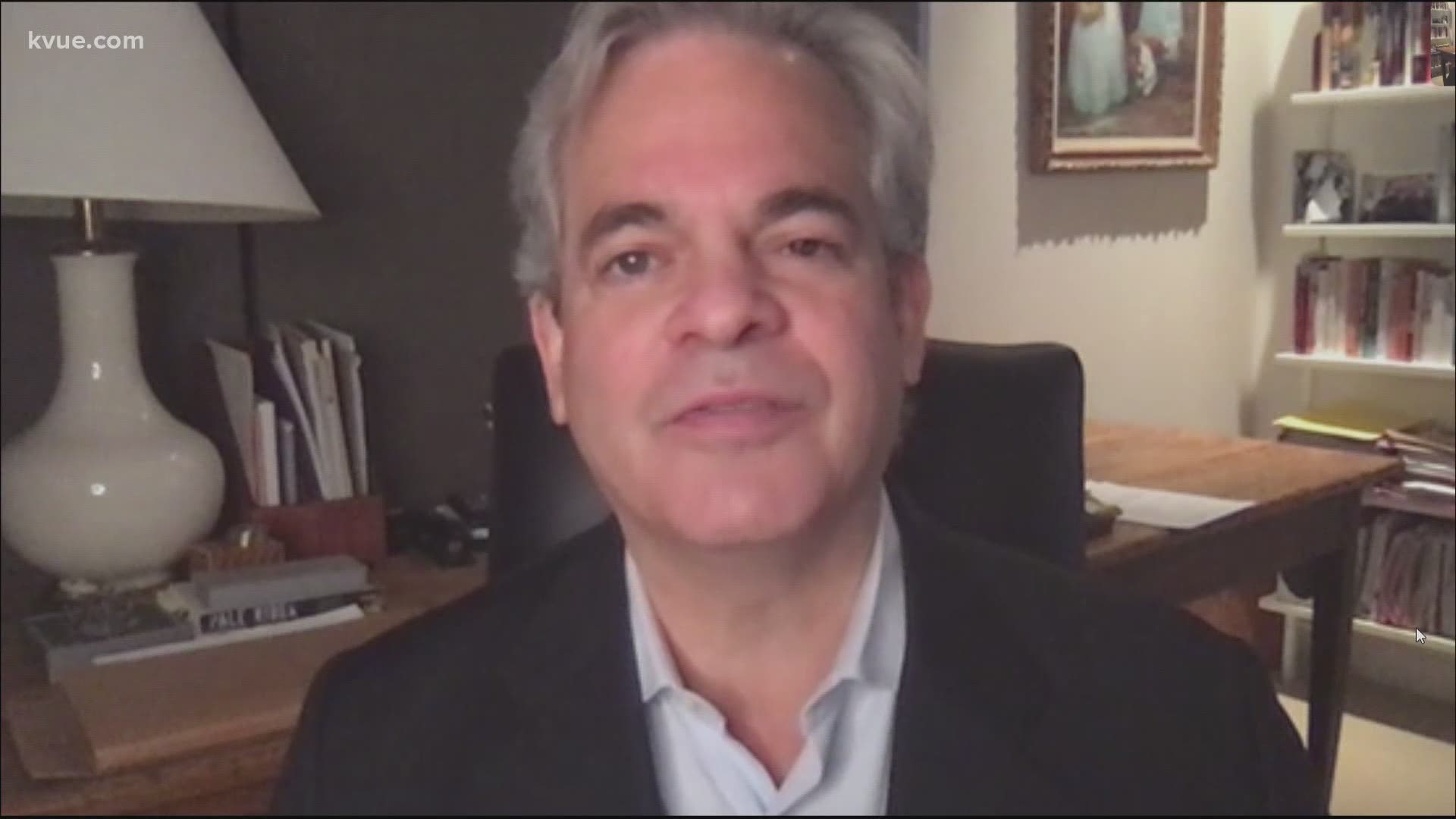 AUSTIN, Texas — Austin Mayor Steve Adler said the City has issued an order to direct businesses to create a safety plan for COVID-19, including a face mask mandate.

The order will require all businesses to ensure all workers and customers wear masks or coverings except in certain circumstances, such as if the person is alone in a single space, is only with members of their own household, or when doing so poses a physical health risk to the individual.

Further health and safety measures required by the order shall be developed and implemented on or before June 23.

As far as making sure businesses are enforcing the rule, the mayor said fines could be an option but he hopes it doesn't come to that.

"But ultimately, you know, we had mandatory masking before more and more people started doing it," he said. "We didn't end up having to fine anybody. And I hope that doesn't happen again."

Ultimately, he said wearing a mask is a small price to pay to ensure safety.

"I know that it's uncomfortable and I know that it's awkward and it's a nuisance and it's hot," Adler said. "No one wants to wear face coverings I understand that, but no one wants to close the economy either. So, we don't have to choose. As the governor said, we don't have to choose between opening up the economy and keeping people safe. Wearing a mask as much as a nuisance as it is, is a small price to pay in order to help keep our economy open."

The move comes after Gov. Greg Abbott maintained his position on Tuesday that cities cannot impose penalties for not wearing a mask.

Austin Public Health's Dr. Mark Escott said if a business decides to enforce customers to wear a mask, they can turn away people who choose not to wear one.

"I think it is an absolutely responsible thing to do for businesses to take a stand not only to protect other customers in that business, but to protect their employees," said Dr. Escott.

Blue Elephant Manager and Buyer Irene Carter said they haven't run into any issues with customers refusing to wear a mask and they're just grateful to have their doors open for the people who care about Austin's small businesses.

"Thankfully, I think we've seen a lot of really supportive people lately. We've got loyal customers. If [closures are] going to happen again, Austin is the place to be a small business because you know the community has really come out and supported us," said Carter.

The announcement comes after Adler and the mayors of Houston, Dallas, San Antonio, Fort Worth, Arlington, El Paso, Plano and Grand Prairie sent a joint letter to Abbott on Tuesday. In it, they asked for the authority to govern the use of face coverings in their cities, saying that local officials should be trusted to make informed choices about health policy.

"If you do not have plans to mandate face coverings statewide, we ask that you restore the ability for local authorities to enforce the wearing of face coverings in public venues where physical distancing cannot be practiced," the letter said.

The governor's office responded to the letter in a statement that read: "None of these local officials have lifted a finger to impose penalties and enforcement mechanisms currently available to them. The one time a county judge did, a business owner wound up in jail.”

But later in the day, the governor's office gave a symbolic nod of approval, saying the order "is not inconsistent" with state mandates.

Adler said he was working to stay within the guidelines of the state.

“The governor has now given us a path and we will act consistent with his statement,” Adler said on Wednesday. “Wearing masks is important – to our health and to opening up the economy. We will be entering an order directing businesses to come up with a simple safety plan over the next several days. Austin businesses are great and many of them, if not most, have already done this. During this time, we will transition to a more direct order on masks, working with our business community so our whole city moves forward together and so that everyone can get prepared."

In an interview with KWTX, Gov. Abbott said there was a plan in place all along.

"All that was needed for local officials to actually read the plan that was issued by the State of Texas," he said. "It turned out earlier today that the county judge in Bexar County finally figured that out. They finally read what we had written and what they now realize they are capable of doing is that we want to make sure individual liberty is not infringed upon by government, and hence government cannot require individuals to wear masks."

He said that much like businesses can require a patron to wear shoes and a shirt, they can require them to wear masks.

"So here's the bottom line," the governor said. "I had two standards: One, no Texan can be put in jail for failing to follow these standards. Two, no government can mandate individuals to wear face masks. That said, when people go out and about, as they're walking around town, they don't need to wear a face mask, but when they go into a store or other business, those businesses can require, and that's exactly what it looks like local governments will begin to do."

In the early weeks of the COVID-19 pandemic, many Texas cities – including Austin – issued local orders requiring residents to wear face coverings in public. However, in early May, Abbott issued an executive order that stated doing so is not required by state law.

Since then, local leaders and Abbott himself have continued to encourage wearing face coverings to slow the spread of the virus.

If a business has a patron who is unwilling to abide by the order, it can ask the individual to leave. If they refuse, the business can call 3-1-1. Austin police will then respond and, if the individual still refuses to leave, the person will be arrested and charged with criminal trespassing.