On Saturday, the City of Austin banned gatherings of 250 people or more until at least May 1, to help tackle the spread of COVID-19. 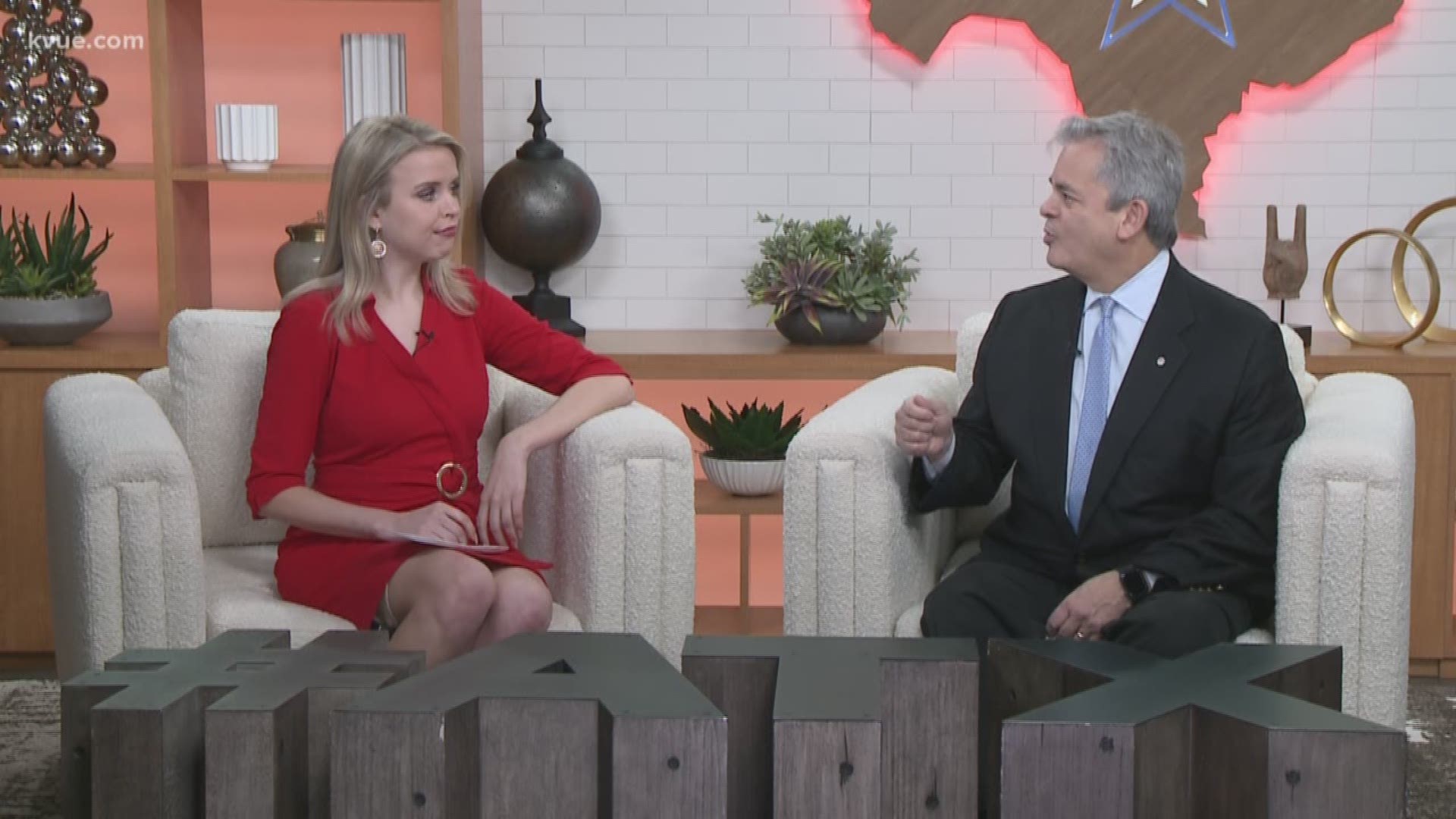 AUSTIN, Texas — As coronavirus continues to spread across the country, government leaders have encouraged people to practice "social distancing," which means staying away from situations where a lot of people are present and trying to stay at least six feet away from others whenever possible.

To encourage social distancing and tackle the spread of coronavirus in Austin, the City has banned gatherings of 250 people or more until at least May 1.

Sunday morning, Austin Mayor Steve Adler stopped by the KVUE studios to talk with Hannah Rucker about the importance of practicing social distancing as more coronavirus cases pop up around Central Texas.

Hannah Rucker: What message do you have for our viewing area about social distancing?

Steve Adler: You know, the virus has come to Austin, as we knew that it would. We know it's going to spread just like the flu spreads. So, at this point, what is in our control is how quickly it spreads. The cities that have run into problems are the cities where their health care delivery systems have just been overwhelmed. But if it's a virus that comes into our city kind of gradually and kind of moves through our city and then goes away, then we'll be in the best possible place. But in order to make that happen, we have to practice social distancing. It's real important that people not go out into large groups. That's why we basically banned all large groups over 250. But I've urged people not to go into any large groups of 125. You know, we're not saying you have to stay at home and you can't leave your house, but to the degree that you can stay at home, always a better thing to do. When you do venture out, it's really important to stay six feet away from other people to the degree that you can. It's important that we wash our hands. It's important, most important, that if you're not feeling well, you don't head out at all. You know, a week ago – and times are changing quickly as we move through this – I did a video with the county judge and with the senator urging people to go out and patronize our restaurants and our bars. That is not my message any longer. You know, at this point, it's better for people to stay in small groups, especially if you're older. If you're over 60, 65, 70, you shouldn't be in any groups, really, if you can avoid it. No, it's certainly not, no, no group greater than 10 people.

Rucker: Absolutely. And I know your message is really catering to the economic impact of this – [canceling] South By, I know that was a huge decision and it's crazy to think even a week has passed by since then. And so, now it is a different message. It is a different you're encouraging – I mean, we have spring break. I feel like people are inevitably going to be traveling here this week regardless.

Adler: And there are people who are going to be traveling, and we have not cut off our city and there are no travel prohibitions, you know, from American cities. But at the same time, we have to do the things that we can control and social distancing to make sure that the virus, since it's already here, spreads as slowly as we can make it spread. That's what we're aiming for.

Rucker: One thing I want to ask you: we've been getting a lot of calls to our newsroom about testing. I think, you know, there's a lot of anxiety with that right now, what resources we have. What about drive-by testing? You know, we just saw here that other cities across the country are trying to implement more of that. What are your thoughts on drive-by testing for here in Austin?

Adler: Well, certainly testing is really important because it gives us actual knowledge about how widespread the virus is. And so, we know how to target our efforts. Unfortunately, the federal government was not getting the testing out as I think that it should have. We're not getting a lot of tests from the State. So, I'll tell you that here, locally, while we're real appreciative of everything we're getting from them, we're doing a lot of sourcing ourselves or our hospital groups or our health care providers are coming up with tests independent of the government and the State and we're beginning to set those out. I think there may be one drive-up location in Austin right now in North Austin – but by drive-up, it doesn't mean that anybody can get in line and go because we have we don't have enough tests for everybody to be tested. So, we really are focusing now on people that have temperatures, people that have come into contact with people that we know have the virus. So, we're getting more testing deployed because it's important. But the way to get the testing is really to go through your doctor so that we make sure that the people that are most in need of the test are the ones that are getting it first.

Rucker: It's also my understanding that when it comes to evictions and electricity, that right now there's kind of a pass with that – that Austin Energy is working with people on utilities and things like that. Is that right?

Adler: That's right. Austin Energy and [the Austin] Water Department are not cutting anyone off. The magistrates have indicated that they're not moving forward on eviction hearings in cases. We're doing everything we can to help people that are most in need. I urge people to go to Stand With Austin, which is the Austin Community Foundation effort to raise money to help the people that are most hurt and least able to sustain it. That would be AustinCF.org. That's the Community Foundation website. I urge people to support that.