According to Paxton, those requirements include “strict and unconstitutional demands” on houses of worship. 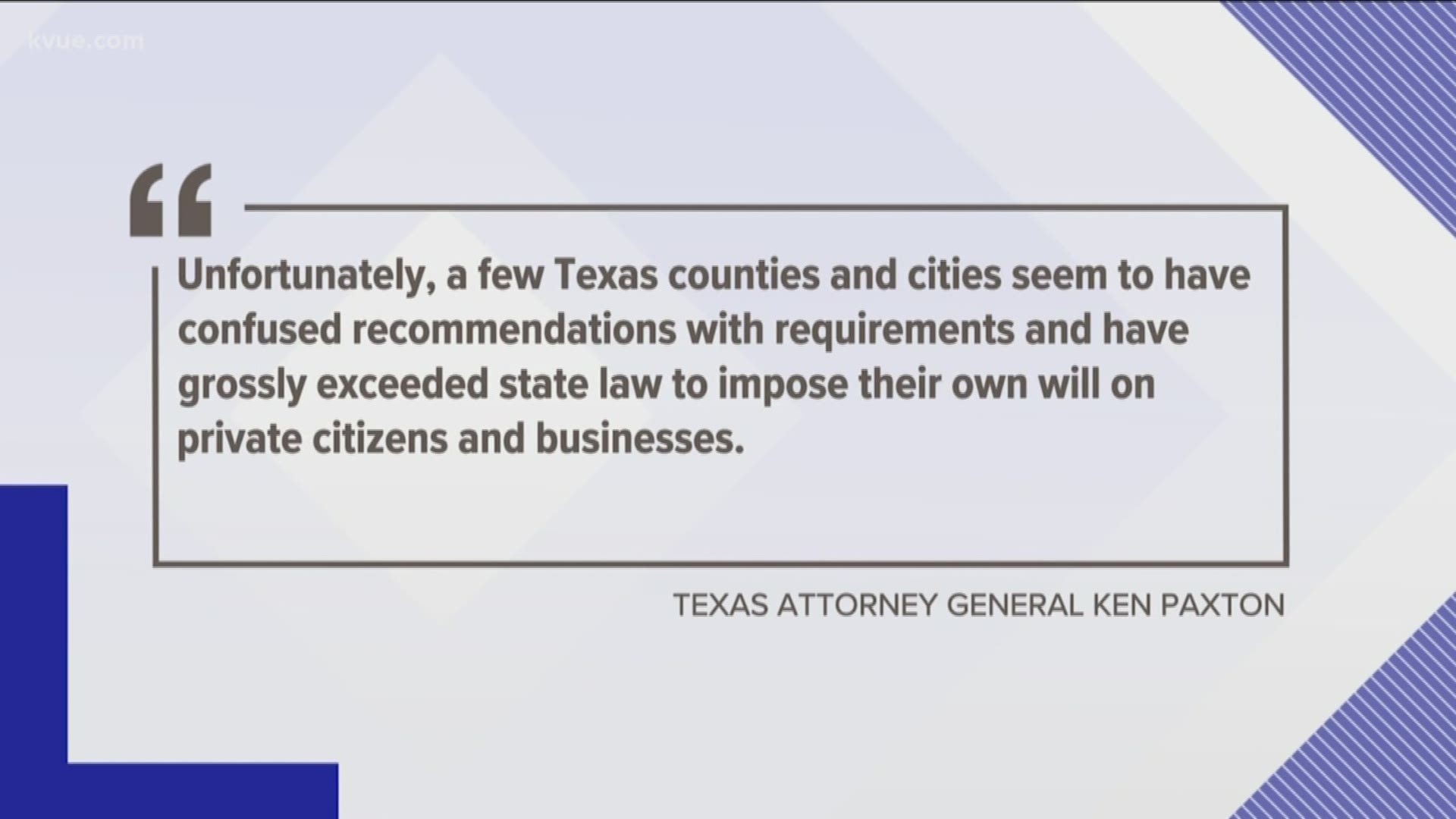 AUSTIN, Texas — Editor's note: The attached video was published on May 12.

"We do not believe the County Order conflicts with Governor's Order, and does not exceed the County Judge's authority under the Disaster Declaration," Judge Biscoe wrote.

On May 12, Paxton issued a letter to Travis County and the city of Austin, warning some requirements in the city and county’s stay-at-home orders are unlawful and must change to meet the state’s most recent order.

According to Paxton, those requirements include “strict and unconstitutional demands” on houses of worship, restrictions on what the state considers essential services – such as contract tracing measures at restaurants – penalties for not wearing masks and shelter-in-place demands. Paxton said the city and county orders failed to differentiate between recommendations and mandates.

“Unfortunately, a few Texas counties and cities seem to have confused recommendations with requirements and have grossly exceeded state law to impose their own will on private citizens and businesses. These letters seek to avoid any public confusion as we reopen the state,” said Paxton. “I trust that local officials will act quickly to correct any orders that unlawfully conflict with Texas law and Gov. Abbott’s executive orders.”

Judge Biscoe responded to this, saying that this language is not actually in the County Order.

"Instead, the County Order incorporates the Governor’s Order and exceptions for obtaining essential services, including religious services," said Judge Biscoe.

In a statement, Travis County Public Information Officer Hector Nieto said the county has received the letter and county attorneys are reviewing it.

"Our initial thought is we disagree with the attorney general," Nieto said.

"Up to this point, we have avoided the naked politicization of the virus crisis," said Austin Mayor Steve Adler on Tuesday. "I will not follow the AG down that road. The City’s order complements, incorporates and does not conflict with the governor’s order. We will continue working to keep our community safe to the fullest extent allowed by law."

Former Travis County Judge Sarah Eckhardt, who received the letter on her last day in office, told KVUE it was divisive.

"That's a divide-and-conquer letter. It really has nothing to do with progressing us and advising our constituency on what's in their best interest from a public safety standpoint, so I really don't want to give any fuel to the fire of division," Eckhardt said.

On May 8, Austin and Travis County announced an extension of their stay-at-home orders, which followed the state allowing its order to expire on May 1. In Austin the order is extended until the end of May and June 15 for Travis County.

The order "gives us the best chance" to avoid a second surge of COVID-19 cases, Adler said.

“This virus is as infectious today as it was a month ago – it spreads quickly,” Adler said. “Everybody should be minimizing physical interactions absolutely as much as they possibly can as we dip our toe to increase commercial and social interactions. That’s what this order does.”

“We have to stay the course,” Eckhardt said. “Even as we venture out, we must keep limiting our person-to-person contact. Our lives or someone else’s life depends on it. We've seen hospitalizations begin to rise again. Every day ask yourself what’s essential for me today? Who am I coming in contact with? How can I keep them safe?”

Paxton's full letter and be read below.

Here are a few things to know about the new orders:

To view the Austin order that expires on May 30, click here.

To view the Travis County order that expires on June 15, click here.

RELATED: Here's why Austin may extend its stay-home order even though Abbott let the State's expire

Mayor Adler and Judge Eckhardt said they can extend local stay home orders as long as they write orders that align with Gov. Abbott's orders to reopen businesses. They also can't create any penalties against individuals who disobey the stay-at-home order.

"The governor's order didn't say we couldn't make it mandatory. It said we couldn't have a criminal or civil penalty," Mayor Adler said on Monday, May 4.

Meanwhile the Texas Democrats pushed back against the letter from Paxton.

"Indicted Republican Attorney General Ken Paxton should focus on doing his job instead of trying to intimidate our county judges and mayors," said spokesperson Abhi Rahman. "Paxton and Abbott were perfectly fine with throwing everything off to local leaders while they didn't have a plan. Our local leaders stepped up and are the reason Texas has contained the coronavirus crisis."