How COVID-19 is impacting how long it takes for you to get new home appliances, repairs

Experts say after the pandemic made it's way to different factories for home appliances, it impacted the supply chain. 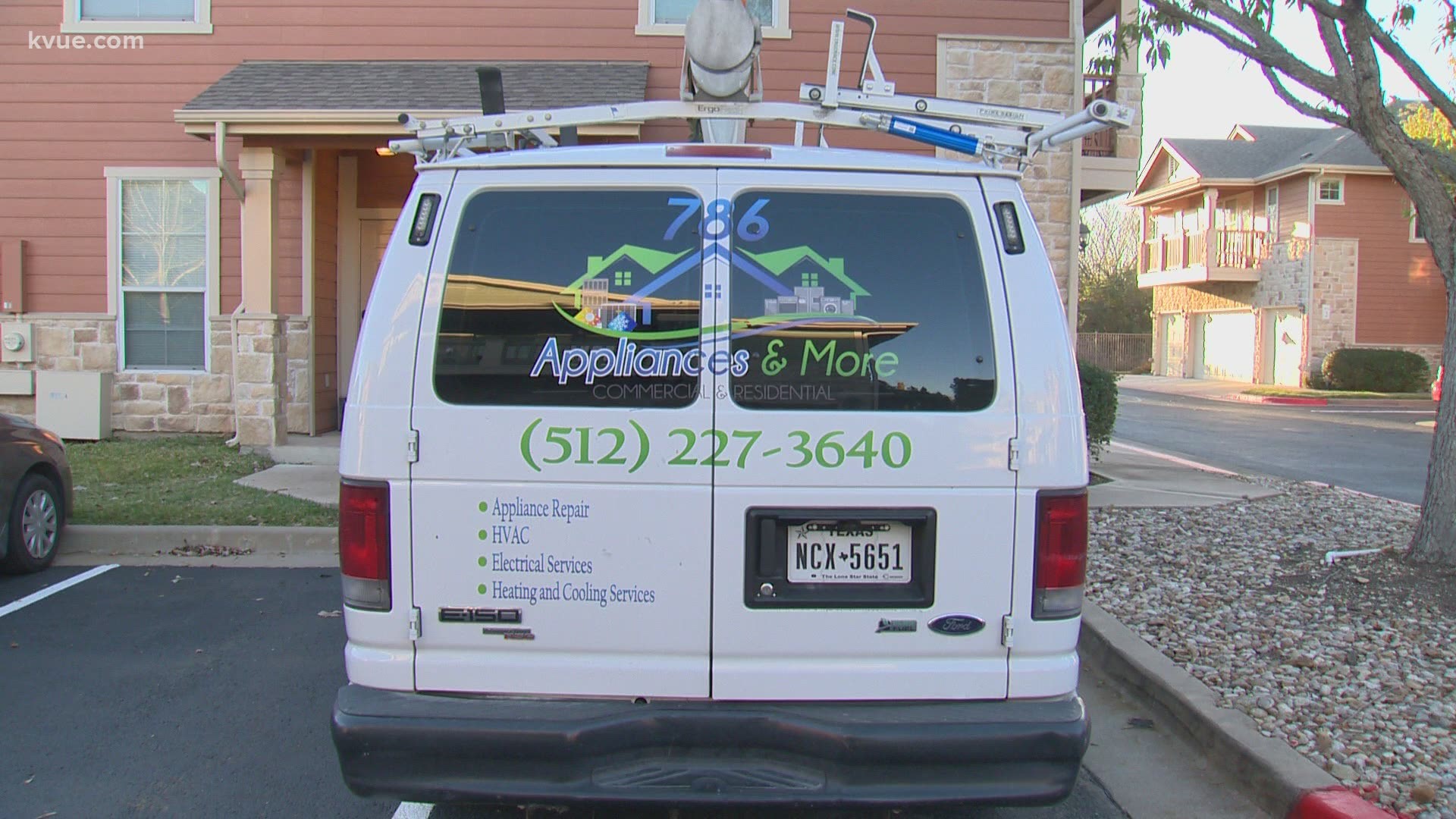 ROUND ROCK, Texas — Dylan Taylor, the owner of 786 Appliances and More, has been working in trade since he was a teenager, so he's used to the busy daily schedule of calls to respond to for fixing up appliances.

On Friday, Taylor strapped up his tool belt before entering Round Rock resident Katrina Symons' home, who said she had been waiting for almost a month for someone to come out and fix up different things.

This time, it was Symons' washing machine.

“I called him this morning, and he’s out already," she said, referring to Taylor. “I’ve been trying to get things fixed since the 7th of November."

Symons believes the pandemic has something to do with the long wait times for getting home appliances repaired, and she's not alone. Experts say the pandemic is also impacting the pace at which customers are able to get new appliances from stores.

Credit: Jackson Grimm
Dylan Taylor, the owner of 786 Appliances and More, works on a laundry machine inside of a Round Rock home.

After the coronavirus pandemic made its way into the U.S., it also made its way to different factories for home appliances.

"What happened first was that a lot of factories had to shut down both here and abroad. And, at the same time, they had to retool to make it safer for workers to come back in," said Tobie Stanger, a senior editor for Consumer Reports.

Stanger has done work on appliance retailers that Consumer Reports has covered, among other topics.

Stanger told KVUE that with everyone being home due to the pandemic, people are using their appliances like dishwashers and laundry machines more, creating a demand for new home appliances.

"So you have this perfect storm of not enough supply because manufacturing shut down for a while and increasing demand. And you really saw that building into the summer and all the way through to the past weekend," Stanger said. "... it is sort of a domino effect. You had plants shutting down, and then because they shut down for a while, there was nothing in the supply chain and people started demanding appliances."

Stanger added that big box stores were open during the crux of the shutdowns, so they sold a lot of products to the point of selling out.

"And there hasn't been that much coming back online," Stanger said. "It's slowly coming back, but the manufacturers have not completely ramped up. And as a result, there's not as much supply ... there's big demand. And so prices really haven't come down that much."

As a result, Stanger advises that if you're someone who needs a new appliance, be prepared to be flexible.

"If you're looking for a very specific machine, it could be a while before you get it. So if you need something right away, you're going to have to be a little bit flexible," Stanger said.

Credit: Luis de Leon
Dylan Taylor, the owner of 786 Appliances and More, works on a laundry machine inside of a Round Rock home.

On the side of repairs, Taylor told KVUE the supply chain issues possibly caused by the pandemic created a trickle-down effect for parts.

"If one person in a supply chain at the factory gets COVID, then the factory has shut down for at least 10 to 15 days and that's going to slow down the shipment of our parts," Taylor said. "The hardest part about meeting demand with the COVID is making sure that we have the supplies necessary for our consumers. Like we had some consumers doing Thanksgiving that we couldn't get their supplies to fix their ovens. And I kind of feel bad about that, but it was nothing we could do."

Taylor added that he believes the pandemic has impacted consumers financially enough – that they're not making purchases on new appliances as often this year. As a result, he had to shut down his storefront he once owned on Interstate 35 in North Austin.

"We couldn't generate enough revenue to sustain the storefront at that point," Taylor said.

But the future is looking up for Taylor's business. He told KVUE he's working on getting another storefront as soon as business picks back up.

Overall, Stanger advises that people should prepare alternatives if they're in need of a new appliance.

"I think the retailers are trying very hard to help people who are really in a bind with, say, refrigerators. But if it's your dishwasher, you know, maybe the wait may be a little longer because people can do with dishwashers," Stanger said.

She added that local stores may be a better option for now.

"Going to an independent retailer, a local mom-and-pop appliance store or a chain that's local to your area may actually be a better idea," Stanger said. "They have a different way of getting their inventory than the big-box stores. And sometimes they have stuff when the big-box stores don't have them. They also use their own trucks, their own delivery trucks, and they can be very responsive to specific issues related to delivery and installation and returns."

Taylor said he's been trying to help out customers with discounts for those impacted by COVID-19 and has a message for customers.

"Stay safe, make sure you wear your mask. And, you know, we hope everything works out," Taylor said.