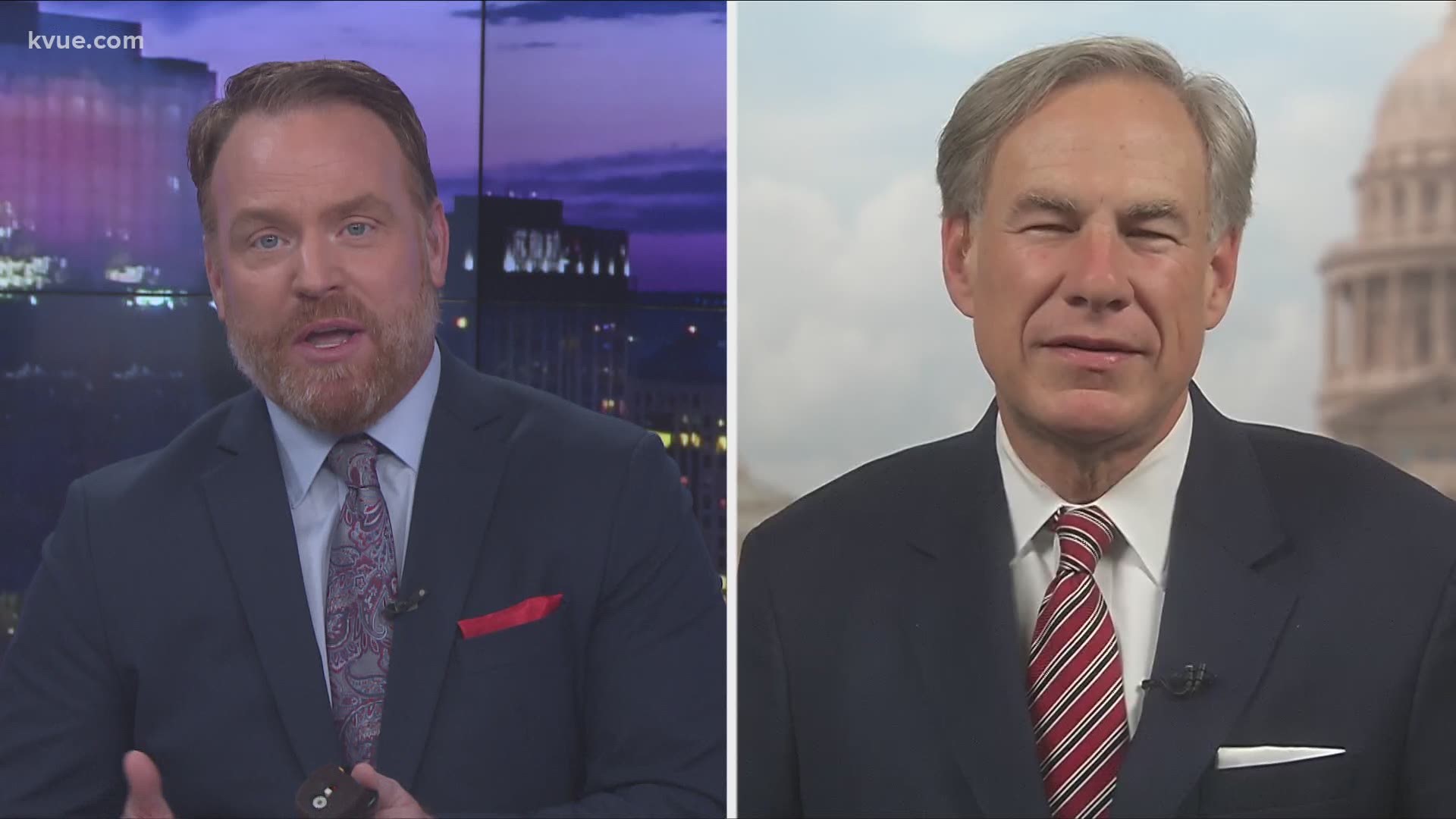 AUSTIN, Texas — In an interview with KVUE anchor Bryan Mays on Monday afternoon, Gov. Greg Abbott revealed when he expects a COVID-19 vaccine will be available in Texas and how he feels about college football returning this fall.

Mays: As students return to class in some school districts, will schools be required to report COVID-19 cases to Texas Education Agency, and is there a statewide plan to deal with any outbreaks?

With regard to response to any type of outbreak, the TEA has built-in flexibility into the school system so that schools can take several steps. One would be if anybody in a school, whether it be a student or a teacher or staff member, tests positive. The school has the option to shut down entirely or shut down a part of the school and, during that time, educate children remotely while the school goes about the process of sanitizing the school and stabilizing it for the return of the students. Separate from that, local public health authorities have the ability to temporarily close the school if needed. That was done this past school year for the purpose of closing schools because of flu outbreaks.

Mays: President Donald Trump, through executive order, is attempting to bring back the weekly unemployment bonus payments, about $400 a week. Individual states will be responsible for about a quarter of that payment for each person filing. Will Texas be paying that money? If so, where will that money come from?

Abbott: I had the opportunity to speak with the vice president as well as the secretary of treasury [Monday], as well as other members of the cabinet, to learn more about how this process can work, and I'll tell you two updates about it. One is, if the states do pay for it, they said states are able to use the CARES Act funding to pay for that component. However, I also know that the administration continues to negotiate with the Democrats in the U.S. Senate, as well as in the U.S. House, to try to find a strategy in which the federal government will be providing all of that unemployment just like they did in the first round of CARES Act funding.

Abbott: Let's go back in time to when Texas opened up. We were testing about 20,000-25,000 at that time, and I said the goal was 30,000. What caused us to get so high is we had several surge teams in place and different locations in the state of Texas that were doing rounds of 50,000 tests per week. And it's that massive surge testing that took us over the 50,000 mark. Right now, [it's] staying around the 40,000-45,000 level. I can tell you when schools fully open up, there are new testing strategies that will be employed that may mean that we will be testing far in excess of 50,000 people a day because of the increased testing that will be taking place at schools as well as at nursing homes.

Mays: You recently announced nursing homes that care for individuals that receive Medicare in Texas will receive $1.1 billion through the Quality Incentive Payment Program. That's a program that is performance-based. So how will the funds there be distributed?

Mays: We know there are several vaccine trials underway, many in the state. How confident are you that a vaccine will be made available to Texans when one or more are approved?

Abbott: Well, I'm proud that Texas universities as well as hospitals are involved with regard to the advancement of vaccines. I'm very confident that perhaps as early as later on this year, vaccines will become available. That said, I was just at UT Southwestern [Medical Center] in Dallas last week and learned about more therapeutic drugs that will be able to come to market really soon, maybe as soon as next month, to treat people who do test positive for COVID-19. So the first thing coming up will be treatments for people testing positive. That will be used for the next few months. And then after that, the vaccines should soon come available.

Abbott: You know, I'd defer to the position of the college football players. And what I see from the college football player is they really want to play. It's their careers. It's their health. And I think schools should work with them on protocols to make sure that their health can be maintained and secured and allow them to play. And then, once they are able to establish that, we can work out how many people can be allowed in the stands to watch them play.