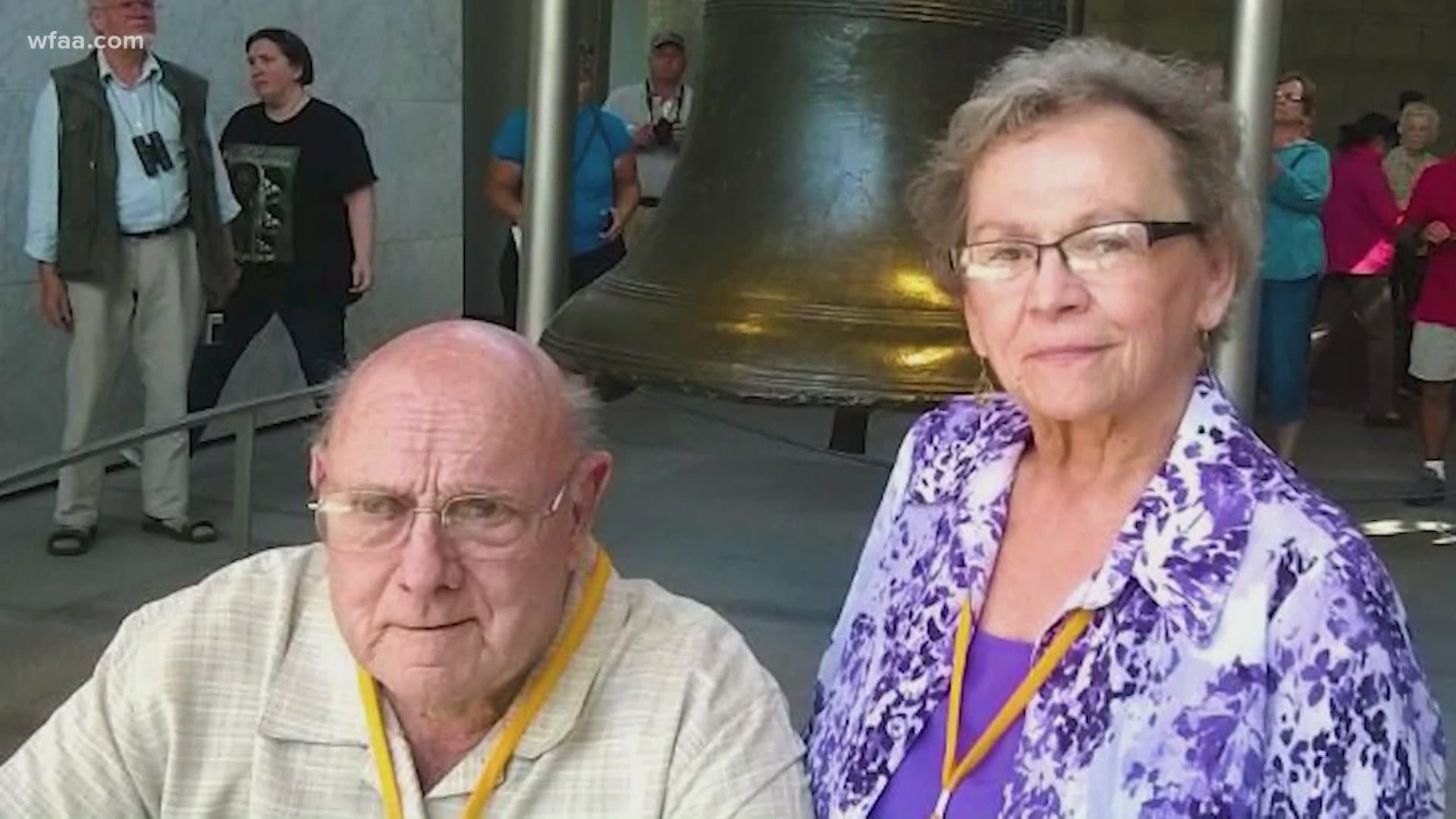 FORT WORTH, Texas — Tim Tarpley has one word to describe the nurses he saw in the halls of Texas Health Harris Methodist Hospital in Fort Worth.

“They’re just these little angels with eyes. You don’t even get to see their face,” he said – referring to the layers of personal protective equipment the staff is wrapped up in while caring for COVID-19 patients, like his parents, Betty and Curtis Tapley.

Tim says his mother felt like she had a sinus infection, but after about 10 days, it hadn’t improved.

She wondered if something was wrong with a tooth, so she made a dentist appointment.

“But she left for her dentist office two hours early, and that didn’t make any sense because it was only a mile and a half away,” Tim said. “But, on the way there she wrecked her car.”

He got emotional thinking back on going to help her – she had trouble telling him where she was and what had happened.

“She’d hit a curb and destroyed her wheel,” he said.  “But, she just wasn’t really making sense.”

The next day, the confusion was worse.

“She couldn’t even check her blood sugar,” he said. “That’s something she’d done for more than 20 years. She couldn’t figure out how to get the right strips and do the test.”

He wondered if she had a concussion or maybe was suffering a stroke. He took her to Harris Hospital and was shocked when she tested positive for COVID-19.

RELATED: MAP: These are the confirmed COVID-19 cases in the Dallas-Fort Worth area

“They both kind of knew if they got this - if it was brought into the house - that my dad would not be able to survive this,” he said.

A couple of days after Betty was admitted to the hospital, Curtis began feeling weak. Tim took him to Harris in Fort Worth, and he eventually tested positive for COVID-19, too.

Though his dad was more frail, Tim’s mother was failing faster.

And she told him she was ready to die, in a painful phone call.

But the hospital staff knew it was.

They allowed Tim and his sister one final visit.

“We were all saying our goodbyes and mom said, ‘OK, see you tomorrow.’ And she died laughing.”

Tim choked back tears. “She knows there’s not a tomorrow.”

After 53 years of being married to each other they died within an hour of each other, in the same room with each other.

RELATED: Here are the confirmed cases of coronavirus in Tarrant County

Loss is excruciatingly lonely, made worse by the fact that Tim is now in isolation, too.

“I’ve seen firsthand how it affects your body,” he said. “It’s designed to take over your body one cell at a time.”

Tim is a triathlete. He is the personal trainer to Fort Worth Mayor Betsy Price, who is now in isolation as well because she’d been exposed to Tim.

The Tarpleys donated their bodies to science. A celebration of their life will likely be held around the year anniversary of their deaths.

They may never know how the couple caught the virus. Tim had been taking care of them over the last few months, but Betty had been to the grocery store a few times.

Tim has been shocked to find out how many people are sharing stories about the special things his parents did for them – like feeding friends who were down on their luck.

Tim worries North Texans have gotten complacent about this virus.

“Be more aware of what you’re actually doing,” he said.

But his final text to his mother reveals he thought much more of them than that.