Parents say indecision, late planning by school districts are forcing them to come up with alternatives

Experts say families pulling their children out of schools for 'school pods' could hurt public education in the long term. 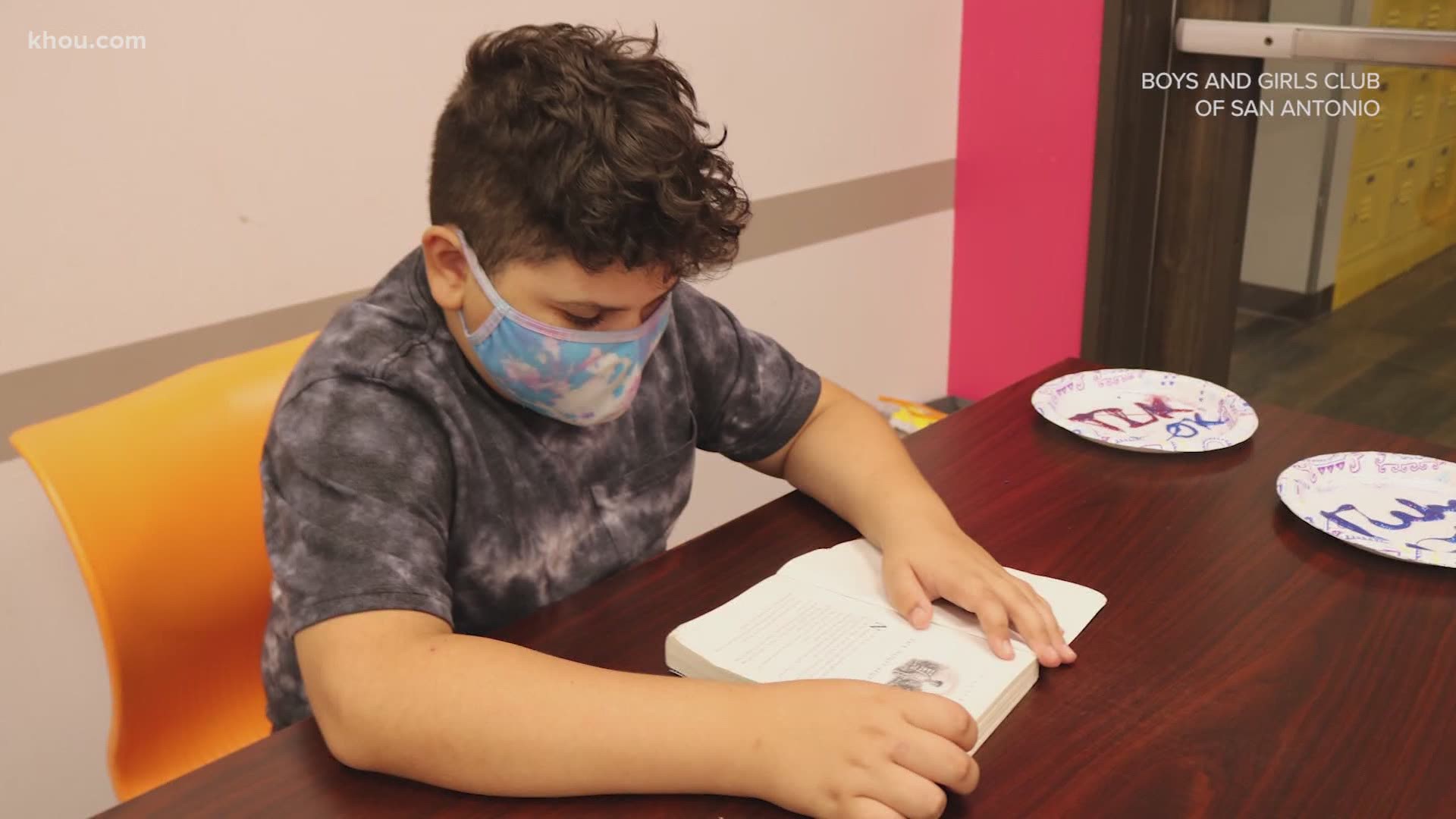 HOUSTON — Some parents say indecision and late planning by their school districts are forcing them to come up with education alternatives, such as pulling their kids out of public schools, creating small teaching pods, hiring tutors or choosing homeschooling.

Nonprofits are stepping in to help parents who can’t afford tutors and providing different levels of instruction assistance for students taking virtual classes.

“We watched as this phenomenon that these learning pods have just taken off throughout the country and in Texas,” said Angie Mock, CEO of Boys and Girls Club of San Antonio. "And what we've decided to do is we are going to execute a similar strategy, but for low income kids.”

Mock said the Club will offer full-day programming. She said their kids will get virtual learning help during school hours and will be able to stay for the traditional after school programs.

“We’re bringing on a number of academic aides, which is a new position for us, that will work similar to what wealthier middle-income people are doing with their private learning pods,” Mock said. “Our families are typically not families who have the luxury of working from home,” Mock said. “What's going to happen and what actually happened in this past spring was the parents either couldn't be there with their children to help them with their virtual learning or they didn't have the ability.”

Mock said the assistance with virtual learning will first be offered to current club members, and she anticipated a waiting list. Some age groups were immediately filled, when registration began Monday. The virtual classes will start Aug. 17.

The Club said it will be following the current safety standards, including social distancing and face masks. It will also have small classes with a 1-to-12 ratio in each age group. The program will be $20 per month with sliding scale for families with multiple children.

“We are that lifeline for that family that keeps that parent employed and or keeps that child safe,” Mock added. “We can help fulfill that role of keeping them on track academically with virtual school."

The Boys and Girls Club of San Antonio said the program is very expensive and started a fundraising campaign to help pay for it and outfit the kids with the equipment they need.

In the Austin area, some schools have committed to virtual-only learning, said Dr. Joan Altobelli, Vice President of Licensed Child Care Services for YMCA Austin, so the Y will help students do their virtual learning.

“We'll try to have kindergarten, first grade together and second and third and fourth and fifth, depending on the numbers of kids in the ages that they sign up for the program,” Dr. Altobelli said. “They'll be just supported. We’ll be in the room, just like mom and dad would be at home if they weren't working out of the home. We are not going to be instructing at all. We're just there to give them support.

The program is not free, but the YMCA offers financial assistance. Some of these programs will be offered in school buildings, some inside YMCAs. This link will have more information.

Dr. Altobelli said the YMCA adopted COVID-19 safety guidelines in March, because the centers provided childcare for essential workers. The YMCA used the same safety guidelines for the summer camp and will continue following these rules until the pandemic protocols change or end.

Check your local YMCA and Boys and Girls Club to see if they’re offering education help this year.

Some parents taking their kids out of public schools

Kim Murray, a mom of twins in the Dallas-Fort Worth area, said she felt her girls didn’t get what they needed with virtual learning offered through their public school this spring. And as much as they loved it, Murray said she pulled them out to home-school three days a week and do a teaching pod two days a week.

“The ISD just really disappointed myself and so many others,” Murray said. “It's kind of that faith in them that, what are they going to do if something big happens?"

Murray, a home stager, said she and her husband had already been thinking of private school for Lauren and Meghan, but the way their school district handled the COVID-19 shutdown this spring pushed them to make a difficult decision.

“If there was a plan, a quicker plan in place, I am pretty positive we probably would have kept them in public school just because we would have felt a little bit more reassured by the school district,” Murray said. “What's going to happen if something happens in the schools and we don't want them to be in and out, in and out."

Murray said she is not a teacher.

“I would like to think I'm a teacher, but it's no, not a teacher,” she said, laughing.

She’s in the process of buying homeschooling materials and setting the whole thing up. Murray said she’s going to try it for a year and then re-evaluate.

Murray said she’s grateful she could do that for her 10-year-old twin daughters.

“I'm nervous, because it's just this is something new that we've never done,” Meghan Murray said.

“I’m excited, because it's just, it's exciting just to do something new,” Lauren Murray said.

The Murrays will attend Danielle O’Donnell’s teaching pod, Parker County Scholars. O’Donnell said she was running a music academy in the spring. A kindergarten through 6th grade teacher with training in special education, she helped some kids with online learning when schools shut down. Once the year ended, parents asked her to teach their kids again, she told KHOU 11.

“Word kind of got out in our community. I was doing for fifth grade,” she said. “All of a sudden now I have, like, 40 kids that, you know, are in different grade levels.”

O’Donnell said by her count, about 30 families un-enrolled from public schools and have joined her pod twice a week.

“When you go to public school, I mean, even the school I used to work out was a smaller school, at the end of the day, there's still 300 kids in the school sharing the same bathrooms and things like that,” she said. “Here it's eight kids at a time. We're going to be sanitizing throughout the day. There's only eight kids to keep track of for hand washing, sanitizing temperature checks, you know, making sure everyone is feeling good and in good health.”

If someone gets sick, O’Donnell said the school will close and quarantine for 14 days, moving instruction online.

“It's just a crazy time. I've been talking to people that I've never met before,” O’Donnell said. “They're just so looking for something different. I'm glad that they're trusting me to educate their children.”

Children leaving public schools have an impact on public education as a whole, said Troy Reynolds, a long-time educator and the Founder of Texans For Public Education.

In Texas, schools are funded by attendance, so when there are fewer students in the class, the funding is cut.

“It is a myth that losing kids reduces expenses because you don’t lose an entire classroom at a time,” Reynolds told KHOU 11. “It will also greatly affect extra-curricular. It’s hard to field a team when students leave.”

“I believe these parents wouldn’t pull their kids if the state would even attempt to make things safer,” Reynolds added. “We need UV light units in the HVAC systems, automatic temperature scanners at the doors, waivers to allow us to reduce class size, pre-determined data points (such as positivity rate), that put the school into full remote as determined by health officials and full funding for that remote teaching. Instead, Texas is trying its best to say damn the torpedoes, full speed ahead, and ignore the safety concerns.”

Governor Greg Abbott has said protecting the health of students, teachers, staff and families was a priority.

He said the school boards had the authority to shut down.

“In making that decision, school boards have the ability to base their decisions on advice and recommendations by local public health authorities but are not bound by those recommendations,” Abbott said in a recent statement.

If parents can choose to leave public school and go the Parker County Scholar route, it will cost $299 a month per child per month for a year-long commitment or $329 month by month. Hiring a tutor or a teacher could cost between $30 to $70 per hour. You should check if they’re board certified, which is free through the TEA’s State Board for Educator Certification website.

Experts say that’s one way to make sure you’re making the right choice.

Leah Griffin, a marketing executive living in Toledo, Texas, went as far as hiring a teacher for the micro-schooling pod she and some friends put together. It was going to be her little boy and three other kids.

“We created our little micro-schooling pod. We were all under the impression that school would not be happening,” she said.

Not long after, schools started announcing openings, and her friends decided to put their kids back in school.

“We're like, if everyone is going back, do we want our kid to be the only one that doesn't go back, especially when he's dying for social interaction, he's dying to go back to school?” she said.

The micro-schooling pod is now canceled. Griffin’s son is going back to school.