Travelers from states with high infection rates will need to quarantine for 14 days. 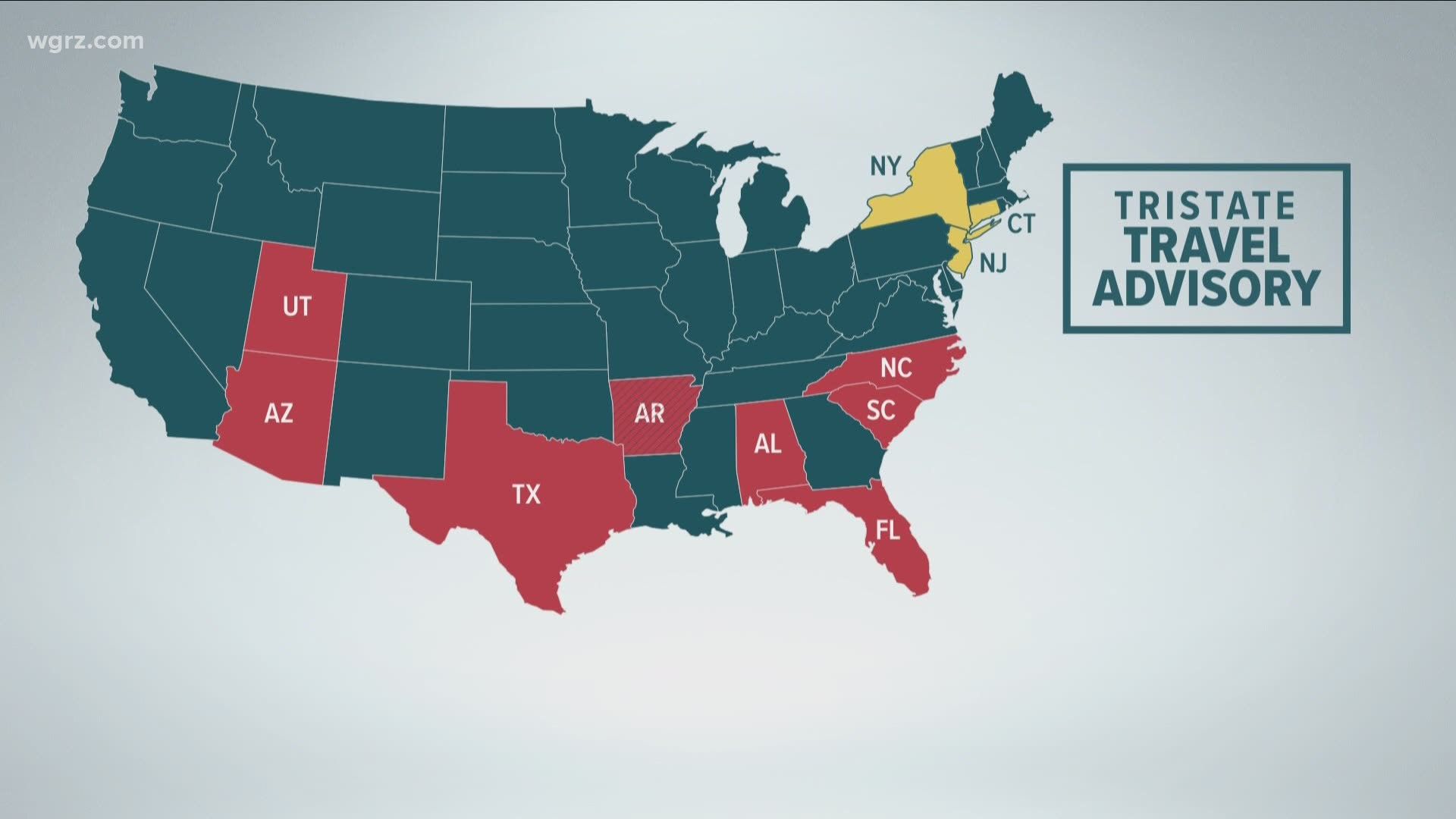 NEW YORK — New York Governor Andrew Cuomo, along with the governors of New Jersey and Connecticut, announced Wednesday an immediate travel advisory for those coming into the three states from states with high infection rates. The advisory takes effect at midnight Wednesday.

Travelers from states with high infection rates will need to quarantine for 14 days. Right now, that includes Alabama, Arkansas, Arizona, Florida, North Carolina, South Carolina, Utah and Texas. However, Cuomo said the list of states can change as the infection rates change.

Washington was originally on the list. However, according to the AP, a spokesperson for Cuomo said Washington had been removed after a discrepancy in that state's reporting was corrected.

States on the list will be updated daily and will include those with ten cases per 100,000 people or ten percent of the total population based on a seven-day rolling average.

Cuomo said New York, New Jersey and Connecticut have worked hard to get the transmission of COVID-19 down and they don't want to see it go up again. Erie County Executive Mark Poloncarz addressed the announcement in his weekly coronavirus briefing.

"If you go down to vacation and you're going to South Carolina and you come back, under the rules you've gotta quarantine for 14 days," Poloncarz said. "If you've got family or friends coming up from Texas or Arizona or one of the other places and they're here for a week. Well, they basically have to be inside for a week."

There are penalties for travelers who don't comply and get caught.

Cuomo said, "If you are violating the quarantine, you can be subject to a judicial order and mandatory quarantine."

They could also face fines.

On a local level, we still don't know the specifics as to how it will be enforced. However, in an interview with WAMC radio, the governor said he anticipates people will by enlarge comply.

"I think if you violate it, I think the odds are very high somebody's gonna blow the whistle on you," Cuomo said.

He added, "You never enforce every law 100 percent. You don't follow every driver to make sure they don't speed but if people know you are enforcing the law, then they don't want to break the law for fear that they will get caught."

North Carolina's governor, responding to NYS's visitor quarantine rule, said he doesn't agree with it. North Carolina is one of the state's that is seeing an increase in COVID-19 cases.

"I don't agree with the state's in the northeast," said Gov. Roy Cooper. "I think that's going to cause problems for families and for businesses. I think we all have to realize we're in this together."

Cuomo announced in New York, the total number of hospitalizations is at the lowest point since March 19. On Tuesday, statewide 51,144 tests were done, with 581 or 1.1 percent positive. In the WNY region the rate of positive tests Tuesday was one percent and 17 lives were lost.

Five regions, including the GLOW region of which Genesee, Orleans and Wyoming counties are a part, are on track to enter Phase 4 on Friday. Phase 4 includes:

Also, under Phase 4, indoor religious gatherings will be able to increase occupancy up to 33% up from the current 25%. Social gatherings of up to 50 people will now be allowed, up from 25 in Phase 3.

Cuomo said the state continues to study the impact of certain activities, including malls, movie theatres and gyms. He said they are looking at what's happened in other states, including looking at whether or not air conditioning in these places may be recirculating the virus.

In news for baseballs fans, Cuomo was asked if he's heard if the Toronto Blues Jays, parent club of the Buffalo Bisons, might play its games in Buffalo or somewhere in WNY, he replied that he did not know if that conversation has been had yet. 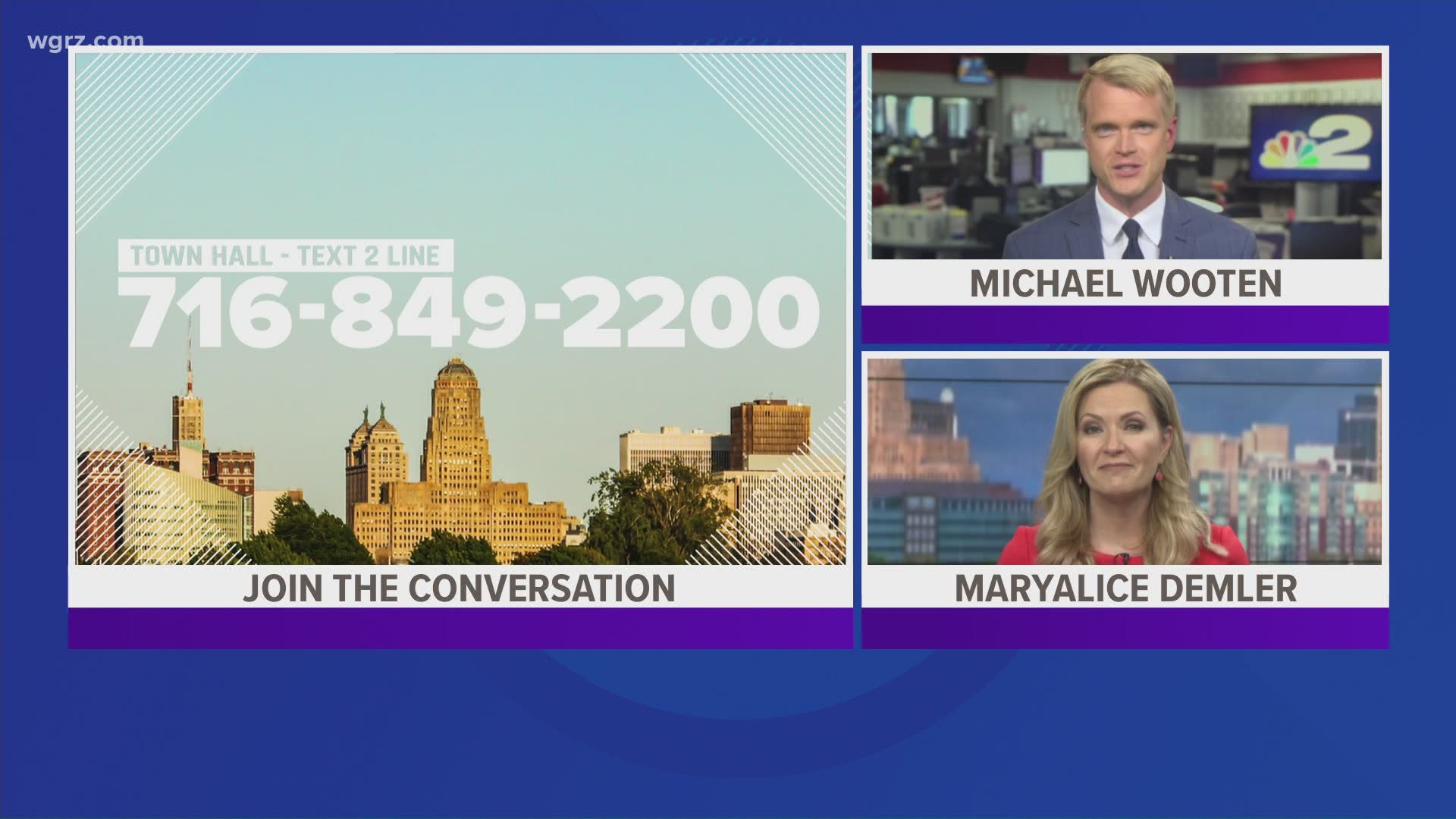 RELATED: FDA warns 9 brands of hand sanitizer may be toxic