As of Friday morning, two major counties in the Dallas-Fort Worth area have mandated face-covering orders in efforts to slow the spread of the novel coronavirus. 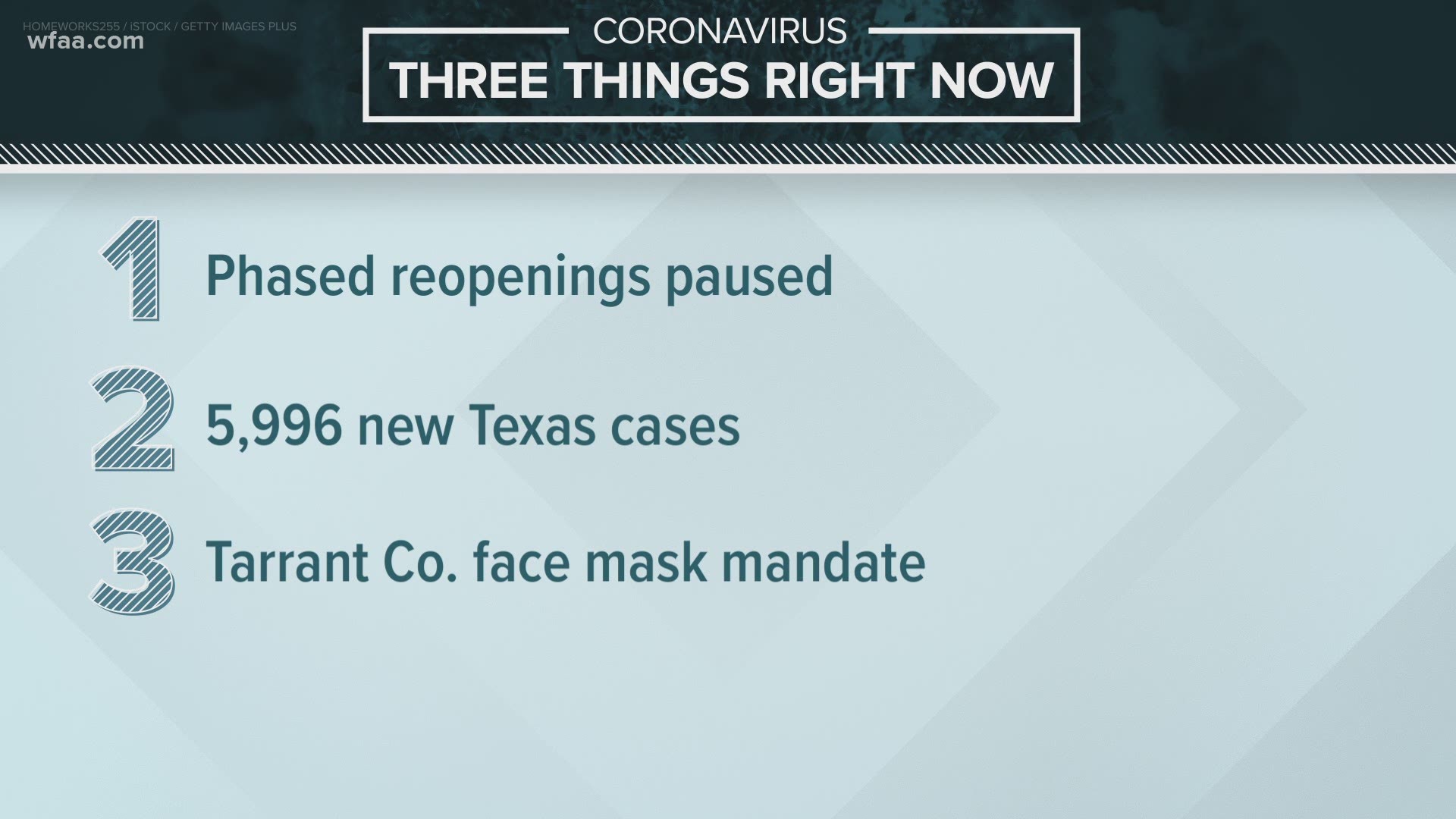 Dallas County health officials have reported 10 additional coronavirus-related deaths, including a man in his 60s who was found dead in his home.

Officials also announced there are 469 new cases of the disease, a new record-high of daily cases in the county.

The previous record was reported on Monday with 454 confirmed cases.

As of Friday, both Dallas and Tarrant Counties have mandated face-covering orders in efforts to slow the spread of the novel coronavirus.

The new face mask order will go into effect at 6 p.m. in Tarrant County. The mandate comes just one day after county officials announced a record-high number of 517 cases.

"We tried voluntary compliance, but, folks, we just weren’t seeing it. We need your help; we need you to follow these orders; we need you to mask up,” Fort Worth Mayor Betsy Price said at a Thursday morning news conference.

The order is in effect until Aug. 3, and it requires anyone entering a business or outdoor event of more than 100 people to wear a mask.

Shortly after the mandate was issued, one city said it won’t be enforcing it. The City of Colleyville released a statement on Facebook that partially reads:

“The City of Colleyville will not adopt any formal action enacting this measure nor provide enforcement. Questions regarding the regulation should be directed to Tarrant County.”

In addition to mask mandates issued in Dallas and Tarrant Counties, there has been a "pause" in the reopening of Texas.

According to Texas Department of Health and Human Services, there are 4,739 patients hospitalized due to COVID-19 as of 4 p.m. Thursday.

“At some point, we are all going to run out of room – not just my hospital – everyone’s. That’s the message that’s got to get out there. Folks have got to help us out,” said Dr. Joseph Chang, chief medical officer of Parkland Hospital in Dallas.

For a daily roundup of the biggest coronavirus news from around North Texas and beyond, sign up for the WFAA COVID-19 email newsletter.

The county also reported four additional deaths but did not release detailed information on the people who had died from COVID-19.

There have been 10,706 cases of the coronavirus tallied since tracking began in March in Tarrant County.

Health officials have reported 222 people in the county have died from COVID-19.

There have been 41 deaths and 1,954 recoveries since tracking began in March.

There were also 10 additional deaths reported. There have been 344 deaths in the county due to COVID-19, according to health officials.

The latest deaths include:

The Catholic Diocese of Dallas announced weeks ago that Sunday masses could resume in person this weekend, but Bishop Edward Burns announced Friday that the decision will be left to individual parishes.

"The decision to resume Sunday masses was made weeks ago before the spike and warnings that have come as a result of the coronavirus statistics that we are seeing at this time," Burns said in a written statement.

The bishop said that the pastors of the parishes will be allowed to decide whether to host in-person mass. The Diocese has parishes in nine counties, Burns said.

Gov. Greg Abbott has issued an executive order that requires bars and similar establishments that receive 51% of their gross receipts from alcohol sales to close at 12 p.m. Friday.

The measure also requires restaurants to reduce occupancy to 50% on Monday.

The order comes just one day after Abbott announced a pause of further reopening phases in the state due "to the recent increase in positive COVID-19 cases and hospitalizations."

n addition to the latest restrictions, rafting, and tubing businesses in the state must close and any outdoor gatherings of 100 or more people must be approved by the local government officials.

Starting Tuesday, the Fort Worth-based airline will ask customers during check-in to "certify they have been free of COVID-19 symptoms for the past 14 days." Customers will go through a checklist of potential symptoms that was created in partnership with Vanderbilt University Medical Center.

American said Friday that it will continue to notify customers of full flights and let them change flights at no cost. The airline said in a release that they will provide flexibility for tickets booked through Sept. 30.

The City of Garland has decided to temporarily close Windsurf Bay Park due to safety concerns over COVID-19.

The announcement was made Friday morning on Twitter. City officials say law enforcement is unable to patrol large crowds at the park at all times.

A reopening date has not been released at this time.