Here are the latest COVID-19 updates, closures and postponements in Central Texas for Saturday, May 16. 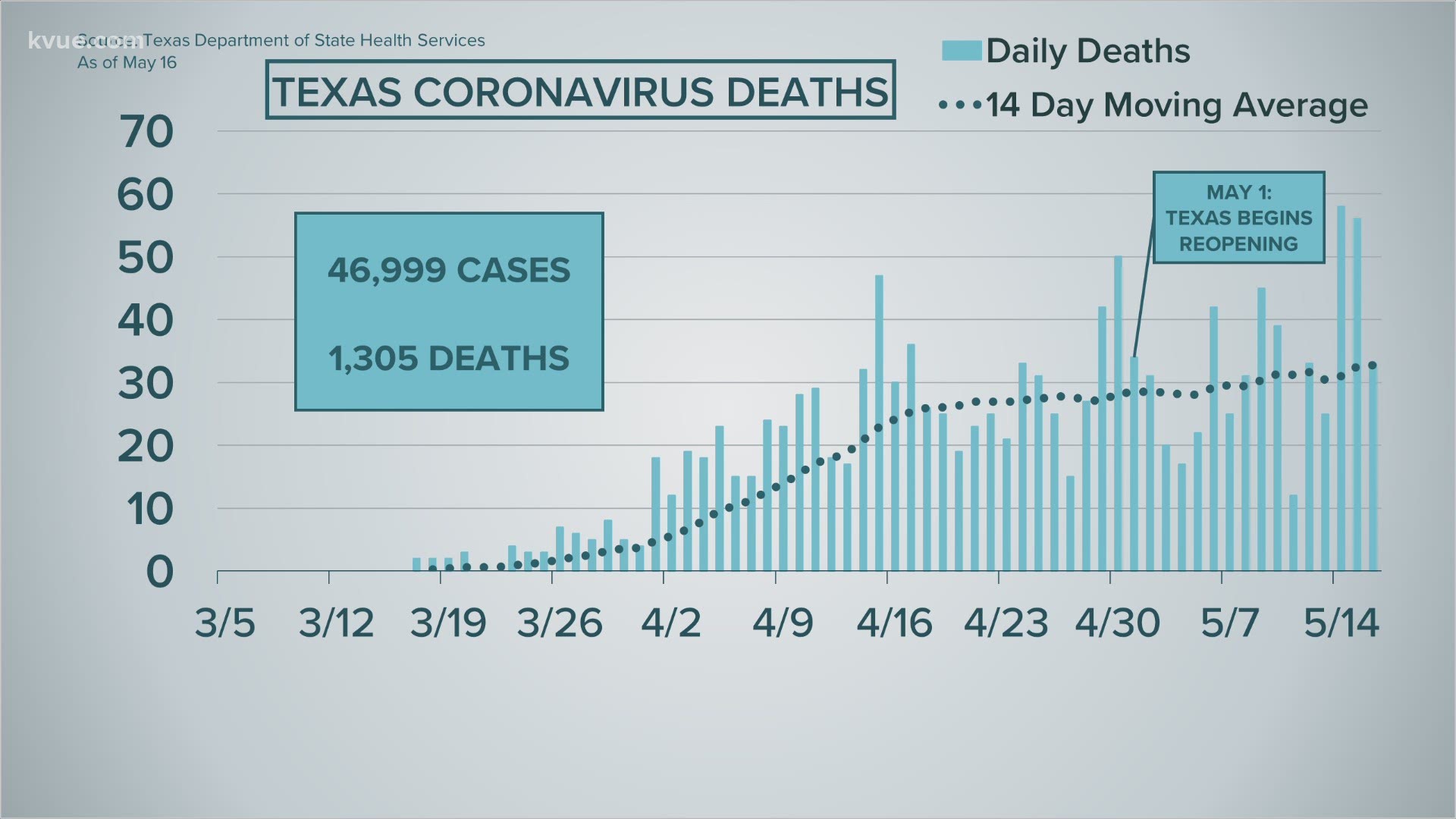 Scroll down for the top headlines and latest updates in KVUE's May 15 live blog.

9:40 p.m. – On Monday morning, the Austin Emergency Supply Foundation, in partnership with the City of Austin, will donate face masks to be distributed by the Consulate General of Mexico and the Society of St. Vincent de Paul Diocesan Council of Austin. The city said the donation is part of an effort to protect Austin construction workers.

6 p.m. – Travis County reported another 44 confirmed COVID-19 cases on Saturday, bringing the total to 2,425. There have been 77 deaths in the county, while 879 people have recovered from the virus.

4:10 p.m. – The latest data for coronavirus in Texas show a jump in daily cases, which is expected as the state conducts more testing. Meanwhile, the seven-day positivity rate average is below 5% for the first time since tracking began.

3:45 p.m. – Gov. Greg Abbott said Texas health officials are responding to a surge in cases in Amarillo meat packing facilities uncovered as part of a targeted testing strategy. Abbott said Texas is seeing the results of tests conducted by personnel from the Texas Emergency Medical Task Force and 70 members of the Texas National Guard, who were sent to Amarillo on May 4.

On Saturday, Amarillo reported more than 700 new confirmed positive cases of COVID-19, which Abbott said was a result of targeted testing. He said plants with widespread outbreaks have temporarily shut down for disinfection. The Texas Department of State Health Services is maintaining an alternate care site for patients who do not require hospitalization, while those who test positive and cannot isolate are offered area hotels. The governor said he is sending an additional allotment of antiviral drug remdesivir to the Amarillo area.

"As Texas continues ramping up its testing capabilities, there will be an increase in positive cases as the state targets the most high-risk areas: nursing homes, meat packing plants and jails," said Abbott. "That is exactly why I established Surge Response Teams. By immediately deploying resources and supplies to these high-risk areas, we will identify the positive cases, isolate the individuals and ensure any outbreak is quickly contained, which is the strategy being deployed in Amarillo."

11 a.m. – Austin Public Health will be performing maintenance and upgrading its COVID-19 tracking digital dashboard on Sunday, May 17. The site will be down throughout Sunday and the work is expected to be completed by 6 p.m.

According to APH, the updated dashbard will feature more data, including the following:

8 a.m. –  The Central Texas Food Bank food distribution event that was scheduled for Saturday will now be held Sunday from 8 a.m. to 1 p.m. at ACC Highland. Volunteers ask that everyone stay in their cars so they can bring the emergency food kits to them. Here's how the process works.