Here are the latest coronavirus updates, closures and postponements in Central Texas for Monday, March 16. 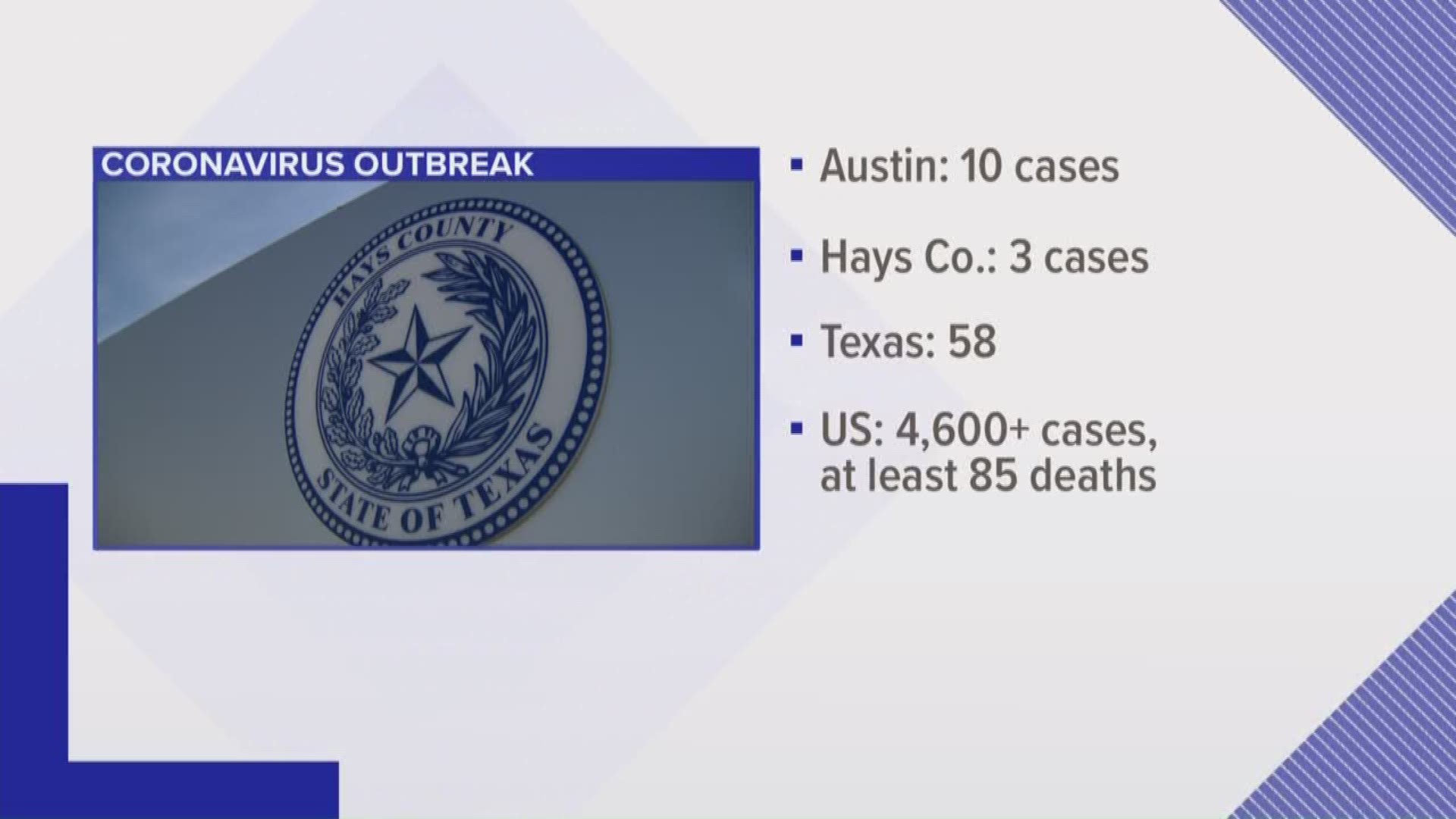 KVUE has been working to provide coverage and information regarding COVID-19 locally and worldwide.

March 16, 8:40 p.m. — Alamo Drafthouse Cinema announces all locations are closed until further notice. All shows have been canceled and all tickets will be refunded.

March 16, 8:18 p.m. — Mayor of Hutto issues a declaration of disaster for the City of Hutto, effective immediately.

March 16, 8:16 p.m. — Favor waives commission fees for restaurant partners through the end of March. The company said they will also not increase delivery fees during high-demand times and will provide four weeks of financial assistance to eligible "runners" diagnosed or put under quarantine by a medical professional.

March 16, 7:40 p.m. — City of Austin postpones meetings and action related to the Land Development Code revision, including the meetings scheduled for March 24, 28 and 31 and April 1, 2 and 7.

March 16, 5:41 p.m. — Numerous events held at Pease Park, including Eeyore’s Birthday Party, have been canceled to help reduce the risk of COVID-19 to the Austin community and flatten the curve.  Here is a list of Pease Park events that have been canceled:

March 16, 5 p.m. — The 2020 Austin Reggae Fest scheduled for April 17-19 has been canceled. Event refunds will be offered through Eventbrite.

The Hays County Commissioners Court votes to extend Judge Bacerra's local state of disaster for the county to a period not to extend 120 days unless the declaration is rescinded or there is subsequent action by the court.

March 16, 4:35 p.m. — City of Taylor closes the public library, all City buildings and the municipal court through March 31; cancels all scheduled programs, activities and rentals at Taylor parks through May 11; and cancels Kite Day on March 28 and the Easter egg hunt on April 11. The City also said the animal shelter will only be open for reclaims and adoptions and no owner surrenders will be accepted through March 31.

March 16, 4:20 p.m. — Mayor of San Marcos probits gatherings of 50 people or more anywhere within the City of San Marcos, effective at 2 a.m. Tuesday and continuing until May 11. The order does not pertain to transit, retail establishments, offices, medical offices or facilities or schools. The City is also closing the public library, activity center, senior center and discovery center until May 11, effective at 5 p.m. on March 16, and canceling all City-sponsored public gatherings, senior programs and programs of more than 50 people.

March 16, 4:00 p.m. — Bastrop County announced it had suspended school for two weeks following spring break, made a local disaster declaration, banned gatherings of 50 people or more and said violators of the banned gatherings prohibition would be subject to fines.

March 16, 3:40 p.m. — Texas Cable Association says it is working to provide members with high-speed broadband. The organization stated that Altice USA, Charter Communications, Comcast and Sparklight have all signed the FCC's "Keep Americans Connected Pledge," which promises that they will not cut off broadband or telephone service to any customers for the next 60 days, they will waive late fees incurred because of economic circumstances related to coronavirus and they will open Wi-Fi hotspots to all.

March 16, 2:10 p.m. — Williamson County Judge Bill Gravell has issued an order stating community gatherings of 50 people or more anywhere in Williamson County has been prohibited for the next eight weeks to slow the transmission of COVID-19.

March 16, 2 p.m. — Hays County has reported its second case of coronavirus. Officials released limited details about the second patient but said the first patient is believed to have contracted the illness while traveling on the West Coast of the United States.

March 16, 11:16 a.m. —  The Old Settler's Music Festival announced it was postponed and would reschedule for the fall. Organizers said the date will be announced as soon as it's confirmed.

March 16, 10:30 a.m. — The United States surgeon general said the number of cases in the U.S. is level with the level of cases that were in Italy two weeks ago. Read more.

March 16, 10:12 a.m. — The City of Taylor issued a declaration of a local state disaster, giving the City the ability to “take measures to reduce the possibility of exposure to disease, control the risk and promote the health and safety of individuals in Williamson County,” according to the declaration.

March 16, 9:09 a.m. — Circuit of the Americas has confirmed they have laid off some of its employees after it canceled several events due to concerns surrounding coronavirus.

March 16, 12:18 a.m.  — City officials have confirmed the number of people who have tested positive for COVID-19 in the Austin-Travis County area is now up to six. Read more.

KVUE is working to continue providing accurate information and will update this blog as more information becomes available.