Travis County district judges to allow people with certain low-level, non-violent felonies to be released from jail on personal bond

According to the Travis County District Attorney's Office, this measure was under consideration before the coronavirus State of Emergency.

TRAVIS COUNTY, Texas — Travis County district judges have issued an order that will allow certain people charged with low-level, non-violent felony crimes to be automatically released from jail on a personal bond.

Offenses that the automatic bond is available for include possession of a controlled substance, credit or debit card abuse, prostitution, theft and other low-level felony crimes. Exceptions include people who are charged with a new offense while on pre-trial release, those who have a warrant for failing to appear in court or a bond forfeiture or those who have a parole revocation, among others.

You can see a full list of offenses and exceptions below: 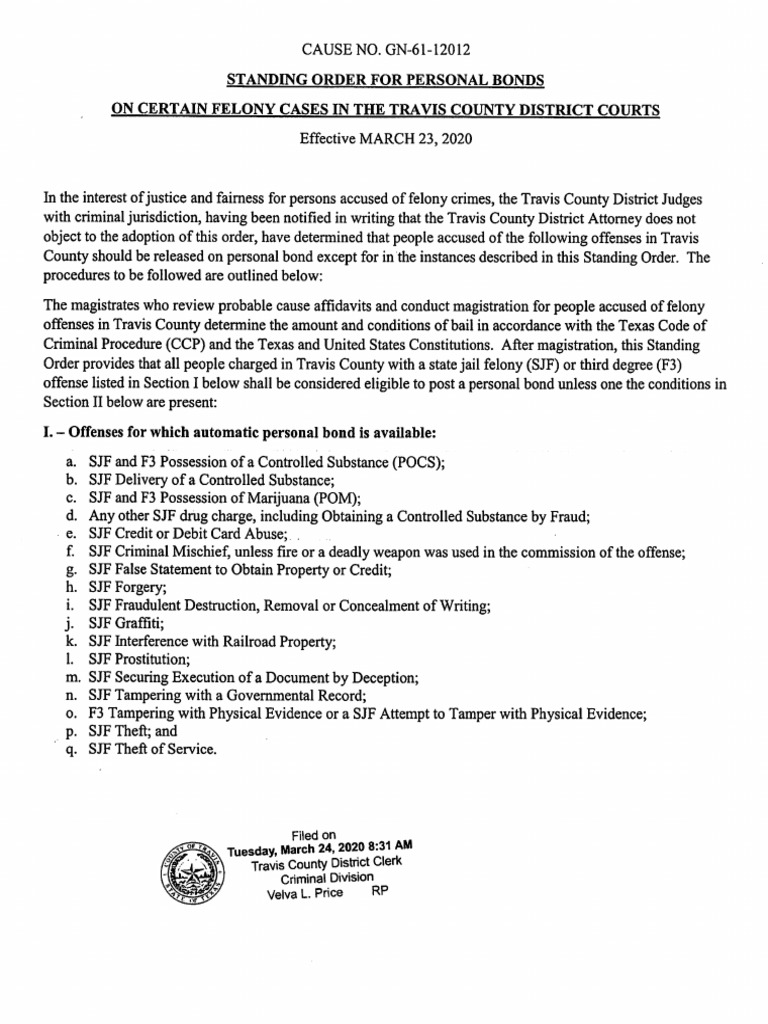 According to the Travis County District Attorney's Office, this measure was under consideration before the coronavirus State of Emergency. The DA's office said discussions about the order have been underway for weeks, although the impact of the order will "hopefully have a positive effect on the number of persons introduced into the jail population."

"With the entry of this standing order, Travis County is at the forefront of reforms to minimize incarceration while still ensuring the safety of the public. It is particularly significant to implement this policy now when we are all laser-focused on preventing the introduction of COVID-19 into our jail," DA Margaret Moore said.

According to the DA's office, this standing order for personal bonds is the result of numerous meetings and discussions among the Travis County criminal justice stakeholders. DA Moore and Travis County Attorney David Escamilla played significant roles in the order's development.