The Arkansas Department of Health has confirmed 46 COVID-19 cases throughout the state. 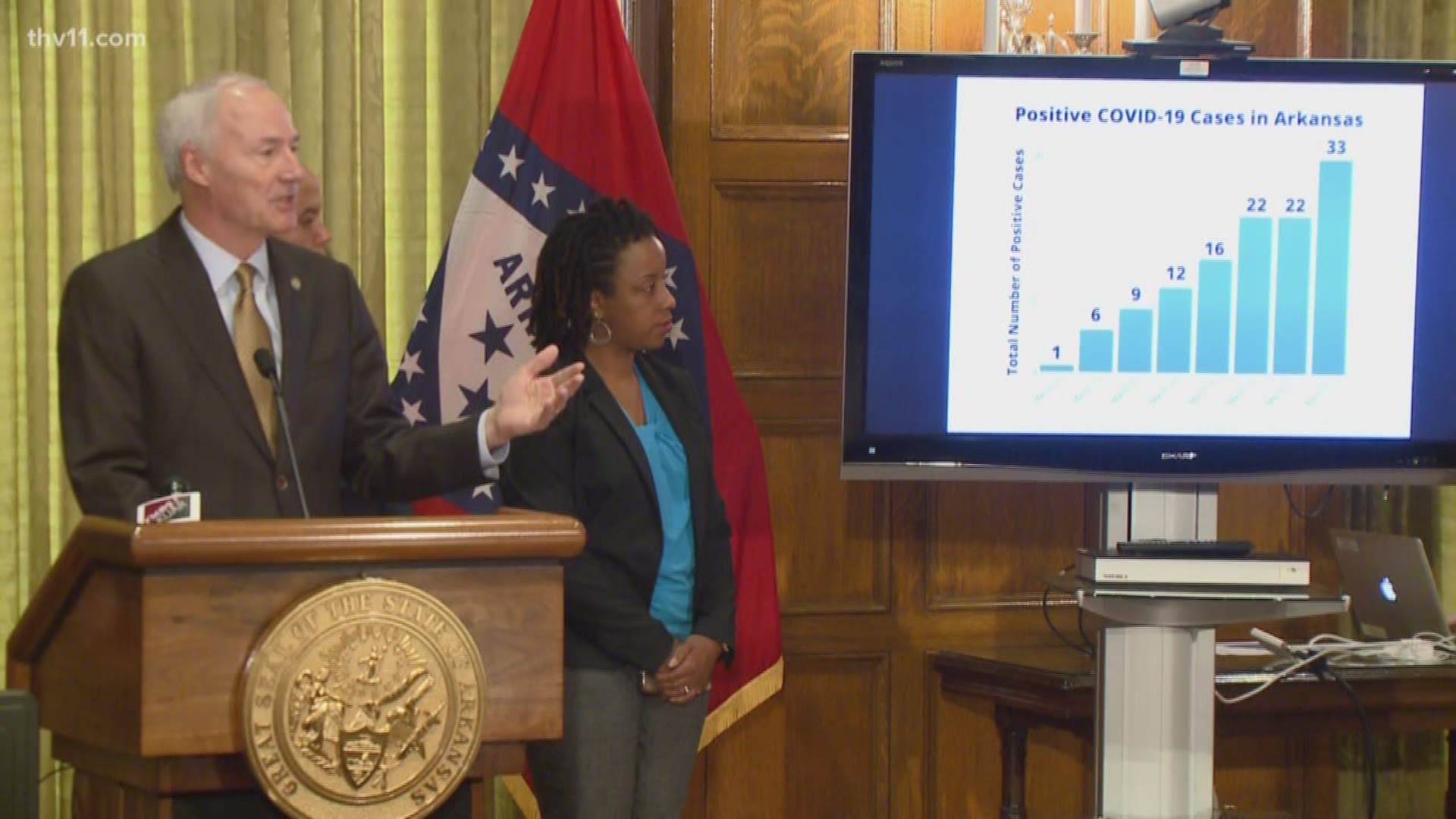 KFSM reported that Washington County officials sent out a press release saying they were notified of the first presumptive positive test for COVID-19 in the county.

So far, the Arkansas Department of Health has reported 46 COVID-19 cases in the state as of Thursday, March 19.

The Arkansas Department of Health is now reporting that there are 46 confirmed cases of COVID-19 in the state.

113 people are under investigation and 441 people are being monitored while 310 have tested negative.

The University of Arkansas-Fayetteville has announced that students must move out of their residence halls and any other university housing, including Greek houses, by April 3.

The Arkansas Department of Health has confirmed 37 COVID-19 cases throughout the state.

All Simon Property Group malls, outlets, and mills in the U.S. will remain closed until March 29, including McCain Mall in North Little Rock. READ MORE: McCain Mall temporarily closing due to coronavirus concerns

MEMS has 4 employees in quarantine after they met criteria due to exposure to a patient. None of them are showing symptoms and are said to be "doing fine."

The protocol is to test when showing symptoms, so none have been tested and are halfway through the quarantine period.

Approximately one-third of confirmed positive COVID-19 cases in Arkansas are linked to the first case that was announced out of Jefferson County just one week ago.

The patient was admitted the week before to Jefferson Regional Medical Center in Pine Bluff with severe symptoms. The patient had an out of state travel history.

The City of Hot Springs announced a declaration of emergency Wednesday and adopted an ordinance that will allow the city to establish a curfew and other additional measures.

Gov. Hutchinson also said he is not closing the borders of Arkansas at this time.

Gov. Hutchinson said that one COVID-19 patient who was severely ill has "turned the corner" and will likely go home in the coming days.

Dr. Smith said a number of patients in Arkansas have recovered from COVID-19 symptoms so far, but they could potentially still be shedding virus. Smith still advised those patients to remain quarantined.

"I expect the cases will go up and we have to make a decision on what life will look like, but we are planning to go to school March 30," Hutchinson said.

Cindy Gillespie with the Department of Human Services said although more than 800 childcare centers are closed, there are about 1,200 still open and the state wants to support those still open.

Gov. Hutchinson announced that Arkansas is suspending the work requirement through the end of April for SNAP benefits.

"We're taking responsibility ourselves," Hutchinson said. "We're trying to engage in procurement at the state level, but it needs national guidance."

Hutchinson announced that the state is allocating $12 million of community development block grant funds for relief for companies and nonprofits.

The priority will be for hospitals and medical-based businesses.

Hutchinson also said that the state will use $4 million from the quick action fund for bridge loans for mid-sized firms to make payroll and state in operations.

For small businesses in Arkansas that need assistance because of the pandemic, you can go to arkansasedc.com/covid19.

Dr. Nate Smith said the Arkansas Department of Health has evidence of some community spread in the Little Rock area, but the department is still investigating.

Smith said of the 11 cases announced Wednesday, "The origin is either out-of-state travel or known contact with already existing cases."

Gov. Hutchinson announced there were 33 confirmed COVID-19 cases in the state during a press conference.

Of the 33 confirmed cases in Arkansas:

"Everyone needs to rethink the risk of travel," Hutchinson said in regards to the upcoming spring break.

The Fayetteville woman that has test positive for COVID-19 is reportedly a student in her 20s that goes to a school in New York.

In a now deleted social media post, she said she had "flu-like symptoms" for one day.

The Arkansas Department of Health updated its COVID-19 page to report that there are now 30 confirmed cases in the state.

In addition, 50 people are now under investigation and 377 people are being monitored by the health department.

So far, 236 people have tested negative for coronavirus in the state.

Officials in Washington County and the City of Fayetteville were notified that one of it residents had a presumptive positive COVID-19 test.

This is the first reported case in Northwest Arkansas.

The following counties have at least one confirmed case of COVID-19:

We will update the article with new information as it becomes available.

RELATED: Coronavirus live blog: Cases now in all 50 states and D.C., US death toll over 100