On May 20, doctors diagnosed Annie Miller with COVID-19. On Aug. 3, she finally went home. 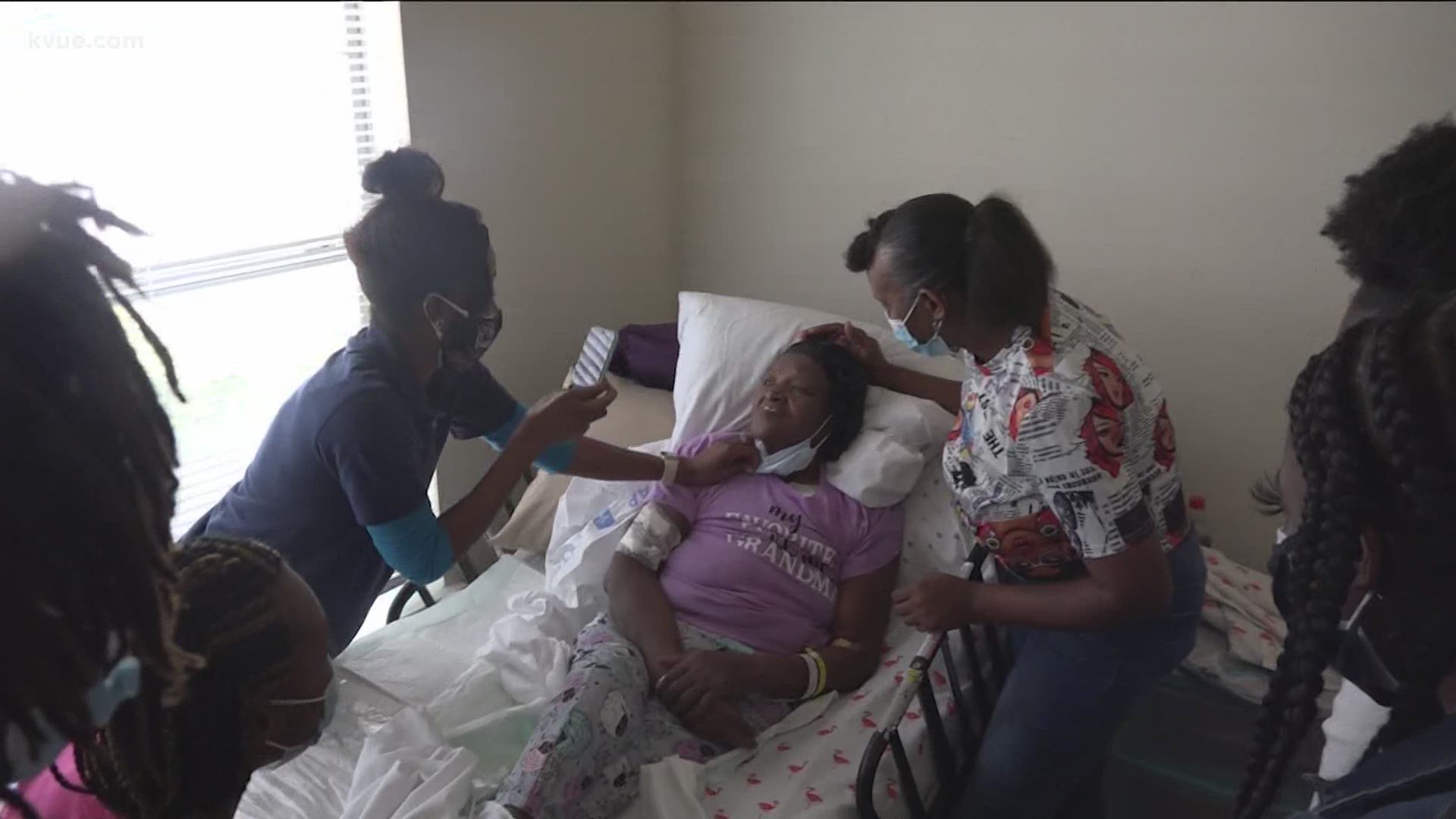 GEORGETOWN, Texas — For her birthday on April 23, Annie Miller celebrated 77 years surrounded by family singing one of her favorite songs: "Tennessee Whiskey" by Chris Stapleton. Almost one month later, doctors diagnosed Miller with the coronavirus.

According to her granddaughters, Quita and LaTrina Miller, Annie Miller visited a Williamson County hospital and was released 48 hours later.

"We thought, because they released her, that meant there was nothing more they could do," LaTrina Miller said.

"I called [the family] saying, 'I don't know what to do, I need help,'" Quita Milller said.

"We came over the next morning and, by midnight that night, we decided to send her to another hospital in New Braunfels," LaTrina Miller said.

Annie Miller bounced around a few hospitals overall, then had to attend rehab after being on a ventilator for almost two months.

RELATED: 7-year-old Texas boy recovering from battle with COVID-19 after 12 days on ventilator

"Before COVID, she was very independent," Quita Miller said. "She would be able to walk on her own, get dressed, but we would give her some assistance. COVID totally knocked her down. We will be helping her with everything."

For a while, Annie Miller was not able to speak because of the virus's effects on her body. After her time in rehab, Annie Miller was able to use her hands a bit again, but she still can't do much else. During her time fighting the virus, she had feeding tubes inserted to help her get the nutrition she needed. Those scars are still healing.

While in the hospital and rehab, Quita Miller was the only family member allowed to visit her in person. Other family members all visited Annie Miller as well, but had to stand outside a hospital window to talk with her. When the family would call her room, a nurse would answer and give the phone to Annie Miller. At times, the nurse would have to act as a go-between for the conversations.

COVID RECOVERY: a woman in Georgetown is finally home after being in the hospital and rehab since May 20!

On Monday, Annie Miller finally returned home to be surrounded by family again. According to her granddaughters, she tested negative for the virus twice in the past two weeks during rehab.

She'll be moving back in with Quita Miller in Georgetown. When asked how she's feeling now...

"I feel like a hundred dollars," Annie Miller said. "I'm so glad to be back here."

"Now we know who to say when answering, 'Who's the strongest person you know,'" LaTrina Miller said. "She is."