The City of Austin has provided details on the age ranges. 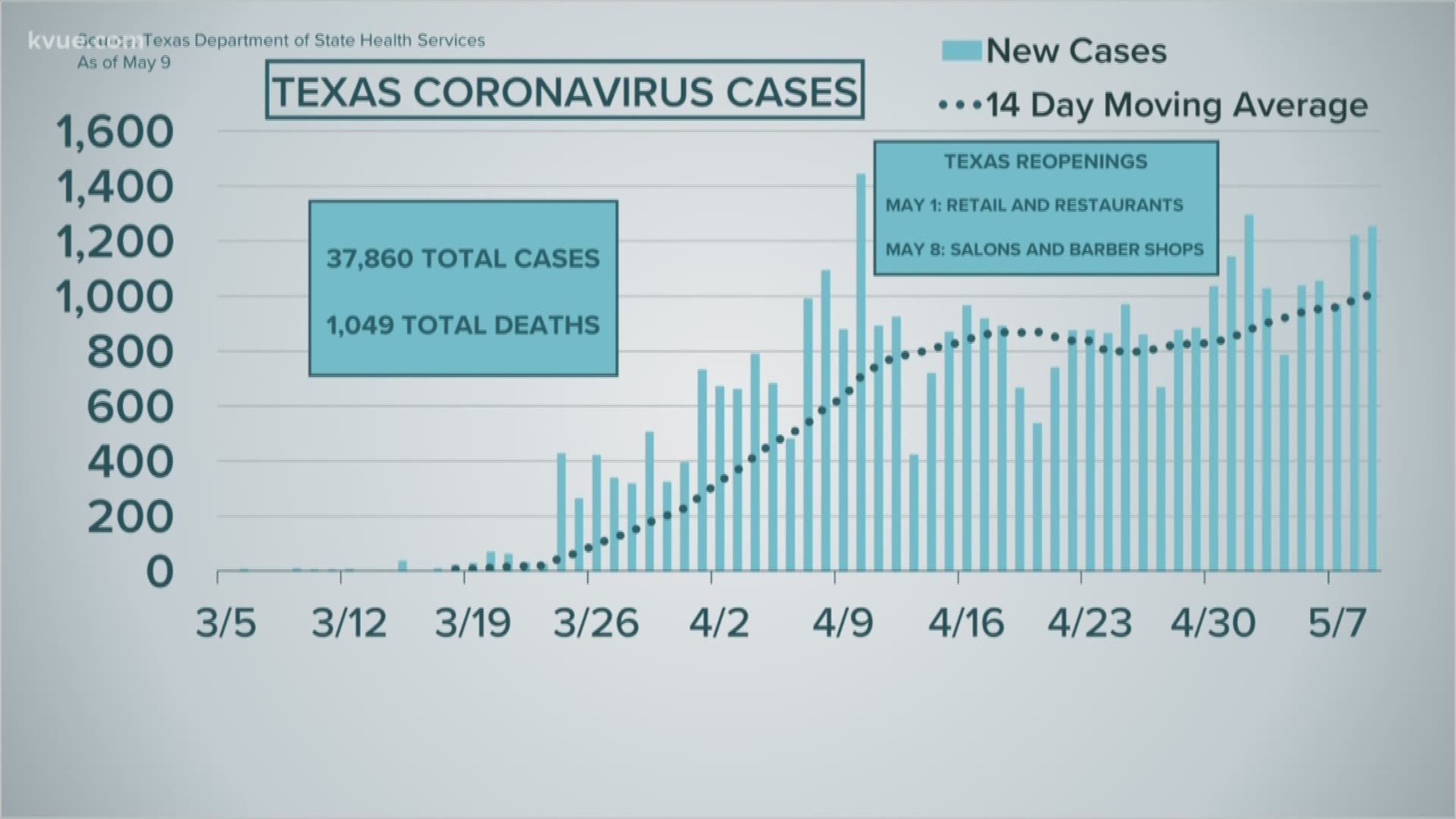 AUSTIN, Texas — As of May 28, Austin city officials have confirmed that the number of people who have tested positive for coronavirus in the Austin-Travis County area is now 3,124.

Ninety-two deaths have now been reported along with 1,114 recoveries.

On May 5, Austin Public Health said more than half of Travis County's deaths have been from nursing homes or long-term care facilities.

For an age breakdown of those cases, see the Austin-Travis County online dashboard.

APH is actively monitoring the evolving situation in coordination with the Texas Department of State Health Services, the Centers for Disease Control and Prevention (CDC), and local and regional public health and healthcare agencies.

Early in the morning of March 13, APH said the area's first two "presumptive positive" cases were confirmed in Austin.

City leaders urged the Austin-area public to not "panic," but to prepare and practice personal hygiene.

The City of Austin said the three cases confirmed on March 13 were not believed to be community spread. This means the illness did not come from an infected person that they came in contact with, health officials said. "Presumptive positive" means that a specimen tested locally and is positive, but the result has not yet been confirmed by the Centers for Disease Control and Prevention.

One of the patients is a man in his 60s who is currently hospitalized, Dr. Mark Escott, Austin-Travis County interim medical authority, confirmed at a press conference Friday. He was transferred from a different, rural hospital in a different region before he was diagnosed in Austin, APH said. He is currently in the intensive care unit.

Another patient is a woman in her 30s who is quarantined at a home in Austin, Escott said. The woman, who is not an Austin native, is believed to have contracted the virus in Houston.

Neither of the cases are connected. Both patients' tests were sent to a state lab, and Escott said one of the test results was received within about 12 hours. As the APH consistently monitors the patients, officials said the department is working around the clock to figure out who the patients may have come into contact with.

Hours after the University of Texas at Austin announced that classes were canceled March 13, UT President Greg Fenves shared that his wife tested positive for coronavirus. It is unclear if this case is included in one of the three total cases the City of Austin posted online. Fenves himself was also tested for the virus, but his testing reported negative.

Escott said these cases are "concerning but not surprising and we have been prepared for the arrival of COVID-19 in our area."

“It is critical that the community continue to heed our recommendations and take personal hygiene seriously. This will be the key to ensuring that this virus doesn’t spread," he said.

"Now is not the time to panic, but to begin preparing," said Travis County Judge Sarah Eckhardt. She said now is the time to do what "our mommas" taught us, and practice good hygiene.

APH said the public is encouraged to limit the spread of the disease by following these practices:

Escott said, "we have people around the world trying to identify a medication" or a vaccine. Until then, he said, the community must use their strongest defenses: Wash your hands, don't touch your face, cough into your elbow and stay home if you're sick.

On March 12, the City extended the local disaster declaration over coronavirus concerns through April 5. The declaration clears the way for overtime pay for public health employees and opens funding for additional resources if needed, such as 24-hour operations.

APH leaders are working to "enhance community preparedness" and are evaluating additional protections for the community.

Symptoms of coronavirus include fever, coughing and shortness of breath within two to 14 days after exposure.

The City of Austin is updating its website with the most current count and information. Statewide cases are being tracked here.