Retail stores, movie theaters, restaurants and malls can reopen May 1, but are restricted to 25% occupancy. 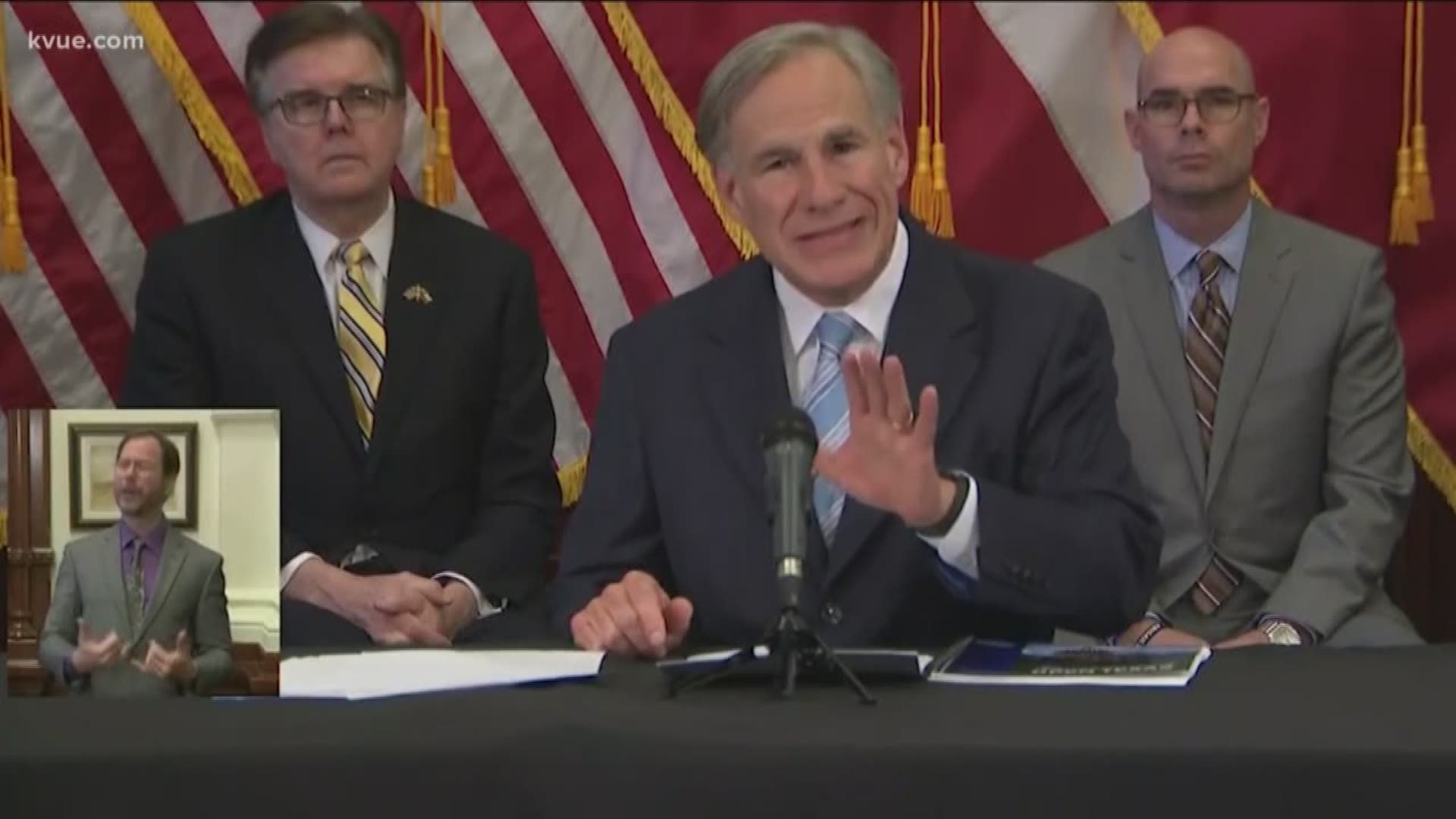 AUSTIN, Texas — For weeks, Texas stores and restaurants have had some sort of sign or note on their front doors saying they were temporarily closed as they were following orders to help prevent the spread of COVID-19.

But soon, the closed signs could soon be switched out for notices about how many people can be inside at a time.

Gov. Greg Abbott laid out the next steps at a press conference Monday, saying the stay-at-home executive order will expire on April 30 and will not be renewed as of now. Gov. Abbott also announced several types of businesses will be able to re-open on May 1.

Those businesses include retail stores, movie theaters, restaurants and malls – but there are restrictions, including the requirement to maintain only up to 25% occupancy. Museums and libraries will also be able to reopen, given they follow the 25% occupancy rules and do not reopen interactive features.

Medical professionals and politicians reacted to the governor's plan on Monday.

"I do hope that businesses take this seriously. I would very strongly monitor to ensure that they're not exceeding that 25% capacity," said Cindy Zolnierek, a registered nurse and the CEO of the Texas Nurses Association. "Just because we're seeing some limitations lifted doesn't mean that we should let up with all the things we've been told to do."

Zolnierek added that she was pleased with Gov. Abbott's gradual approach to reopen, but added that more testing, along with contact tracing, is needed.

"I think the governor is trying to balance, you know, what we're all experiencing economically and as well as mental health," Zolnierek said. "I think we have to monitor very, very closely and respond by reinstituting restrictions if we see any change in our current trajectory."

Testing, contact tracing will be even more important as new COVID-19 cases peak, decline in Texas

Dr. David Fleeger, the president of the Texas Medical Association, said using a gradual approach is the smart thing to do here, but also said social distancing has to continue happening if the plan could work.

"I think the important thing is that we're maintaining that social distancing even as we open up – that remains critical if this is gonna work," Dr. Fleeger said.

He also added that hospitals will have to deal with an increased risk of having surges, especially during the fall or spring, which he said would be common times to see respiratory disease in general.

He believes that Texas' hospitals are prepared for some sort of surge, but added testing and contact tracing has to continue as well.

“When you do the testing, and it’s positive, you need to do the contact tracing not only [to] find that individual and isolate them but we also need to find those that they were in contact with," Dr. Fleeger said.

Emergency Medicine Physician Dr. Natasha Kathuria was concerned that it would be difficult to mandate a 25% occupancy.

"We're a little bit nervous – you know, you open the floodgates a little bit and you know the flood's going to come," Kathuria said. “It is up to the public now to really take it upon themselves to please really stay strong with this social distancing."

The Texas Democratic Party held a Facebook Live event on Monday where testing was brought up.

“We’ve got to solve the health care crisis in order to get our economy moving again," U.S. Congresswoman Veronica Escobar said. "Without robust testing then we don't really know the magnitude of the problem."

RELATED: Mayor Adler 'not ready' to go to restaurants when they re-open on May 1

Mayor Steve Adler also held a Facebook Live Monday night, telling the public that everyone will just have to wait and see how it all works.

"We now know what we need to do to shut something down so that we can get to a pretty rapid flattening of the curve," Adler said.

Adler also said he is "not ready" to go to restaurants when they re-open on May 1 with restrictions.

“Today, Governor Abbott articulated a plan for reopening businesses statewide, but did not produce a plan for reducing cases of COVID-19. I agree that business should reopen, but only in a measured manner guided by science. As County Judges, we are the agents of the state tasked with executing local plans that balance the interdependent health impacts and economic impacts of Covid-19. Travis County has more knowledge of infection and how it spreads in our community than most other communities in the State. We are better prepared to set standards of care in a phased and measured opening of businesses locally. Governor Abbott has only set an expectation of calendared reopening. I look forward to working with him to set clear expectations for a measurable advance in health and economic recovery from COVID-19, whether or not it meets his calendar.”