As Austin enters Stage 4 of its risk-based level, city and county leaders announce revised orders in order to slow the spread. 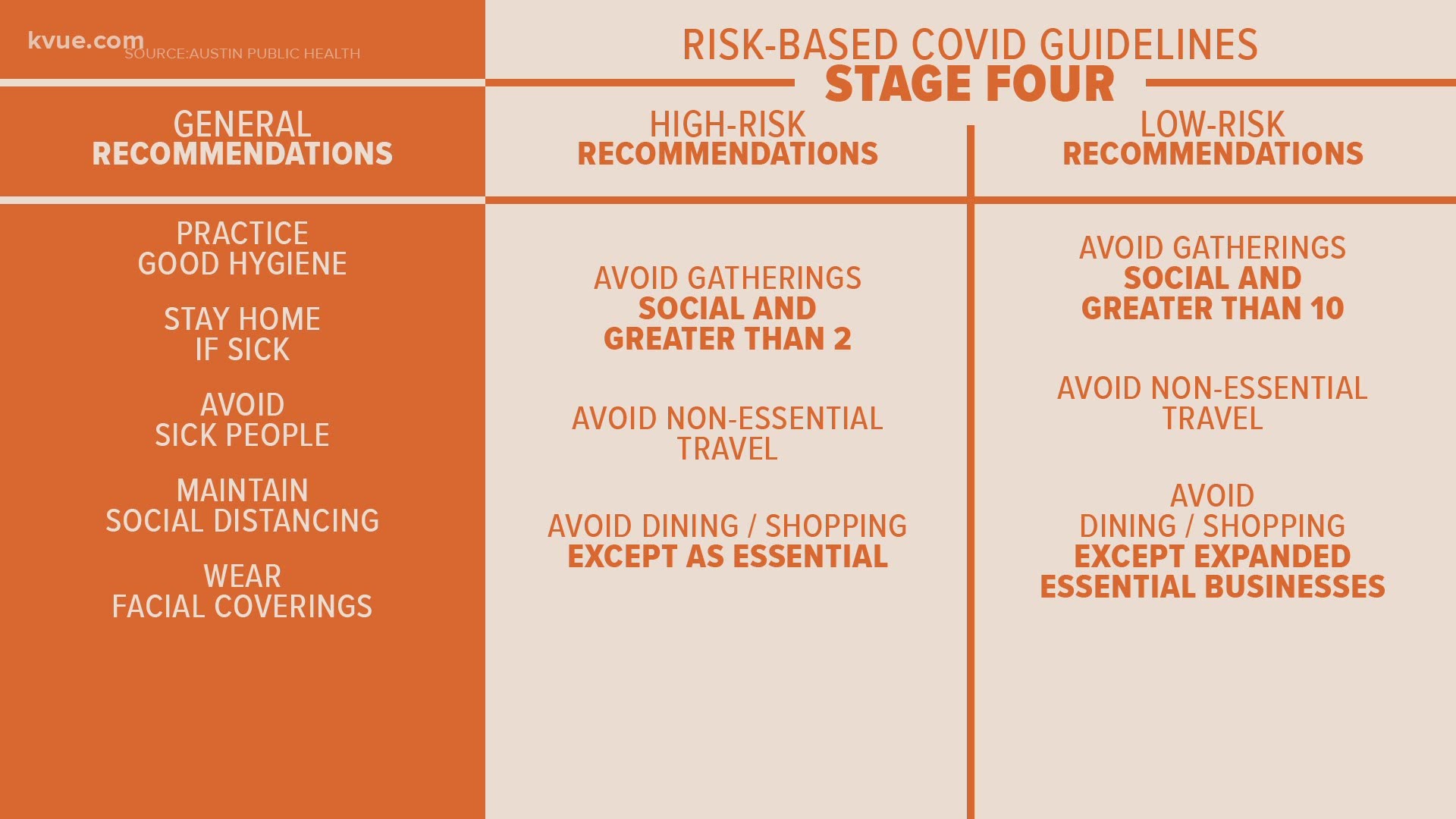 At a June 15 press conference, Austin and Travis County leaders adopted revised orders in order to slow the spread of cases and the hospitalization rate. In addition to the orders, leaders are asking citizens to continue to practice good hygiene, to practice social distancing and to wear face coverings.

Mayor Adler tweeted that the City extended the "Stay Home, Work Safe" order to Aug. 15. The current order was set to expire on June 15.

The order extension continues the provisions from the previous order, which include wearing fabric face coverings when in public, socially-distancing six feet away from others and practicing excellent hygiene by "washing your hands with soap for 20 seconds, cleaning high touch surfaces, covering sneezes, etc.

Escott said there was a 90% increase in the number of new cases from Saturday to Sunday from the previous week. He also said the doubling time transitioned from 44 days to 22.5 days on June 14. There has been a substantial increase in overall hospitalizations, ICU admissions and ventilator use in the Austin area, according to Escott.

Escott said the City is recommending that people do not attend social gatherings with more than 10 people.

Eckhardt said the governor has taken away local leader's abilities to enforce COVID-19 restrictions. However, she said she knows that the Austin-Travis County community is ready and willing to take the necessary steps to keep everyone safe and healthy.

Eckhardt said that models from the University of Texas show that if people continue social distancing and wearing masks, the number of deaths could be cut in half.

Mayor Adler said Stage 4 of the virus has come much faster than he expected. Adler said this spike is a reminder that the coronavirus is still around.

"By the individual choices that we make, and what we do over the coming few weeks, we get to decide for ourselves how important it is for us to protect those people, our neighbors, in our community," said Adler.

Adler said the choice between reopening the economy and staying safe is a false choice. He said it's possible to reopen the economy while maintaining 6-foot distancing and wearing masks.

Adler said the City is adding a provision in the orders asking those over 65 to not gather in groups more than a couple of people. The order encourages businesses able to reopen under the governor's executive orders to operate at minimal indoor capacity and to maximize social distancing as much as possible.

Attorney and Pflugerville Councilman, Rudy Matayer, said without enforcement power, the order is a challenge.

"There is no punitive aspect to not following these orders and because of that, the only thing we have to rely on, is our basic social contract with each other, meaning that we care for each other as people in general and they deserve respect," said Matayer.

City and County leaders said that's why it's important for the community to be involved in flattening the curve.

"This virus is going to be with us for a while," Adler said. "Our ability to be able to live lives as normally as we can and protect against the virus comes down to two really simple things: Just how inconvenient is it really to put on a face covering, just how hard is it really to try to maintain 6-foot distancing."

Thirty new hospital admissions were reported on June 14, bringing Austin's seven-day moving average to 20. That means that Austin is now in Stage 4 of its risk-based levels. There are five total levels.

Stage 4 recommends that Austinites do the following in order to stop the spread of the virus:

In a letter to the public over the weekend, Mayor Adler warned of the impending hospitalization surge and said the city's hospitals appear to be headed toward an "overwhelming surge in admissions."

Man, dog ejected from rollover crash on Galveston Causeway into the water below