During the recent surge of cases and hospitalizations, the City had shifted its testing focus to only patients who had COVID-19 symptoms. 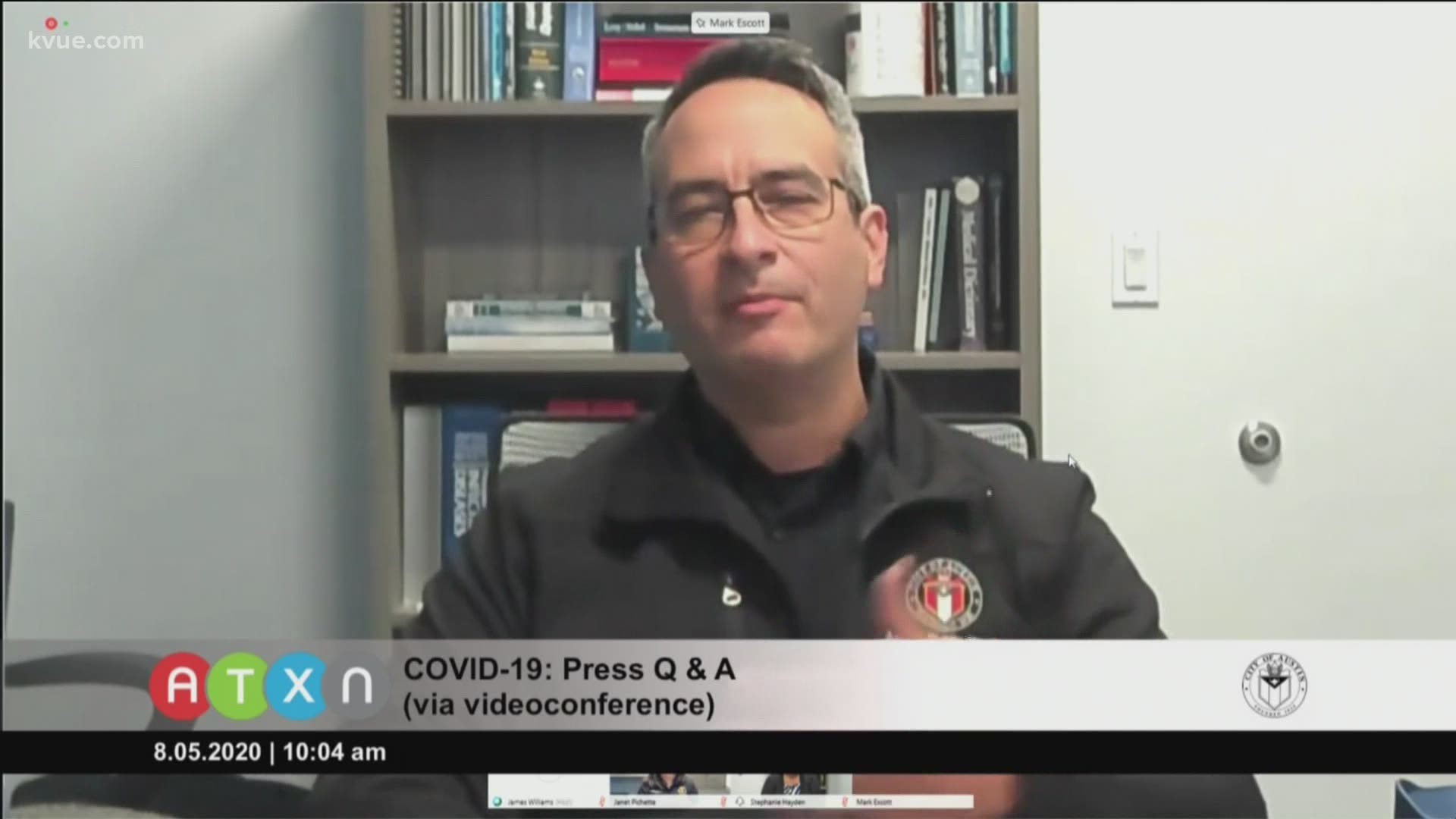 In its weekly COVID-19 media update, Austin Public Health (APH) officials said the City would revert to testing people who are not showing COVID-19 symptoms.

During the recent surge of cases and hospitalizations, the City had shifted its testing focus to only patients who exhibited coronavirus symptoms.

NEW: Austin public health officials are starting to again do some testing of people who do not have COVID-19 symptoms. During a recent surge, officials had to focus only on patients who were sick.

"We're in this for the long haul, and we need to continue to be vigilant in our protective measures," said Janet Pichette, APH's chief epidemiologist.

Escott said there was a rapid decline in cases thanks to the precautions people were taking but said the City has "hit a wall." He asked residents to go back to the mindset they had in March and April.

Escott said the City ideally needs to get to the lowest coronavirus response stage possible as children and teachers are set to return to the classroom.

"If we have a Stage Three or Stage Four, it's going to be more difficult to not only open schools but keep schools open," Escott said. "We've seen over and over again across the country and globe that when we reopen too quickly while the disease is still spreading ... that the opening is short-lived. Then closures come soon after."

Escott said he was concerned that the plateau of new cases and hospitalizations seen in the past week might be indicative of a "bounce in the short term."

Pichette added that APH was seeing clusters at work sites as people go back to work and let their guard down.

According to Escott, the Austin Convention Center field hospital remains ready to go if needed, but has yet to be staffed due to the downward trajectory of new cases and hospitalizations combined with the fact that hospital ICUs are out of surge stage.

"We will continue to watch and see if it's needed and if it is needed, we can turn on the switch and add staffing and take patients as necessary," Escott said.

As he told Travis County Commissioners on Tuesday, Escott reiterated that APH would like to see the City stay in Stage Three territory for at least two weeks before officially transitioning to a Stage Three coronavirus response. He referenced the "plateau" from the past few days again as a concerning factor regarding dropping stages.

Next question: reason for recent spike in cases and likelihood of being in phase 2 by the time schools start in-person learning.

Escott says we have to push pass the plateau, He says the key to do so is eliminating gatherings when you can aka delaying b-day celebrations, bbq's

When asked about the fluctuations of testing capacity, Hayden said APH has a testing plan and strategy. She added that the priority was to test people who have been exposed or have symptoms. However, she said APH is also not the only testing provider.

According to Escott, there is good evidence that disease transmission has been decreasing. He said it's logical that fewer people would need and want to be tested. Additionally, Escott said the City would likely see fluctuations in demand going forward and said we are in a good situation in terms of testing availability.

Escott adds there is good evidence that disease transmission has been decreasing. He says it's logical that less people would need/want to be tested. He said we'll likely see fluctuations in demand going forward and says we are in a good situation in terms of testing availability

When asked about the University of Texas' plan to proceed with 25% capacity allowed at football games, Escott said he looks forward to seeing the university's plan and remains concerned about the idea of allowing nearly 25,000 people into one place.

"I think that will be a big mistake," Escott said.

According to Escott, he expects an event with 25,000 fans to have more than 100 people who are coronavirus positive, which he said could then turn to thousands due to transmission.

He says APH has talked about the dangers of large events (SXSW, etc.). He says with 25k fans, he expects more than 100 people would be positive... which then turns to thousands. He says his concern is schools would have to close by Sept. 19th.

In his closing statements, Escott urged people to get tested if they are showing coronavirus symptoms and encouraged talking to disease experts if testing positive. He said it will take a community effort to get children safely back into the classroom.

Hayden concluded the media briefing reminding people that flu season is only seven weeks away and warned that if the community does not handle the situation correctly, it could overwhelm the hospital systems with a combination of treating coronavirus and the flu simultaneously.