After hours of trying to work around the technical issues, Austin Public Health said it had paused its scheduling system. 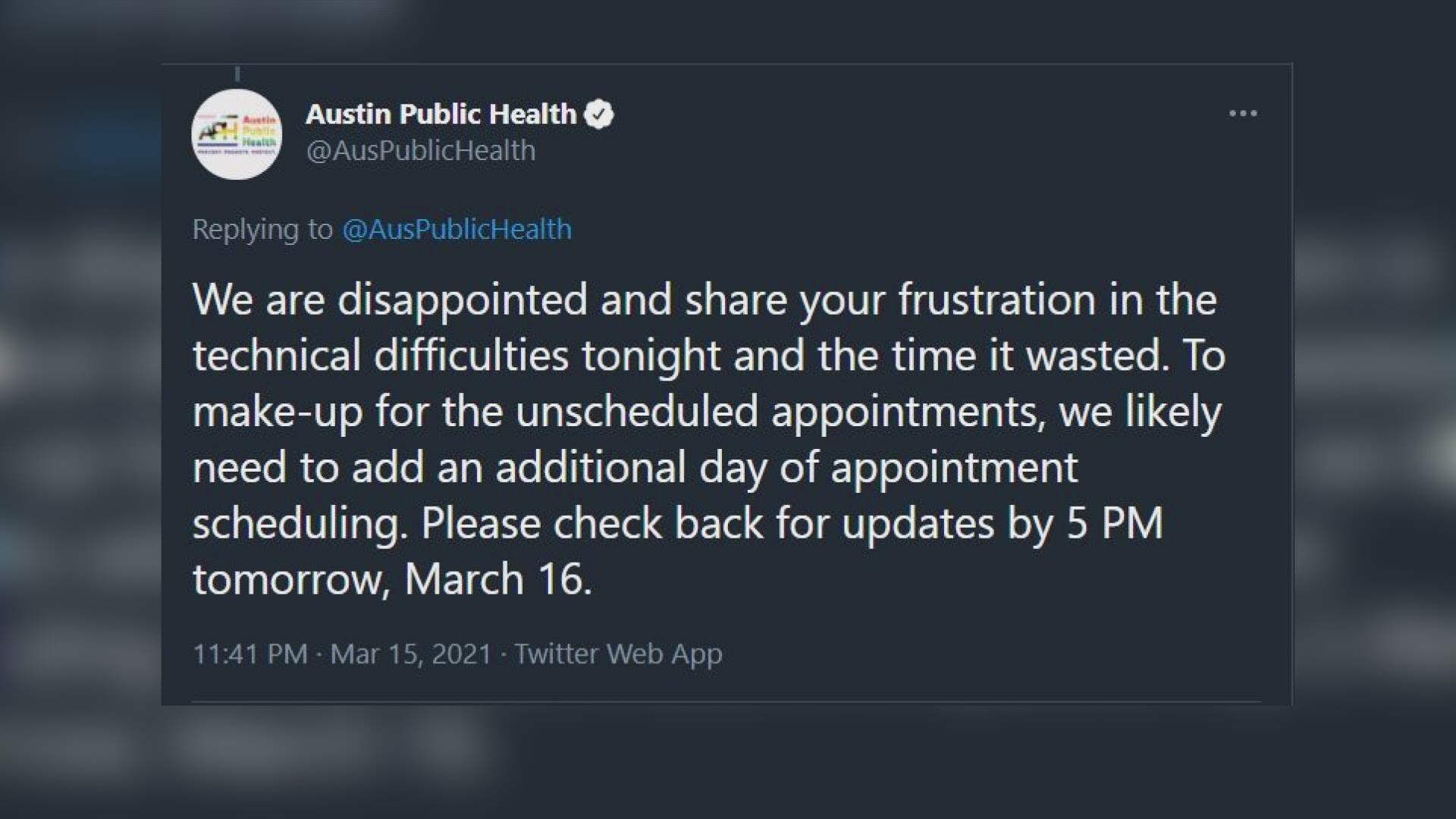 AUSTIN, Texas — The day after many reportedly waited for hours on March 15 to get through Austin Public Health's coronavirus vaccine appointment portal, the City of Austin released a statement, saying, "We remain committed to correcting the issue for future appointment releases."

The City said in a statement on March 16 that technical issues resulted in only 2,300 appointments being scheduled, and as the City works with the vendor on addressing the problem, Austin Public Health is working to proactively schedule people who made it past the waiting room "and are also continuing to schedule through the Equity Line." Unfortunately though, many were not able to get past the queue due to technical issues.

After hours of trying to work around the technical issues, Austin Public Health said it had paused its scheduling system.

"We are disappointed and share your frustration in the technical difficulties tonight and the time it wasted," APH said. "To make up for the unscheduled appointments, we likely need to add an additional day of appointment scheduling."

KVUE spoke with people who said they waited for hours to get an appointment only to learn they wouldn't be getting one.

"Frustrated, confused, angry and depressed," said Lawrence Heilman of his reaction to learning he wasn't getting a vaccine appointment.

Heilman said he's hoping to get vaccinated so he can see his grandkids again.

Jan Kemp is also trying to get a vaccine to see family. When she learned she wouldn't be getting an appointment, she said she felt "hopeless."

"I burst into tears because I kept my hopes up. I thought I was going to actually get the vaccination, and I want the vaccination. I want it so I can be with my parents," said Kemp, whose parents are both in a memory care facility with Alzheimer's and Parkinson's dementia.

Kemp said she just wants to give her parents a hug.

"We need to be with our loved ones," Kemp said, choking back tears. "I'll do anything for them, anything. That's what I'm trying to do, and I'm doing everything I can so we can all be together again."

Kemp said while frustrated, she will continue to try and get a vaccine.

KVUE spoke with Austin Public Health to get some answers for those who were frustrated with the issues Monday night:

Oak: What happens to all those folks who waited for hours? Will they have to wait again?

APH: As mentioned in the statement, any individual who made it through the queue system, we are working to get them appointments scheduled as we can see that process. However, for those that were still in the queue, unfortunately, they will have to rejoin a new queue when that opens.

Oak: What happens to all the vaccine doses that were available — are they still good?

APH: We are working to proactively schedule people who made it past the waiting room and are also continuing to schedule through the Equity Line. We will also update the public when we will open registration again. However, our vaccine doses are not prepared until the day of, so vaccines are not wasted.

Oak: After a lot of frustrations, is APH rethinking the way it goes about vaccine sign-ups?

APH: Since the implementation of the queue system, the previous releases have been fairly problem-free. However, we certainly understand the public still having difficulties accessing the vaccine, but with more than 235,000 eligible individuals registered in our system without an appointment and only receiving 12,000 first doses per week, the supply currently does not meet the demand. We hope that as vaccine manufacturing and distribution ramps up and becomes more readily available from other providers in Travis County, that anyone who wants a vaccine will be able to get one. Additionally, many other local providers, such as pharmacies, have begun to receive smaller allocations – these providers can be found at vaccinefinder.org.

At around 5 p.m. Tuesday, APH said it had identified the issue that occurred during scheduling Monday night as related to a new program code. APH is continuing to test the system to have a successful first dose appointment release on Thursday evening.

KVUE put together a list of providers in the Austin area, which you can find here.