Right now, there are 25 beds ready in the Austin Convention Center, but health officials say they can expand and treat more patients if needed. 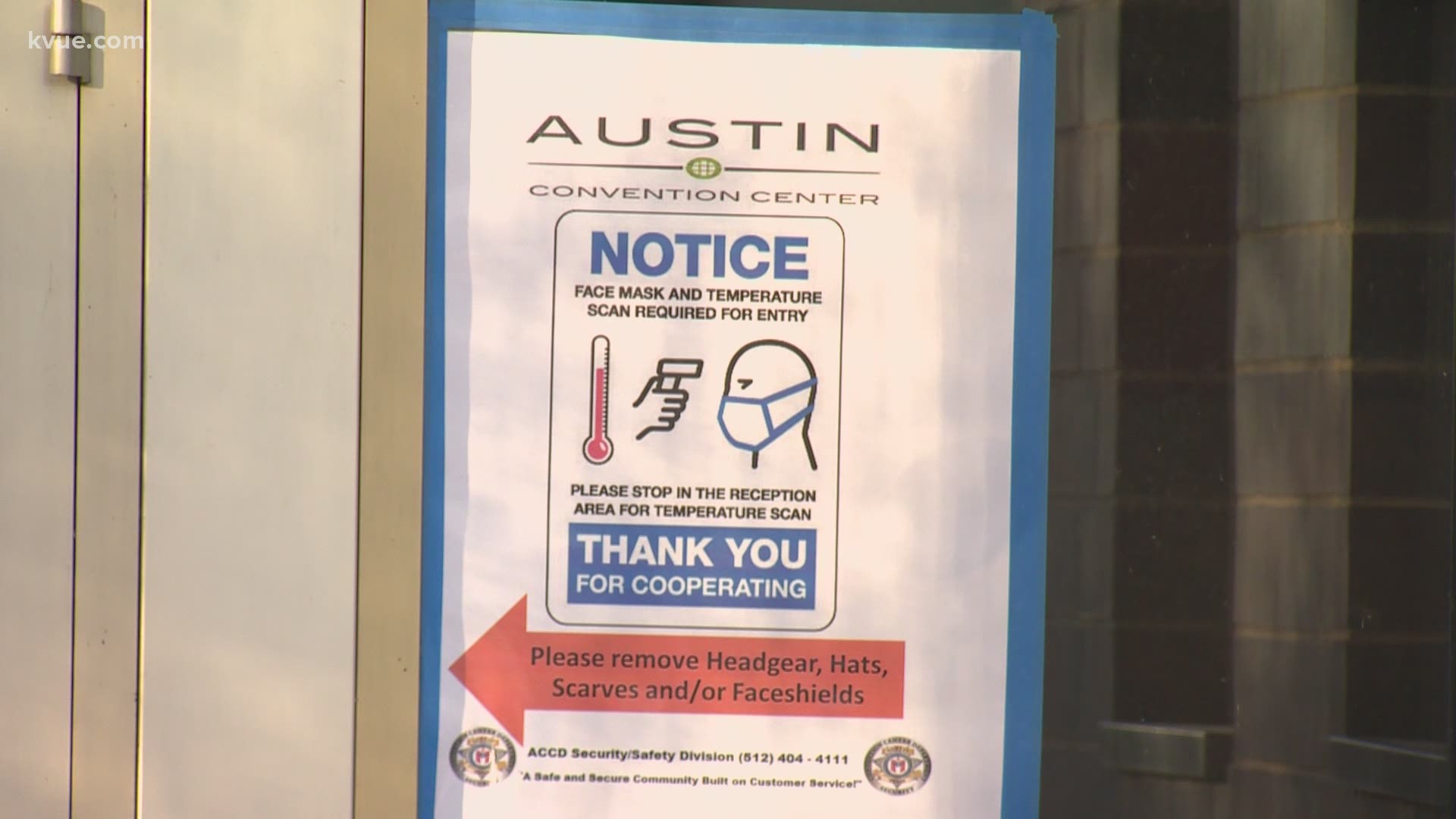 AUSTIN, Texas — On Wednesday afternoon, the alternate care site at the Austin Convention Center – commonly referred to as Austin's field hospital – accepted its first patient. And more could be getting ready to be transported, as an unspecified number of other patients' charts are being reviewed for admittance.

Right now, there are 25 beds ready in the convention center, but health officials say they can expand and treat more patients if needed.

The field hospital opening is bittersweet news for some local hospitals, as its goal is to free up some much-needed space for beds in those hospitals. But the fact that it needed to be opened at all, some doctors say, should serve as a warning.

"I mean, the convention center has opened, which is a red flag. That's a sign that things are bad," said Dr. Natasha Kathuria, an emergency room doctor in Austin. "We never want to take patients out of the hospital and put them in an alternate care site. And that's the situation here."

Credit: City of Austin
The alternate care site at the Austin Convention Center, which is prepared to treat patients for COVID-19.

How some doctors say hospitals are doing

As for hospitalizations, as of Wednesday, Travis County has 607 people hospitalized with COVID-19, with 185 in the ICU and 104 on ventilators.

While health officials say hospitals are filling up, some local doctors, like Dr. Kathuria, say they're still able to provide good care to those who need it.

"The hospitals are doing a pretty good job at managing the patients that we have. We are filling, but it's not compromising our care by any means in any of the hospitals," Dr. Kathuria said.

Dr. Kathuria has previously informed KVUE about the environments inside hospitals. As an emergency medicine physician, she works in multiple emergency rooms in Austin, giving her a wide scope of how things are going.

"And it gets exhausting. And it's been, you know, almost a full year of this for us of going in and out of rooms and having to see all this heartbreak and suffering every day. We're all exhausted. We're tired," she said Wednesday. "There is a new sense of hope, though, with the vaccine that's really given us another push of energy. And we're committed more than ever to fighting for our patients."

Still, the COVID-19 pandemic is not over, and she said that is evident in the hospitals.

"So, you know, there's a lot of stress. It, it's sad. There's so much suffering in the hospitals right now. It's really unimaginable," Dr. Kathuria said. "There are so many parents and grandparents that we're losing every day to this virus. And it's, it's heartbreaking. And to be a clinician and see it and then leave the hospital and see people not really caring about the virus, it's, it's heartbreaking. It's very difficult. It's devastating to all of us."

As for the convention center, Dr. Kathuria hopes it will help ease the stress on some hospitals.

"I mean, you open one – just one bed, two beds, five beds, the convention center has the potential of opening so many more beds for our city that are so necessary. Otherwise, the problem is backlogs into the ER and we end up having to hold these patients in the emergency department. And we don't want that. It becomes a burden if we can't isolate patients," she said.

"There's a physical number of beds that you have in the hospital. But the limitation in most situations isn't beds. It's staff. That [bed] is of no use If you don't have a nurse, you don't have a respiratory therapist. Those are the backbone of the hospital, are the people that take care of these patients. And that's the real issue is having enough of those people," Dr. Weingarten told KVUE Wednesday. "So we definitely are, as all hospitals in the area [are], you know, feeling a little bit of a crunch in terms of the numbers of patients we have. We're still able to provide good care, I think, to our patients. But at some point, these are finite resources. We've got a limited number of beds and a limited number of people. And if the numbers keep going up, we will have issues everywhere."

He added, however, that health care providers getting doses of the vaccine has played a role as a sort of boost of energy for doctors.

"Well, I think everybody's a lot happier than they were during the first surge [now] that we have vaccinated our frontline workers. So, the nurses, the physicians, respiratory therapists, the, you know, everybody who works in the ICU, the people who do maintenance, everybody has had [the] opportunity to be vaccinated. And I think that's a huge psychological benefit there," he said. "You know, we're still working hard, people working extra shifts at some point. You can only do that for so long. But we haven't reached the breaking point by any means yet."

Overall, Dr. Kathuria said while there is light at the end of the tunnel, cases are still rising and she warned that Austinites shouldn't let their guards down.

"This is our last few miles of this marathon, Austin, we are in this and we're in this together. We are rolling out vaccines as fast as we can. We're working to get antibody infusions available for as many patients as we can. We're doing our part and we're fighting so hard. Please stay safe, stay home, wear masks and just do your best to protect those around you," she said.

"We have a small percentage of the population that's been vaccinated, so we need to continue doing what we should have been doing all along, which is, you know, being careful with who you associate with, social distancing, wear a mask, wash hands – do the right thing there," Dr. Weingarten said. "Even after the vaccine starts to roll out, it's gonna be a while before we have everybody adequately vaccinated who wants to be vaccinated. So, I think we've got several more months of this, unfortunately. But there is a light at the end of the tunnel."

Dr. Weingarten also said it's important for people to know they will still be treated at local hospitals if they require care.

"One of the messages I want to give people is that as busy as things are, we still can take care of sick people in the hospital. We don't want people staying home with their heart attacks and strokes," he said. "This happened during the first surge and patients died because people stayed home with things that they should have come to the hospital for because they were afraid."