Austin Public Health also touched on how the winter storm could impact case numbers in the area. 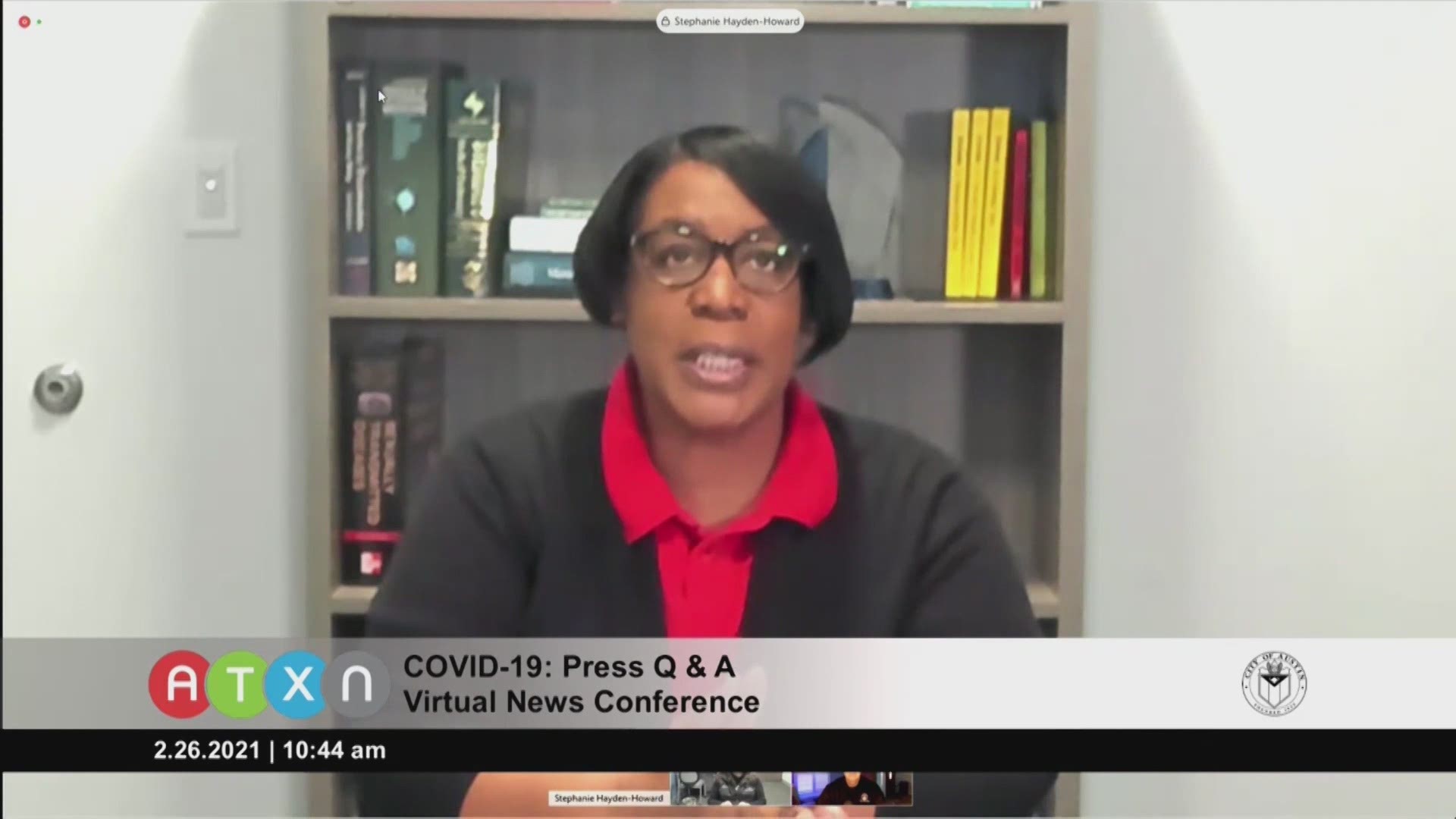 KVUE broke down some of the key points APH touched on.

Early in the Q&A, APH Chief Epidemiologist Janet Pichette noted that during the weather emergency last week, many Austinites were forced to shelter either with family and friends outside their households or with strangers in warming centers and other shelters around town.

Pichette encouraged anyone who found themselves in that situation who is unsure whether they may have been exposed to COVID-19 to quarantine themselves. She also said if you develop symptoms, she strongly encourages you to get tested.

Pichette also said at this time, it's unclear whether those close-quarters situations will lead to an uptick in cases in the Austin area. She said APH is still playing catch-up.

"We most likely would anticipate seeing upticks over the next week and so, we're going to be looking very closely at that," she said.

Dr. Jason Pickett, Austin-Travis County's alternate health authority, agreed that it's unclear at this time, noting that while some people were forced to shelter with others outside their households, many were unable to move about due to bad road conditions, limiting their time spent around strangers.

"We don't yet know how this weather emergency has impacted infection throughout the community," he said, adding, "We don't know if [the impacts of the storms] means we're going to go up, go down or stay the same."

APH Director Stephanie Hayden-Howard said the agency is stepping up vaccination efforts to the best of its ability. She said this week alone, APH has provided over 20,000 vaccines as of Friday.

Hayden-Howard said APH has continued to see volunteers signing up to help and it is continuing to train staff as well. She is also very optimistic that the vaccines will soon be available in more places, like pharmacies, to provide residents with more options for where they can get a shot.

Pickett echoed much of what Hayden-Howard said, but also noted that, "As it stands, we give the vaccine that we receive."

"We give every bit of it and we have not wasted a single dose of vaccine that has been allocated to us by the state. So as we prove that capability and continue to show that, then I think our vaccine allocations will continue in large quantities and allow us to do that," Pickett said.

The KVUE Defenders found Pickett's claim about APH not wasting any vaccines to be false. As of Friday, Feb. 19, APH has wasted 65 doses of the vaccine, according to Texas Department of State Health Services data.

A spokesperson for Austin Public Health sent KVUE the following statement in response to that finding:

"We have not had any vaccine loss as a results of storage or handling issues. The only vaccine waste, as noted by the data from the Texas Department of State Health Services, has been a result of mechanical issues in the syringe or other reasons such as a broken seal for a vial that essentially makes the vaccine unusable and cannot be administered into a patient. Even with such mechanical errors, this has impacted less than a tenth of a percent of our vaccine. With any vaccine that is administered there will always be minimal vaccine waste as a result of similar mechanical issues. Additionally, we have not had any instances of vaccine doses being thrown out toward the end of clinic operations - once a vial is opened, all doses are administered into willing arms. Austin Public Health has been incredibly successful in managing and administering all vaccine that is usable, and our staff and volunteers are properly trained in order to avoid vaccine loss as a result of storage or handling issues." 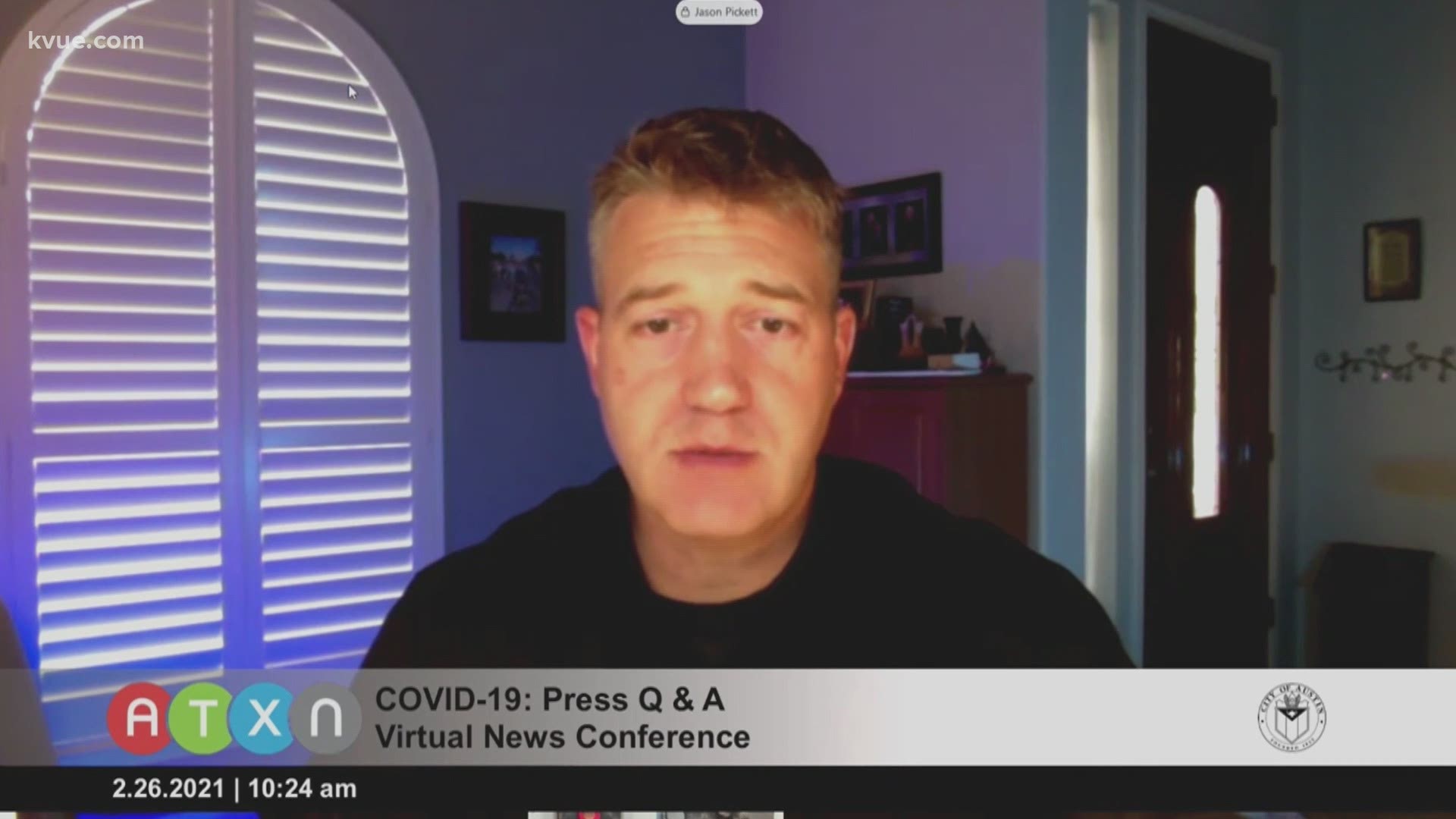 A hot topic in Austin this week has been a drive-thru mass vaccination site set to open at the Circuit of the Americas (COTA) on Saturday, Feb. 26. Travis, Caldwell, Hays and Bastrop counties will be working to give out 3,000 doses of the vaccine.

Travis County authorities said earlier this week that the distribution is by appointment-only and is open only to people in Category 1B. But many who reached out to KVUE were confused about how to sign up to take part in the distribution.

In the Q&A, Hayden-Howard provided clarification, saying the event is a "closed POD," or point of distribution, for CommUnityCare clients living in the counties involved in the effort. She said the plan is to do more of these types of distributions in the future.

“In order to be eligible for this drive-thru vaccine clinic, you must be classified in the Phase 1A and Phase 1B groups, as determined by the Texas Department of State Health Services, and be a patient of CommUnity Care Health Centers or identified by one the respective participating counties,” said Travis County's Hector Nieto.

As for when a mass distribution site of this nature might be open to people beyond groups 1A and 1B, Pickett said the area still has "a ways to go" in vaccinating the people in those groups first. Pichette also noted that it's up to the State to let APH know when it can start distributing vaccines to people in the 1C group.

Are we ready to stop wearing masks?

Another hot topic on Friday was masking. On Thursday, Gov. Greg Abbott said Texas is looking at when it will be able to lift all statewide orders related to the COVID-19 pandemic – including the mask mandate.

However, Pickett said now isn't the time for Texans to remove their masks.

Pickett said that with previous diseases like smallpox, measles and polio, herd immunity was never achieved through natural infection.

"All of these required widespread vaccination efforts to really halt those diseases and to protect the population at large," he said. "COVID-19 is no different."

Brown grass and dead plants: Here's what will come back and what won't after last week's freeze