COVID-19 cases and hospitalizations are on the rise in the Austin area and Texas as a whole. 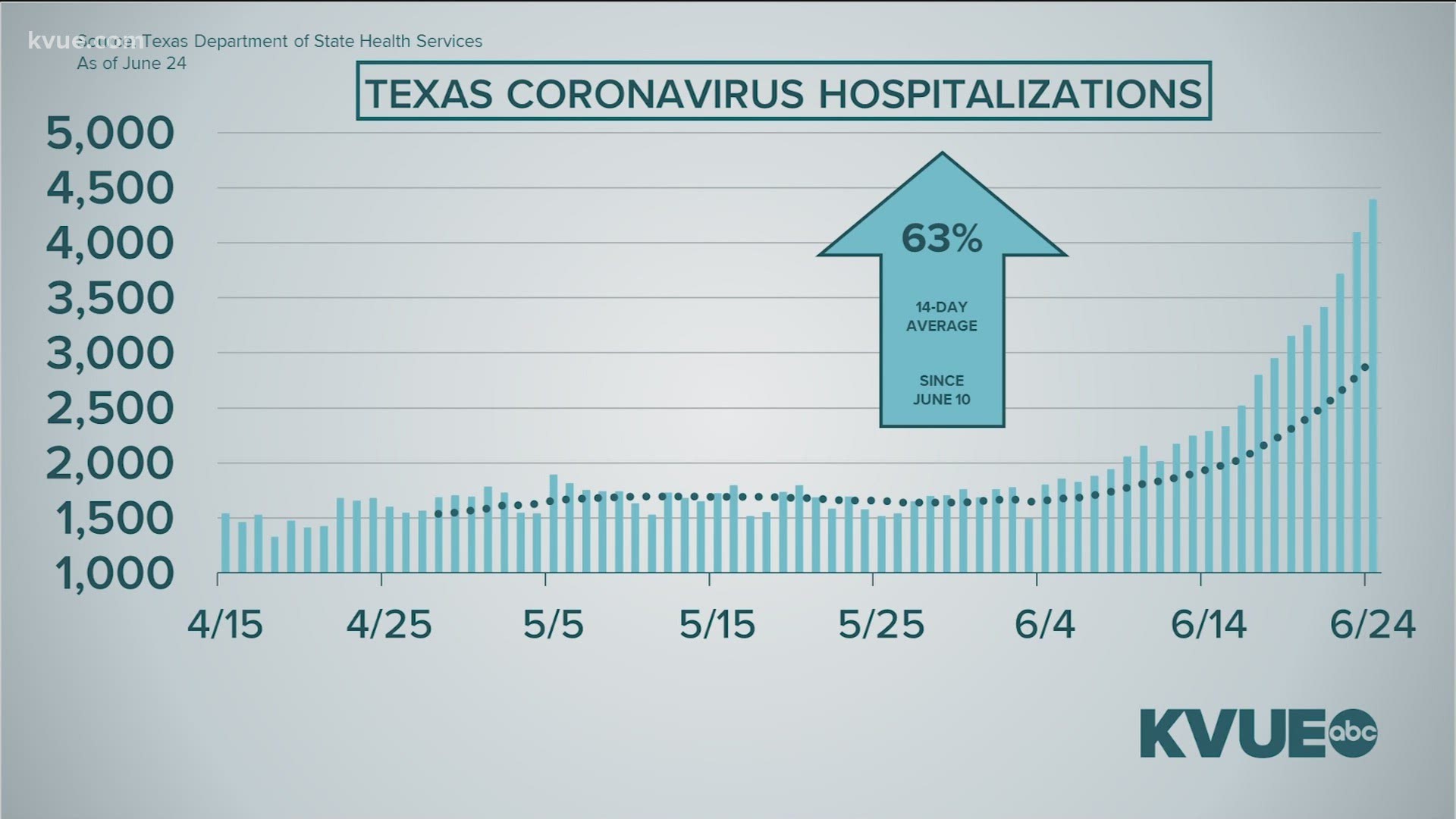 AUSTIN, Texas — As COVID-19 cases and hospitalizations in Austin-Travis County and Texas as a whole rise, Austin Public Health (APH) said local hospitals could reach capacity by mid-July at the current pace of coronavirus growth.

Austin's interim health authority said based on projections right now, we could have 13,000 COVID-19 cases in the next 18 days, doubling from the current estimated 6,600 as of June 24.

"Unlike hurricanes, we have the ability to change this storm, to downgrade this storm," said Dr. Mark Escott. "But folks need to understand what we're talking about and the magnitude of impact of this storm could have."

He said "the lid is off" on COVID-19 spread in Central Texas. He is recommending the mayor and city manager increase enforcement on entities not following social distancing and sanitation guidelines. Escott said he is particularly concerned about bars.

"It's hard to drink and socialize with a mask on in a bar," he said. "So that is probably one of the most concerning things that we have open right now. Certainly my advice to to the public is don't go to the bar. Now is not the time. I wish it was the time. I'd love to be in one myself, but now is not the time. We've got to be very, very careful."

Over the past weekend, the TABC temporarily suspended the alcohol licenses at four Austin bars for not following social distancing rules.

Dr. Escott said he stands ready to take enforcement action against businesses that are not requiring staff and customers to wear masks. Residents are urged to call 311 to report violations.

Texas has seen record hospitalizations for COVID-19 patients over the last 13 days, with the total increasing 63% in nearly two weeks. More than 4,380 Texans were in the hospital with the virus on June 24.

The state has set up a disaster volunteer registry where you can sign up to help with the state's public health and medical preparedness response.

Austin-Travis County is also reporting an increase, with 56 new hospitalizations on June 24. The seven-day average increased to 43.4, despite local leaders warning an average of 20 new admissions in seven days was a number they didn't want to exceed.

"The thousands of physicians and nurses and other health care workers in the Austin area will be there to care for you if you get sick. But to do that, we need the staff. We need the resources. We need the hospital beds," said Dr. John Abikhaled, president of the Travis County Medical Society.

As of June 24, the health care providers reported the area has:

Another concern is front line healthcare workers contracting the virus while seeing more patients, which could impact the number of staffed beds if people don't change their behaviors.

"We have to have nurses to take care of the patients in the bed," said Serena Bumpus, director of practice for the Texas Nurses Association. "That will compromise our hospital's ability to to maintain their capacity and therefore put us at a critical situation with staffing."

During a press conference on Wednesday, local health leaders said Central Texans need to stay home, except for essential activities.

"We're going to see hospital capacity," said Dr. Escott. "This is why we're asking everyone to take action now to act as if a shelter-in-place order were existing today. As the governor said earlier this week, if you don't need to go out, don't go out."

As numbers increase and people are frequenting reopened businesses, public health officials are struggling to keep up with contact tracing.

"They've been at grocery stores and restaurants and bars and friends' houses – they've had contact with hundreds of people," Dr. Escott said. "Contact tracing in that circumstance is not going to be as effective. So that's why we're asking people not to depend on contact tracing at this stage of the outbreak. We need their support. We need their engagement. We need them to join in on this mission."

Texas hit a record on June 23 as the state saw more than 5,400 new coronavirus cases in a single day. The 14-day average in the state is up 101% over the past two weeks, which means new cases have doubled during that time.

'It's going to take all of us' | Wearing masks essential to reopening Austin's economy, Mayor Adler says

Dr. Kirsten Nieto said she was concerned about the changing demographics of the infected population.

"Many of the early cases that we saw were in vulnerable populations because people could not choose to isolate," she said. "The new cases that we're seeing in our communities are because people are actively choosing to congregate and to not isolate or mask."

Over 70% of new COVID-19 cases since June 8 have been in the 20-39 age group. The same group is experiencing increases in hospitalizations.