Airport officials said fewer than 1,000 people flew out of Austin's airport on April 1. 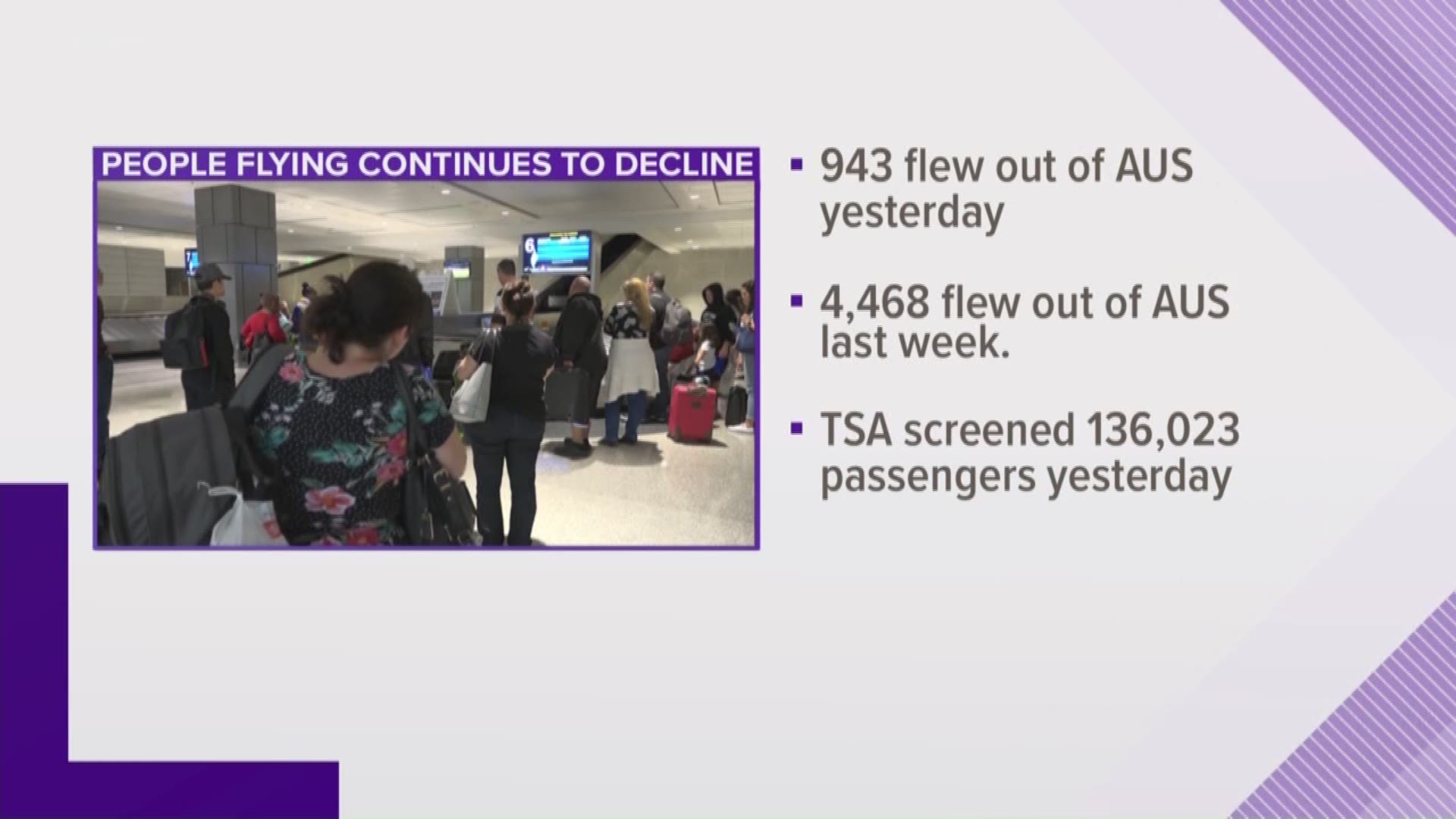 AUSTIN, Texas — Air travel is taking a hit as coronavirus spreads across the country.

Due to this declining number of travelers, the TSA announced it will temporarily close Security Checkpoint 1 at the Austin airport beginning March 31 and will continue to monitor passenger levels to determine when it will be reopened. All passengers will be screened through Checkpoint 2 until further notice.

Thousands fewer people are flying out of Austin compared to the same time last year, according to numbers released by Austin-Bergstrom International Airport (AUS) on March 24.

Passenger traffic dropped dramatically as national and local guidance has been placed to help prevent the spread of the coronavirus.

KVUE reported the airport was reportedly expecting 9,998 passengers on March 17, but TSA ended up screening only 6,780 flyers.

For context, the airport usually sees an influx of travelers for South By Southwest (SXSW) during this time of year. The festival, which was set to run throughout last week, was canceled on March 6.

Last year on March 17, when SXSW ended, a total of 28,870 people flew out of AUS. When compared to the actual number of travelers on the same day this year, passenger traffic was down about 76%.

As of April 3, no international flights will be coming in or out of the airport throughout April. The airport has closed Gates 1-4 and 6, which is where those planes normally park. This is so cleaning crews can focus efforts on other parts of the airport.

But still, coronavirus hasn't stopped everyone from traveling.

Texas Tech University women's tennis player Margarita Skirabina was at the airport trying to get home to Russia on March 18, after the university canceled classes for the rest of the semester.

"It was kind of hard to make the decision to go home," Skirabina said. "Life has stopped and I don't know what to do."

The Bearden family from San Marcos was returning home from a Florida beach vacation cut short.

"Once we learned how rapidly this thing is happening and that they might shut down travel, we were like, 'We got to go,'" Sabrina Bearden said. "It made everything a lot – what was supposed to be relaxing, a lot more stressful."

For Leslie Brooks, traveling home to Ohio, fewer flyers at Austin-Bergstrom was a welcome surprise.

"I'm grateful to see so little people," Brooks said. "I don't want to be fearful; I want to live life as it is."

Despite Austin Mayor Steve Adler's March 17 announcement that all restaurants must begin closing their dining rooms and that the City would restrict gatherings of more than 10 people, the airport remains open because it's considered critical infrastructure.

Crews are working around the clock to make sure everything is sanitary.

The airport released the following statement:

"Like other airports, AUS is currently experiencing a significant decrease in passenger volumes and we understand concerns surrounding travel at this time. We ask our passengers to utilize their best judgment when making decisions about whether or not to travel. Should they choose to, AUS is open, safe and operating normally. The AUS team is working around the clock to ensure enhanced cleaning operations and continuity of our services for everyone who needs to access the airport.

For information regarding changes to air service, passengers are encouraged to contact their airlines. General information can be found here.

For the latest on COVID-19 related news at AUS, visit this page."

As of March 24 at 7 p.m., 98 people have tested positive for coronavirus in Austin-Travis County.