Other Texas business may expand to 75% capacity, the governor said. 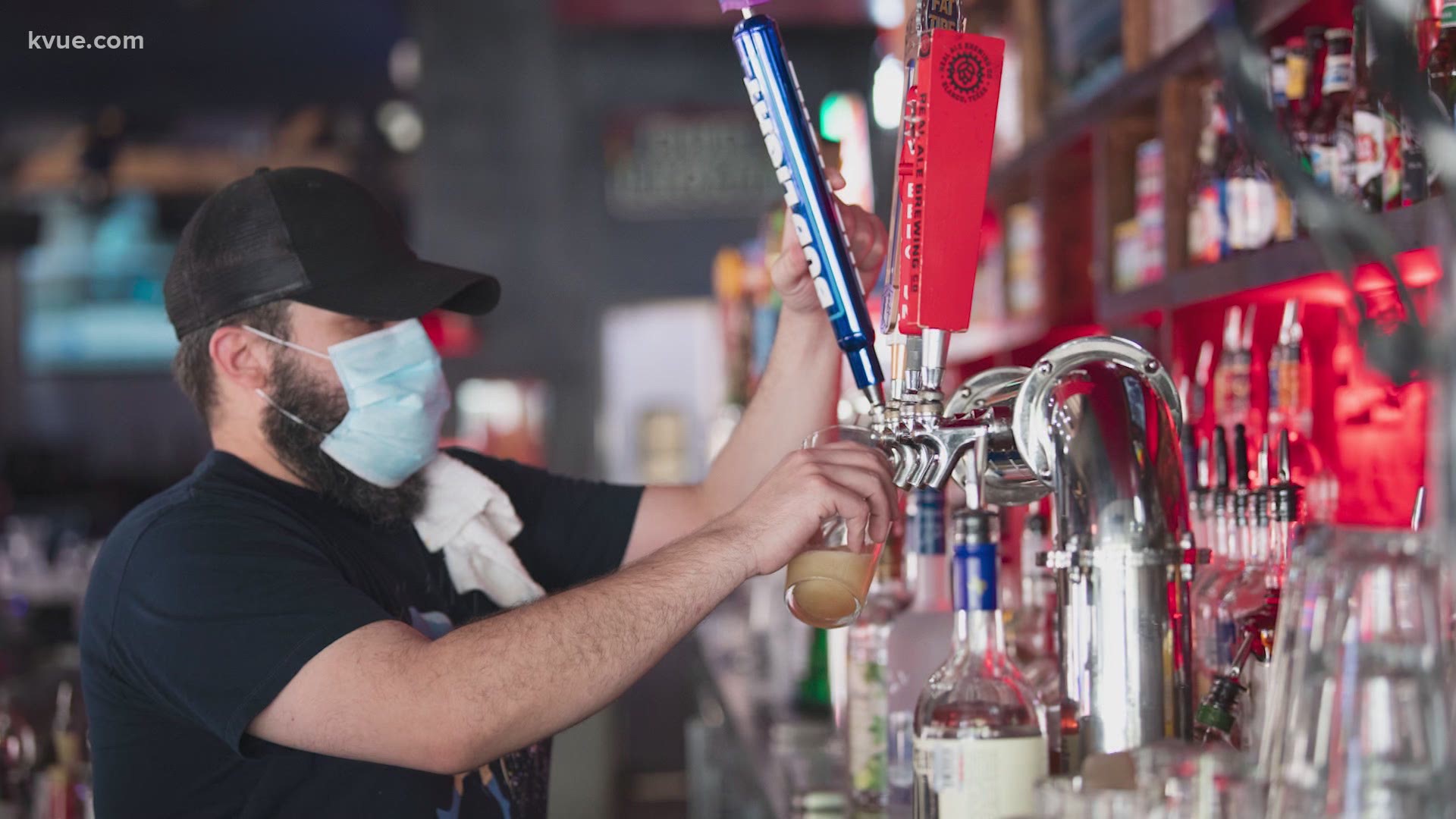 AUSTIN, Texas — In an announcement on social media Wednesday afternoon, Gov. Greg Abbott said bars in Texas can open at 50% capacity starting on Oct. 14, if the county judge of each county opts in with the Texas Alcoholic Beverage Commission (TABC).

According to guidelines added to the Strike Force to Open Texas page, bars in counties that have opted in must make sure all customers are seated while eating or drinking and groups are spaced at least 6 feet apart. Tables of more than six people are not allowed.

All customers and employees must wear a face covering over their nose and mouth when social distancing is not possible.

County judges who opt into the openings must assist in enforcing the safety protocols, Abbott said.

RELATED: List: Central Texas counties opting in and out of reopening bars

“Travis County Judge Sam Biscoe intends to take the next several days to speak with the County Attorney’s office and determine what authority has finally been returned to local governments based on Gov. Abbott’s announcement. Additionally, he will continue to confer with the Austin-Travis County Health Authority to chart out the County's safest route to ensuring a healthy population and economy."

Meanwhile, Williamson County Judge Bill Gravell said he plans to be the first county judge in Texas to opt in.

"It is time for all of our businesses to be open to serve our public while following the governor’s health protocols to be safe," he said. "Our county residents have shown that they can be smart and protect themselves and others, so I will be choosing for Williamson County to opt in on Oct. 14. This is another step forward for us as a community, and we can do this safely and wisely."

RELATED: Austin bars apply to reopen as restaurants; 6th Street business starts to pick back up

As some bars have been able to reopen as restaurants, the TABC said they’d continue to operate as a restaurant after Oct. 14.

"We’re working on a process for businesses that want to revert back to operate solely as a bar," a TABC spokesperson said. "Ultimately, the indoor capacity is going to depend on whether they choose to continue to operate as a restaurant, or if they wish to revert to purely bar status."

Abbott also announced businesses like amusement parks, movie theaters, zoos, aquariums and bowling alleys can expand to 75% capacity in counties with low COVID-19 hospitalizations – where COVID-19-related hospitalizations are less than 15% of hospital capacity.

"Our state is prepared for these additional openings, but we all must remain vigilant and show personal responsibility to protect ourselves and our loved ones," Abbott said.

On Monday, the governor teased the reopenings in a tweet featuring an animated GIF of two beer glasses.

Texans have continued to keep COVID under control.

The hospitalizations, number of new positive cases, and positivity rate remain contained. Today was one of the lowest for fatalities in a long time.

I will be announcing more openings soon.

“Texans have continued to keep COVID under control,” Abbott said on Monday. “The hospitalizations, number of new positive cases and positivity rate remain contained. Today was one of the lowest for fatalities in a long time.”

The governor most recently allowed restaurants in the state to expand to 75% capacity, though bars remained closed following a spike in cases this summer.

On Monday, the Texas Bar & Nightclub Alliance (TBNA) responded to Abbott's tweet, saying it has been "putting growing pressure on the governor since August" and anticipating him "to take action in reopening bars safely and fairly."

Texans have shown that we can contain the spread of #COVID19 by following health protocols & guidelines.

Our state is prepared for these additional openings, but we all must remain vigilant & show personal responsibility to protect ourselves and our loved ones.

But on Wednesday, TBNA President Michael Klein released another statement.

"We are extremely shocked by the announcement made today. When other governors around the country, like Ron DeSantis, continue to lead and set a course for economic and social recovery for their states, today our governor punted," said Klein. "TBNA is under no delusions: many of our members will eventually be allowed to operate under this new order because their county judge will lead and 'opt in.' However, this is a death sentence for so many of our members under the jurisdiction of county judges who still believe that we should be locked down like we were in March and April, despite all the progress we've made coexisting with this virus."

Bars had been ordered to close since late June after Abbott announced they could reopen on May 18 and cases skyrocketed. Between Abbott's announcements on May 18 and on June 26, those three metrics he referenced in his Monday tweet – hospitalizations, new positive cases and the positivity rate – each rose significantly.

GRAPHS: COVID-19 stats since Texas bars reopened in May

The numbers show that the metrics Abbott referenced in his Monday tweet were in a worse spot than when he had originally reopened bars in May. Hospitalizations and the seven-day average of daily new cases were nearly twice as high and the positivity rate was approximately 0.26% higher.

On Wednesday, Abbott said he believes this reopening will be more successful than last time because Texans are more aware of the nature of the virus. Abbott also said he believes the state's increased testing capacity will help detect and contain further surges.

Appeals court: President Trump must turn over taxes to prosecutor