Protesters hanging from Fred Hartman Bridge arrested after firefighters rapel down, lower them to boats 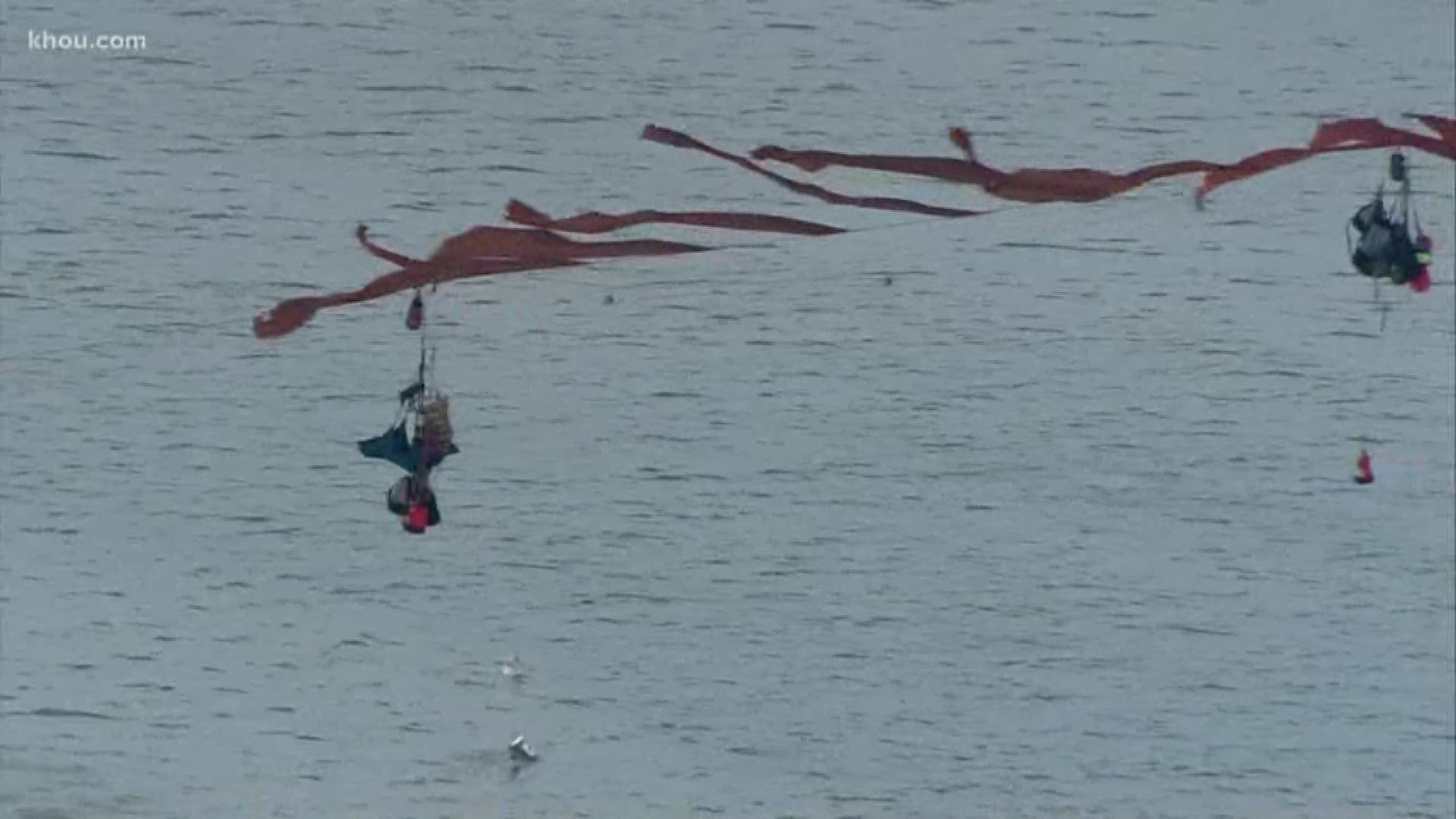 HOUSTON — All of the 11 protesters dangling below the Fred Hartman Bridge near Houston are in custody.

Houston and Baytown firefighters rappelled down to the protesters and lowered them to boats waiting below.

The protesters were then taken ashore in handcuffs, accompanied by a Harris County Sheriff's deputy.

Some had been hanging from the bridge for nearly 12 hours.

Deputies arrested 12 other protesters on the bridge just after 5 p.m. Thursday, the Sheriff's Office tweeted. A Sheriff's Office representative said they were acting as spotters for the 11 people dangling below.

The Harris County Sheriff's Office said they will face multiple charges including obstructing the roadway and obstructing the waterway. The sheriff's office is checking with the U.S. Attorney General on other possible charges.

The activists could also face charges for a three-vehicle crash on the bridge after a van carrying the protesters partially blocked a lane, according to Precinct 8. One person was hurt.

The Houston Ship Channel reopened around 5 a.m. Friday according to the U.S. Coast Guard.

PREVIOUSLY: Greenpeace activists are hanging from the Fred Hartman Bridge in an effort to block traffic in the Houston Ship Channel. They originally said they would stay for 24 hours.

There are 11 activists suspended from ropes below the bridge, just east of Houston. They're attached to brightly-colored flags to help draw attention. The protesters have spotters on the bridge coordinating with them.

Sheriff Ed Gonzalez said earlier they would not attempt to force a rescue or removal of the activists unless they become a safety or health hazard. Deputies said they didn't want to risk the lives or rescuers or the activists.

“Our goal is just to resolve it safely,” Gonzalez said. “We are concerned for everyone’s safety.”

Gonzalez said they're not only concerned about broader public safety. They're worried about the protesters well-being, especially with a lack of water in this "brutal heat."

The bridge is suspended 180 feet above the water, which means the protesters are at least 100 feet in the air. Here is raw video from the ground and Air 11.

He admitted it's a complex situation but said they "have it under control, as best we can, at this point."

Traffic was reduced to just two lanes as of 2:30 p.m. Dozens of law enforcement officers and experts from local, state and federal agencies are lined up in the bridge's right two lanes to monitor the protest.

The portion where the protesters are, between Baytown and La Porte, is one of only two major routes over the ship channel for vehicular traffic.

Gonzalez suggested drivers avoid the Fred Hartman Bridge by taking 146 North to 225 to the Beltway.

Drivers can also use I-10 East or the Lynchburg Ferry to get around the delays, which are expected to increase heading into Thursday afternoon rush hour. The officials at the ferry said they will be using two boats to handle the additional traffic.

A portion of the water traffic in the ship channel has stopped from Light 102A to 104 due to the demonstration.

The activists tweeted they are hanging from the bridge to shut down "the largest oil export channel in the country to resist Trump..."

The Houston Ship Channel is responsible for supplying nearly 40-percent of petrochemical product to the nation.

It remains the busiest shipping channel in the U.S. with more annual ship movements than Los Angeles, Long Beach, and New York/New Jersey combined, according to the U.S. Dept. of Transportation.

Credit: AIR 11
Eleven Greenpeace protesters dangled from the Fred Hartman Bridge, east of Houston, on the same day as the Democratic Presidential Debate at TSU.

According to the American Society of Civil Engineers, the Houston Ship Channel stretches from the Gulf of Mexico through Galveston Bay and up the Jacinto River, ending four miles east of downtown Houston. The ship channel serves the second-largest petrochemical complex in the world, according to ASCE.