Adam Alsahli expressed support for extremist groups in online posts, according to the FBI.

CORPUS CHRISTI, Texas — Update May 26: FBI CONFIRMS THERE IS NO SECOND PERSON OF INTEREST IN THIS CASE.

HERE IS WHAT THE RELEASE SAYS:

"The shooting that occurred last Thursday at the Naval Air Station Corpus Christi remains an active investigation. While there was initial concern about a potential second person of interest, intense investigation leads us now to believe there was not. At this time, there is no imminent threat to the public safety of the Corpus Christi community.

So far, all evidence points to the shooting being a terror-related incident, and we are investigating it as such. Protecting the United States from terrorists remains a top priority for the FBI. However, we are committed to remaining agile in our approach to this investigation to ensure a thorough and definitive investigation of this shooting is completed.

The suspect, Adam Salim Alsahli, 20, died at the scene. He was born in Syria and was a US citizen.

The heroic actions of the Master-at-Arms Petty Officer 2nd Class who risked her life and did not hesitate to engage the subject, as well as the actions of the Navy Security Forces, likely stopped what could have been a much more deadly attack.

The FBI appreciates all the agents, support employees, and law enforcement partners who continue working countless hours to investigate this case. We also thank all the members of the community who have been calling the FBI Tip line to provide us with additional information."

Update May 25: FBI agents and others are investigating the shooting as an act of terrorism. The FBI is still searching for a second person of interest.

Last Thursday, just after six in the morning when investigators say Al-Shali drove up to the north gate, pulled out a handgun and opened fire at a Navy Guard.
Fortunately, that guard was wearing a bullet resistant vest and it wound up saving her life. She was able to activate the security barriers preventing the shooter from getting onto the base. Then she and other security guards opened fire, killing Al-Shali.

FBI agents and others are now investigating the shooting as an act of terrorism after finding social media posts from Al-Shali expressing support for extremist groups like Al-Qaida.

“Do a full vertical full background, criminal background and social background on the deceased subject to see who his friends, associates are or what kind of social media activity there is and other resources that they can draw up on to get a sense of who this person is, what his motivation was.” Said former Special Agent Byron Sage.

The FBI is still searching for a second person of interest who may have more information on a motive for last week's shooting. Operations at NASCC returned to normal by Friday afternoon.

Update; Saturday, May 23, 2020 9:30 a.m. More on background and possible motives of shooter killed in attack

Adam Alsahli, who was identified as the shooter in an incident early Thursday at the north gate of NASCC, was a student at Del Mar College east campus from the fall of 2018 to the fall of 2019 according to a statement from the college obtained by 3News this weekend.

"Del Mar College confirms that Adam Salim Alsahli was a Business Administration major and attended the community college located in Corpus Christi, Texas. He was enrolled during the following semesters: Fall 2018, Spring 2019 and Fall 2019."

The suspect killed during what the FBI is calling a “terrorism-related” attack at NASCC voiced support for hardline clerics, according to a group that monitors online activity of jihadists.

The FBI is examining social media posts investigators believe were made by the shooter expressing support for extremist groups, including Al-Qaida in the Arabian Peninsula, two officials familiar with the investigation said. The officials could not discuss an ongoing investigation publicly and spoke to The Associated Press on condition of anonymity.

FBI officials out of Houston have announced a tip line for anyone in the general public who may have information that could lead to the arrest of the second suspect in the shooting that took place at Naval Air Station Corpus Christi this morning (see information below).

Meanwhile, the suspect who was shot and killed at the base was identified as Adam Alsahli, according to three U.S. officials familiar with the investigation.

Officials also took to Twitter to praise the heroic efforts of personnel on the base.

SWAT team has surrounded a house near Saratoga Blvd that is believed to be connected to the terrorist attack at NAS-CC earlier today.

SWAT Team is currently outside of a home on Greensboro near Acushnet, as CCPD is assisting the FBI.

Naval Air Station-Corpus Christi officials confirmed to 3News Thursday morning that one sailor was injured during a shootout that took place at the base's North Gate.

It happened around 6:15 a.m., prompting a lockdown of the base. The suspect allegedly drove up to an entry gate, drew a handgun and fired at a Navy guard, striking her ballistic vest, according to government officials. That sailor has been released from the hospital and is expected to recover.

Investigators with the FBI confirmed at 2 p.m. that the suspect was shot and killed by security personnel. They believe the incident was terror related, and that a second suspect may be at large in the community.

On Monday, FBI Director Chris Wray and Attorney General William Barr announced developments in the investigation into last year’s shooting at another Naval Air Station in Pensacola, Florida, determining through evidence found on that suspect’s phone that he had connections to Al Qaeda in the Arabian Peninsula (AQAP).

U.S. Representative Michael Cloud was on base shortly after the shooting. 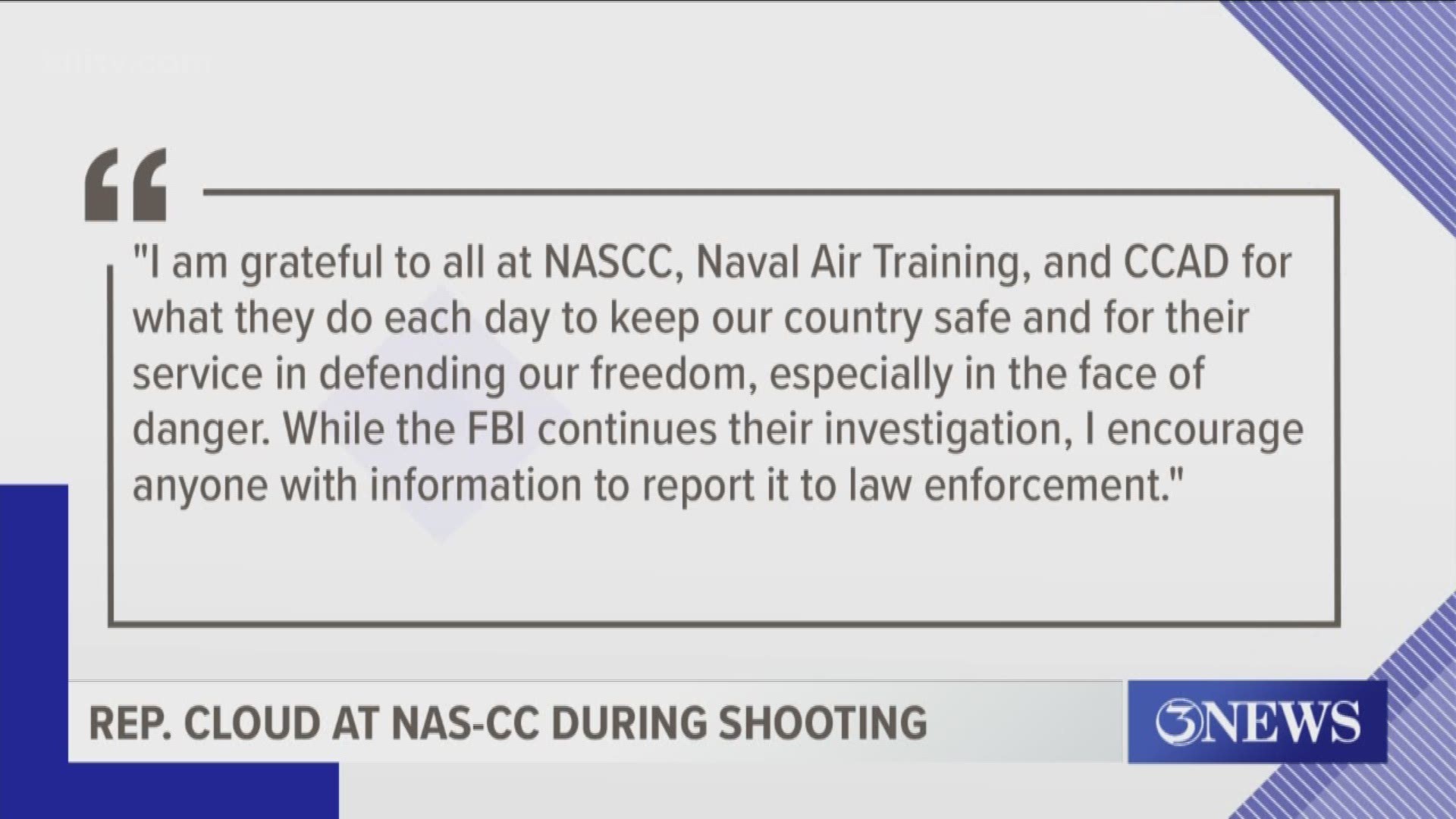 "Earlier today, I was at NAS-CC to meet with CCAD Commander Colonel Atkins and CNATRA Rear Admiral Dwyer and felt completely safe knowing how well protected we were by the men and women serving the base. I am thankful to hear the NSF personnel who was wounded in today’s shooting is recovering, and I am thankful for her bravery in successfully carrying out her duties in protecting the base and its assets. The heroism shown no doubt saved lives. I am grateful to all at NAS-CC, CNATRA , and CCAD for what they do each day to keep our country safe and for their service in defending our freedom, especially in the face of danger. While the FBI continues their investigation, I encourage anyone with information to report it to law enforcement.”

A 3News viewer who was in a line of vehicles outside NAS-CC's North Gate at the time of the shooting shared video from the scene with 3News. You can hear several shots being fired.

Around 7:30 a.m., NAS-CC officials reported that the shooter had been neutralized.

Meanwhile, NAS-CC remained on modified lockdown as first responders and investigators processed the scene. As of 11 a.m., people were allowed to leave the base via the South Gate. The north gate remained closed.

At around 1 p.m., NAS-CC officials confirmed that the sailor who was shot during the incident had been taken to an area hospital where they were deemed in good condition. They have since been released.

The North Gate of NAS-CC remains closed, but the South Gate has been opened to all traffic.

When the incident unfolded, NAS-CC officials put out an alert saying, "NAS-Corpus Christi is now in a lockdown status. There is an active shooter in the vicinity of the North Gate. If you are in or near the North Gate get out and away to safety. Execute lockdown procedures -- remain indoors and away from windows."

They also took to social media to warn drivers to steer clear.

The Corpus Christi Police Department, who assisted in the response, also advised that people avoid the area.

Texas A&M University-Corpus Christi, which is right down the road from NAS-CC, issued a Code Blue, alerting students who may be on campus to remain indoors and avoid windows.

Base officials said the FBI is now the lead investigative entity on the case. 3News will keep you updated as more information is made available.

History of Lockdowns at NAS-CC