The third season was easily the series' best yet, featuring scene-stealing turns from Tom Pelphrey and Julia Garner.

ST. LOUIS — How corrupt can a soul become before it can't ever turn back around toward good again? The third season of Netflix's "Ozark" sure does draw up perimeters on the souls of the Byrdes, the Cartel money-launderers from Chicago who move further away from nobility with each episode.

Let me just say this before we get started on the details: This was easily the best season. From the new cast members to the escalating tension in the story to the way it crammed so much into each episode, showrunner Chris Mundy's series sure took things to a whole new level. Creators Bill Dubuque and Mark Williams, along with their team of writers, twisted the moralities and loyalties of certain characters while slowly revealing the purpose of this season.

Here are my five takeaways, starting with the lightning rod everyone should now know as Tom Pelphrey.

Before "Ozark," Pelphrey was mostly known as the guy from "Guiding Light" and "Banshee," but that should change now. You could call Ben Davis, the brother of Laura Linney's Wendy Byrde, the stick of dynamite that blew up the season. Planted early on as the volatile yet tender-hearted substitute school teacher who rides into The Lake with good intentions, Ben slowly became aware of what his sister was up to. A small batch of criminality? Nope. Wendy is slowly becoming the Walter White of the Midwest, and that broke Ben in half. A romance with Julia Garner's Ruth Langmore broke off half of the wick, and witnessing a cartel murder set off the bomb in Ben's head.

Pelphrey was just brilliant, nailing the details of a bipolar personality with a family soaked in bad deeds. Cheers to the writers for doing it right. A cab ride in episode 9 should bring you to tears. It's Emmy worthy. "I remember what my mind was before the thing that happened ruined my mind. I remember who I am now." Floored. 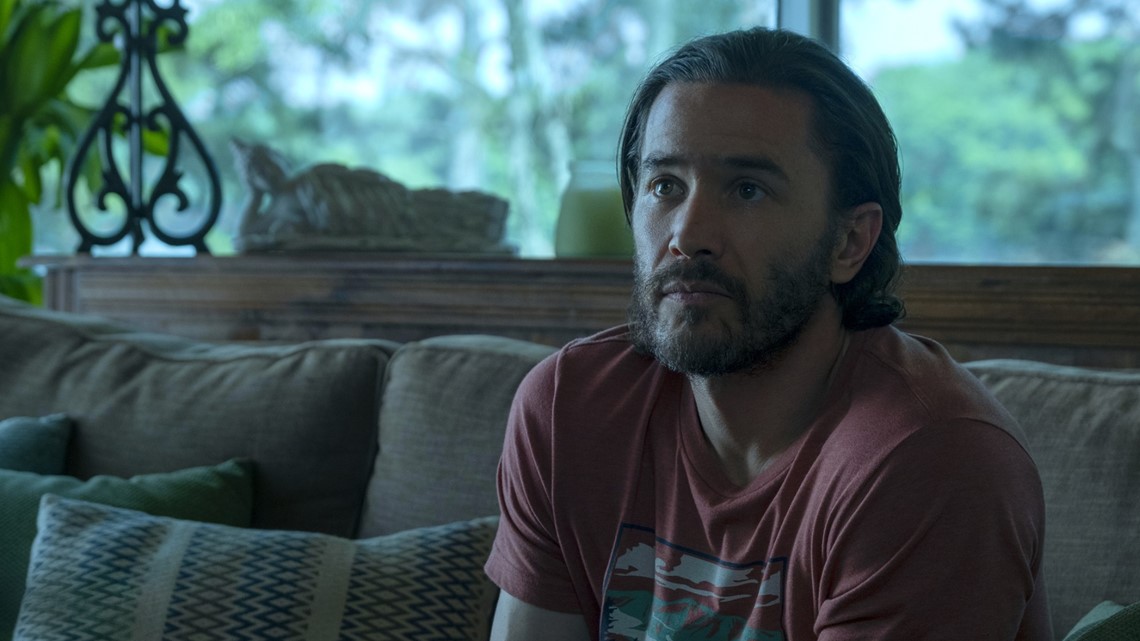 Meet Tom Pelphrey, the perfect storm from Season 3 of Netflix's 'Ozark'
ST. LOUIS - "Well, it's the kind of role that any actor would be excited about. What makes it really great is that the writers have allowed for the layers to be exposed and peeled away over time."

4) Janet McTeer's Helen Pierce was wicked, but she had to go

They waited until the last second to do it, but the character had run its course. You could tell from the jump that she didn't trust the Byrdes and in this world of creation, the cartel lawyer with a family full of broken glass was bound to be eliminated. The minute she made a power move to take away the casino, Helen was toast. It's too bad, because McTeer slayed that role. "We may have dipped our toes in the friendship pool, but I don't think we are going to swim."

(A brief pause for a pull of Stella Artois while I wonder if McTeer did her own stunt and actually fell to the ground after that final scene.)

Granted, few if any people in this world are good-natured souls, but Darlene going from venomous mother-killing wife of the heroin empire to a caring mother of a baby and lover of the young Wyatt Langmore was unexpected. She gets brownie points for socking Wendy and getting away with it while blowing Frank Jr.'s private parts clean off. The way Lisa Emery walks could be a three-part masterclass in femme fatale opera.

The last time we saw the youngest Byrde family member, he was blasting a hole through the living room of his home with a shotgun. He's not taking Ben's death well and the dirt of the family business is starting to stain him. For around 2.5 seasons, Jonah has been a cold-blooded yet willing young company man. He knows what's going on, sees the endgame, and tries to make due with his conscience every night. But the loss of Ben pushed him over the edge and it makes you wonder... will he become another problem child for the family? Will the bipolar disorder latch onto him? Jonah's future is getting dark. Will he be the one who turns the family into the FBI? Nothing is off the table.

While Jonah is starting to turn, Ruth made the full move in the Season 3 finale, leaving Marty and Wendy in their office after they refused to cop to Ben's murder. It doesn't even take ten minutes of screen time for Ruth to accept the offer of Darlene to come work with Wyatt on the poppy seed farm. She's staying in the morally corrupt business but is driving the car herself and has a new teacher. What makes this bad for the Byrdes is that the Langmore and Snell families are natural born Ozark native powerhouses. You pick a fight with one and you'll win, but taking on both of them with young blood at the helm is a bad idea. Ruth Langmore could be their deadliest foe yet.

Here's the thing. It was always headed that way. The moment the Byrdes didn't protect her after the Frank Jr. abuse was one string, but the withholding of Ben's fate was the knife into the chest. It's over but then again, as Navarro stated with the season's last line, "This is a beginning."

Three seasons in and this show is headed for the Mount Rushmore of Netflix’s finest work and one of the best dramas of all time. The first season was great while the second season had false steps, but the third season set the course for at least two more seasons. It's equal parts drama and thriller, even aiming for the heart in episode 4 this season, when we saw the humanistic side of Wendy return and Marty's past flicker in his eyes.

While the supporting cast is phenomenal, this is Bateman and Linney's show. They are the masters at the helm, moving the plot around and keeping the road curvy and unpredictable. Right when you think you know who is more powerful or deadly, something turns. They are in the same boat now and while that bodes well for their marriage, their family is increasingly under attack. They aren't backing down and when you have the Cartel at your disposal, why would you?

Prepare for war in Season 4! The outsiders against the natives, with the FBI dangling in between.