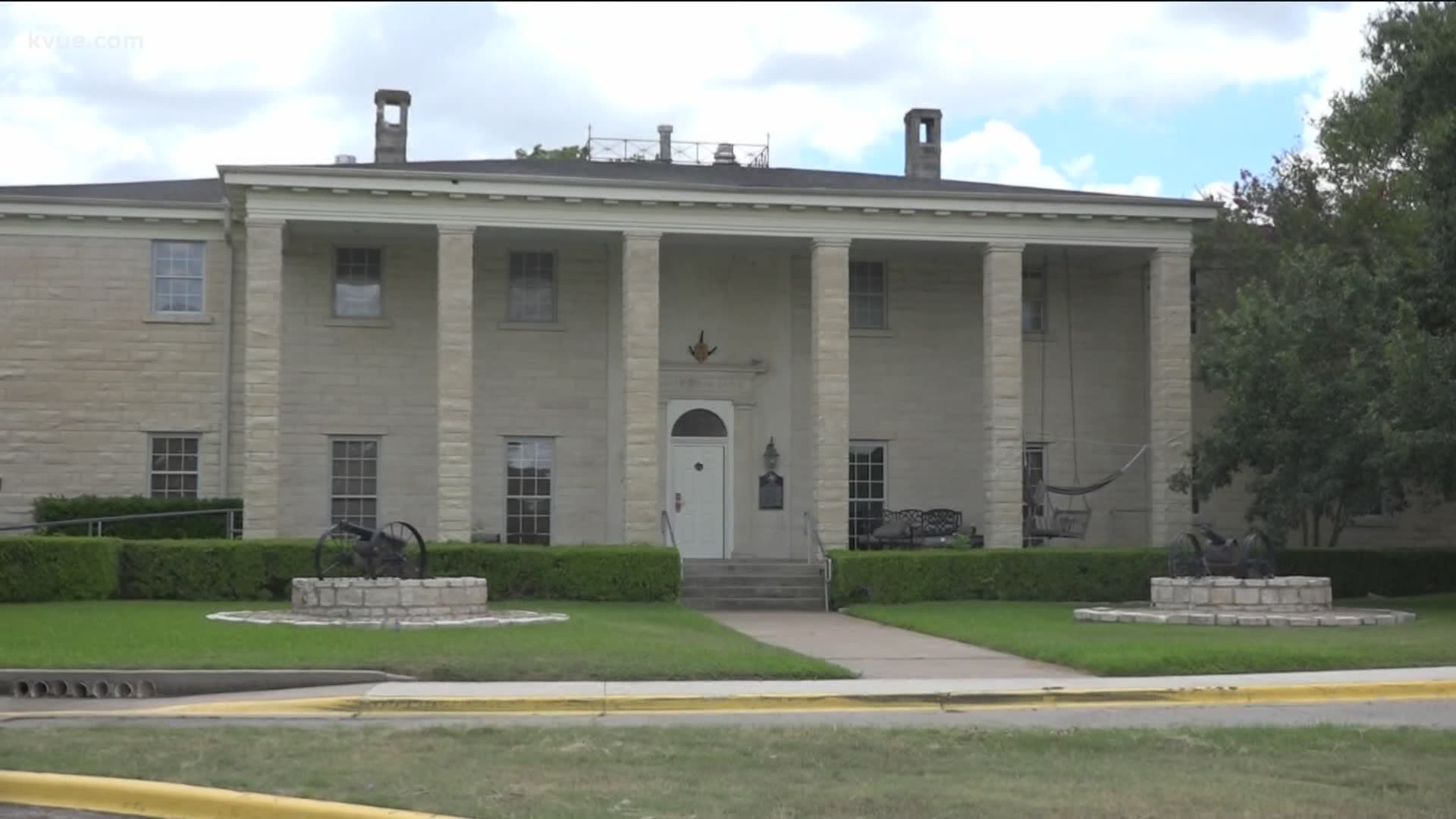 Lee is the so-called "Spiritual Founder" of KA. The Xi Chapter at Southwestern was founded in 1883. The historical marker on the KA house there notes the historical links to Lee and the Confederacy.

"I don't think any of us here are arguing for the erasure of history," Martin Lopez, who graduated from the university in 2018 and is an alumnus of KA, said. "We do want the education in the Varlet, for our new members to know of these connections to the past. We want them to know because [the education] is very one-sided."

The Varlet is a book that is included in new member education detailing the history and some rituals of Kappa Alpha Order.

The post has since been taken down. Days after making the post, the executive director of Kappa Alpha Order suspended the Xi Chapter, which includes terminating any control over the social media accounts.

In an email sent to chapter members and obtained by KVUE, Larry Stanton Wiese explained the decision to suspend the chapter.

"The Kappa Alpha Order National Administrative Office has received a statement that was released on the chapter Twitter account. I am both troubled and disappointed that the chapter released the statement before communicating with the group with whom you spoke on both Friday and Saturday at length. As I indicated to [chapter member], the Order wanted to support you in your
efforts to communicate your stance.

"By releasing this statement without further communication, you and the chapter have violated the trust of your advisors and have misrepresented your intentions to both your advisors and to national officers as well as to the National Administrative Office. As we communicated to you, releasing a statement regarding your chapter’s stance is not a violation of your duty or the Order’s
Constitution and Bylaws. But, releasing a statement after you agreed to submit a revision to the officers, advisors and staff with whom you were engaged does constitute a violation of both your and the chapter’s duties and obligations as referenced in Section 324 of the Order’s Constitution. Likewise, as I advised you on the phone, releasing this statement which is threatening or
incendiary also constitutes a violation.

"As such, I am left with no choice but to suspend the chapter effective immediately until December 31, 2020. During this time, we will engage with members of the chapter and alumni to determine how this breach of duty occurred and whether the suspension may be lifted at that time
or if it needs to be extended.

"As the current Number I, you are hereby directed to comply with Section 325 of the Order’s Constitution which directs that a suspended chapter can conduct no business or operations. This requires you to suspend all social media accounts immediately. Failure to do so may lead to legal action against you or members of your chapter since you are now using the Xi Chapter designation and the name Kappa Alpha Order without authorization."

Because of the threat of legal action, active members at the now-suspended fraternity declined to do interviews. However, alumni felt comfortable doing so. Lopez, along with Mitch Petersen, a 2016 alumnus, both said these changes were a long time coming. At first, these changes were internal.

"Probably for the past five or six years," Petersen said. "First, getting rid of some of the iconography and references to Robert E. Lee in our own chapter. Then, in the current climate with Black Lives Matter protests, this should not have come as a shock to anyone who has been engaged."

In a statement to KVUE, Wiese reiterated the suspension came because the active chapter members, after meeting with national officers to review the statement, did not return to the officers after making any revisions. One alum who was present during those phone conversations said they don't recall promising to return with revisions, but isn't 100% sure. The alum declined to reveal his identity due to his current job.

He added that some revisions were made to the original statement that was written; however, those revisions were not the ones Wiese and the national officers proposed. The alum familiar with the phone call said the proposed changes "weakened" the initial statement and active members did not want that.

KVUE requested the proposed changes, but Wiese is still working to find them. Wiese's statement to KVUE is below, in full.

“KA’s national organization was engaged in ongoing dialogue with the chapter regarding their concerns and were disappointed it chose to release its statement after agreeing to review it once more with local, regional and national leaders. The chapter officers unfortunately acted in bad faith, did not keep their agreement, and violated the Constitution and bylaws of Kappa Alpha by acting insubordinately. As a result, I had no choice but to suspend the chapter’s charter. The issue was the procedure, not the sentiment, as evidenced by another chapter that released a similar statement but was not reprimanded because it worked within our system. Private organizations are governed by rules and processes that must be followed. We are engaged with the larger alumni membership from the Southwestern University chapter and the university to address concerns, reopen dialogue, and find a path forward for the chapter. As an organization, KA has continued to evolve to preserve the best of its history while moving away from symbols that could be misinterpreted or offensive. For example, we have banned the display of the confederate battle flag and any other trappings of that painful era. No one can re-write history, and KA cannot change the past. But we can take steps to learn from the past and work to build a better future. That is why on January 1, 2020, KA hired its first Director of Community Engagement to develop and lead a best-in-class diversity, equity, and inclusion program for all chapters and members. Xi chapter took part in that program this year, and was offered assistance from our Director of Community Engagement to develop a plan that would demonstrate their support for BIPOC on their campus and in their community.”

As a result of the suspension, somebody created a Change.org petition calling on KA on the national level to make a similar statement to the one posted to the Xi Chapter's social media accounts. As of Monday evening, the petition garnered nearly 700 signatures with a goal set at 1,000.

While KA has not made a national statement denouncing the Confederacy and Robert E. Lee, Wiese signed the petition. In the comment section, he said he was signing the petition not because of what it called for but, "because we are having dialogue with chapters and individuals regarding these issues."

Mike Marut
Last week, the Xi Chapter of Kappa Alpha Order at Southwestern Unive... rsity posted on their social media accounts denouncing racism, their historical connection to the Confederacy and Robert E. Lee. Days after making the post, the National Organization for KA suspended the chapter.

In a weekly newsletter sent to the student body on Monday, Southwestern's president, Laura Skandera Trombley, invoked the late Rep. John Lewis to encourage their fight against the suspension.

"... He commented in 2018, 'Never, ever be afraid to make some noise and get in good trouble, necessary trouble.' His words took on a particular timbre when I learned earlier in the week that a statement Xi Chapter posted on their social media accounts noted their membership was resolved to break from their Confederate past and stand firm against bigotry. Their post has become controversial at the Kappa Alpha Order national level in regards to not following their process. These young men are our students, practicing our core values, and publicly acknowledging what is important to them. They are indeed making 'good trouble' that will encourage our community to have open discussion about examining the past, re-envisioning how we understand each other, while giving us direction to shape a shared future."

The communications team for Southwestern sent a nearly verbatim response to KVUE when asked for a statement on the suspension.

Alumni and active members hope the petition will change KA Order on a national level and prompt the organization to lift the suspension, but in an email in response to an alumnus late last week, Wiese said he does not plan to lift it early.

"I do not intend to lift my suspension of Xi Chapter," Wiese said in the email. "Chapter officers need to honor their agreements and adhere to the Constitution and bylaws."