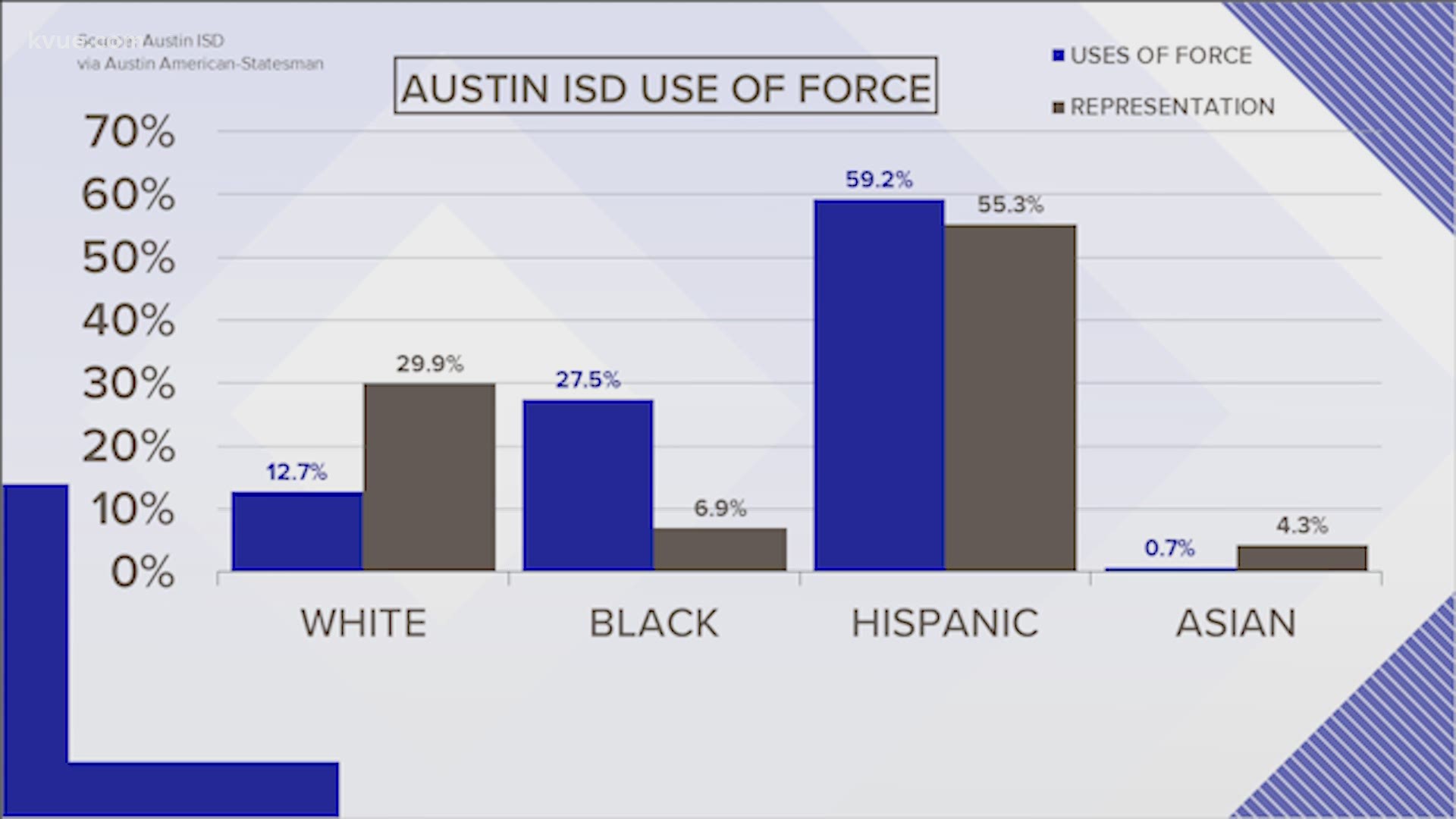 AUSTIN, Texas — According to KVUE's news partners at the Austin American-Statesman, Austin ISD officers rarely got physical when patrolling the school district's campuses between 2015 and 2019, but when they did, Black and Brown students were the ones impacted the most.

"The Austin school district's internal police department keeps track of use-of-force incidents every year," said Sarah Asch, the Statesman reporter who dug up the data. "Austin school police use force a very small percentage of the time compared to the total number of interactions they have with people. But when they do, that force is disproportionately used on Black and Hispanic students. For example, in 2019, Black students only made up about 7% of the district population, but over 27% of use-of-force incidents that year involved a person who was Black."

Asch reports white students made up between 26% and 29% of the student population over 2015 to 2019, but only 6% to 13% of those students were involved in AISD police use-of-force incidents.

"Use-of-force is defined as any time an officer puts his or their hands on a student," said Asch. "So, that could be in a school setting, breaking up a fight or something like that. It also includes display or threat of force. That could be pulling out a weapon and threatening to use it, even if that weapon isn't discharged."

Asch said the number of use-of-force incidents in that time period fluctuated and AISD told her there was no clear reason why.

In June, KVUE interviewed a couple social justice organizations calling on the AISD Board of Trustees to abolish the AISD Police Department. Austin ISD said in a statement, at the time, that it's committed to providing safe school environments for students.

"What better than to show and demonstrate Austin's progressive stand than to take a bull position and say that police don't need to be in schools and follow this domino effect that's occurring across the country?" said Andrew Hairston, the director of Texas Appleseed and a co-signer of the letter.

Asch said she also interviewed Texas Appleseed and the nonprofit blames a few things for the use-of-force numbers.

"Just kind of the general negative stereotypes that exist in our culture, in our society, about Black people, especially Black men – one of them pointed out them being seen as maybe more unruly or combative. It could lead to teachers, administrators, school police officers, other school officials to involve school police in interactions that involve Black students in a way that they maybe wouldn't in an interaction that only involved a white student," said Asch.

Asch said the dataset she analyzed includes all use-of-force incidents that officers employed by AISD are involved in, off and on campus.

"Sometimes officers will work a weekend shift as a security guard. All of those incidents together make up these reports, and the department says that's for the sake of transparency, knowing what officers are up to, even when it's not directly related to the school," said Asch.

The report shows most people involved are under the age of 18 and Asch said specifically 11- to 14-year-olds are the most represented age group.

"Roughly middle school students, and the department says that's because those students are more likely to be in fights on campus and have those fights be broken up by officers, which make up, according to the department, a fair number of those use-of-force incidents," said Asch.

AISD officials told Asch the numbers only show half the story and the incidents are usually minor, with officers assisting in behavioral issues. AISD also said the system used to gather data for the use-of-force reports is "flawed."

"Basically, those forms that officers fill out when a use-of-force incident occurs are Scantron forms, like little multiple-choice bubble forms," said Asch. "The department said that limits their ability to see trends in real time and to be specific about what's going on. I know that system is set to be upgraded this year. They're hoping that in the future they'll have a little bit more information on this going forward."