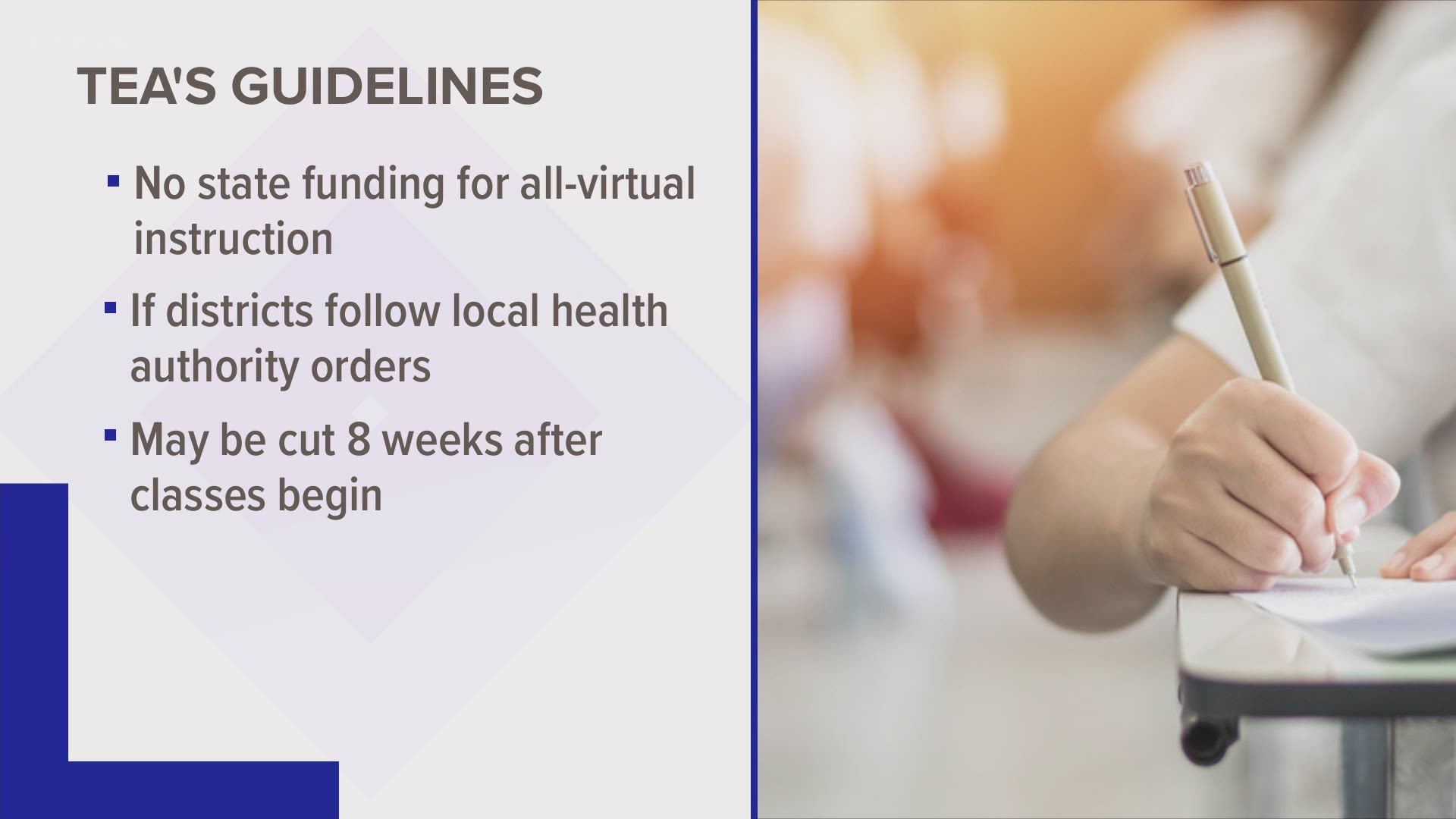 AUSTIN, Texas — Texas Attorney General Ken Paxton on Tuesday issued guidance for the reopening of schools for the upcoming school year amid the coronavirus pandemic. However, it conflicts with what local health authorities and the Texas Education Agency (TEA) have been saying.

Though Paxton said local health authorities have played an important role in protecting the health of students and school employees, they cannot issue sweeping orders on closing schools for the sole purpose of preventing future COVID-19 infections. Instead, Paxton said their role is limited by statute to address specific and actual outbreaks.

On July 14, Interim Health Authority for the City of Austin and Travis County Dr. Mark Escott issued an order saying school districts should not reopen schools for face-to-face instruction until after Sept. 7.

"The Health Authority’s school closure order was a control measure issued in coordination with Travis County superintendents," Austin Public Health said Tuesday. "The purpose of the order is to protect the health of the public. The City of Austin will continue to work closely with school officials and leaders to ensure the health and well-being of our children, faculty and staff."

On Wednesday, Bastrop County rescinded its health authority order in response to Paxton's letter, saying the decision was up to the local school district policymakers.

On July 15, a TEA spokesperson confirmed with KVUE that local public health officials would be able to keep Texas schools closed for in-person instruction this fall without risking state education funding, as long as they offer online learning for all students. This happened after school district leaders across Texas wrote letters to the governor and the TEA asking for more power.

However, that appears to have changed Tuesday under the new guidelines. According to the TEA, schools that go online-only because local health authorities tell them to will not get funding from the state. But there are exceptions, such as if a start-of-year transition period is in place, such as the 8-week transition period the TEA is giving school districts. (These periods are described in detail on pages 20 and 21 of the TEA's Attendance and Enrollment FAQ.)

Earlier in July, the TEA said school systems can temporarily limit access to on-campus instruction for the first four weeks of school. School systems can continue to limit access to on-campus classes for an additional four weeks, if needed, with a board-approved waiver request to the TEA. These guidelines are still in place. You can read the TEA's full list of new guidelines online here.

After that transition period, the TEA will not fund schools.

KVUE spoke with a spokesperson for the TEA on Tuesday, who said it was important to note that Paxton's guidance letter is an opinion and not legally binding. They also said guidance is ever-changing.

“As the Texas Attorney General’s guidance letter of July 28, 2020, indicated: ‘...local health authorities may not issue blanket orders closing all schools in their jurisdiction….’ The guidance letter further provides that health authority orders may not conflict with executive orders of the governor; they must apply control measures required by statute.

“As a state agency, we will follow the Attorney General’s guidance. Consequently, a blanket order closing schools does not constitute a legally issued closure order for purposes of funding solely remote instruction for an indefinite period of time. However, another valid funding exception may apply, such as a start-of-year transition period. For example, school systems may begin the year virtually under TEA funding waivers for up to four weeks, and subject to a vote of the local school board, can extend that for an additional four weeks. TEA will also continue to adjust its waivers as the situation warrants.

“Protecting the health of students, teachers, and staff remains our first priority.”

According to Paxton’s guidance, and based on Gov. Greg Abbott’s Executive Order GA-28, only public school officials can decide whether, when and how to open school but must follow guidelines from the TEA. Private schools do not have to follow TEA guidelines but the order states they are encouraged to do so.

The TEA Coronavirus Support and Guidance section on its website includes a line that appeared to contradict Paxton's guidance.

"TEA does not have the general authority to close schools for matters related to health," the TEA said. "This authority lies with the local health authority, DSHS, and the Governor of Texas."

And the executive order from the governor prohibits local authorities from issuing any restrictions that are inconsistent with his.

“Accordingly, GA-28 both supercedes local orders that restrict the permitted operations of schools and suspects relevant laws that could allow local officials to impose restrictions on schools that are inconsistent with the Governor’s order,” said Paxton.

"The Texas State Teachers Association has more confidence in the professionalism of local health officials and their determination to act in the best interests of all Texans, including our children," said Molina. "We have less confidence in Ken Paxton, whose primary goal as attorney general has been to advance an ideological agenda. Now, he is promoting President Trump’s election-year demands that school campuses reopen prematurely, regardless of the price that educators, students and their families may pay."

“We are appalled at the notion that in a situation where local health authorities may deem conditions unsafe for in-person schooling, the state is essentially forcing districts to bring students and teachers onto campuses,” said TCTA Executive Director Jeri Stone. “We continue to maintain that decisions regarding health issues should be made free of political influences, and that district officials should rely only on scientific data and metrics approved by health officials to determine whether it is appropriate to provide in-person instruction.”

“Education of our children is an essential Texas value and there is no current statewide order prohibiting any school from opening,” said Paxton. “While local health authorities may possess some authority to close schools in limited circumstances, they may not issue blanket orders closing all schools on a purely preventative basis. That decision rightfully remains with school system leaders.”

A copy of Paxton's letter can be read here.

MORE ON CORONAVIRUS AND SCHOOLS: