Several Central Texas school districts gave teachers resources on how to include the 2021 presidential inauguration in their curriculums. 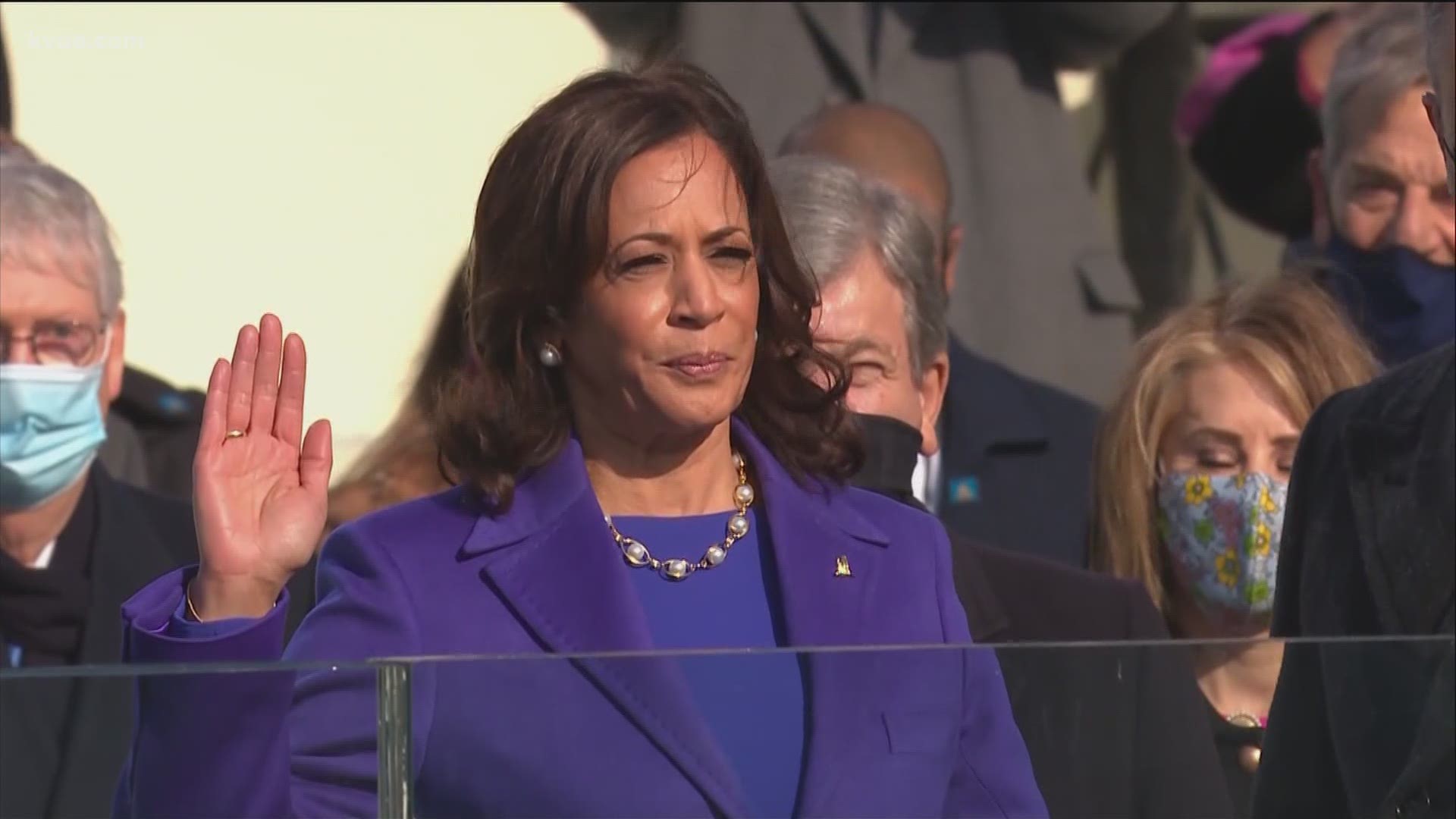 AUSTIN, Texas — A few Central Texas school districts provided their teachers with resources on how to incorporate the 2021 presidential inauguration into lesson plans. President Joe Biden and Vice President Kamala Harris were sworn into their offices on Wednesday and many young female students said it was an honor to watch history.

"It was a really inspiring moment and a really hopeful moment for me to see the first female vice president, the first Black vice president and the first Asian-American vice president. I mean, she broke so many barriers by becoming vice president. It was a day where I realized that change is possible, that progress is occurring, and that if we use our voices and continue to be a part of government, be active in politics, that we can be represented and we can be heard," said Emme Veselka, an Austin ISD senior at Ann Richards School For Young Woman Leaders.

"I was watching it surrounded by my mom and my sister. To me, it was inspiring and empowering because not only was I surrounded by the two people in my family, but the two strongest women in my family that I look up to. It empowered me that anything is really possible and, something that our teachers strive to tell us at school every day, that whatever we put our minds to, if we believe it, then we can honestly do it. I think watching her take the oath of office, it's just a testament to how much work she's done and how much she's had to put in," said Annalisa Garcia, an AISD senior at Ann Richards School For Young Woman Leaders.

"Honestly, I was thinking earlier about it and how big of a role model she can be to some other girls, some younger girls who maybe whenever they grow up they want to have like positions of power, like Supreme Court justices, presidents or vice presidents," said Gia Mitchell, an eighth-grader with Leander ISD.

Austin ISD said their teachers and students could watch the ceremony if their schedules allowed it. In a document given to teachers, AISD said teaching about the inauguration is an important part of understanding how the government works and considering the roles, responsibilities and challenges of the presidency.

"It is an opportunity for students to reflect on what the transfer of power looks like. It also helps students understand the current reality of the nation and the president’s goals and message," said AISD in its resource packet for educators.

Leander ISD said its social studies curriculum team created a list of instructional resources, like AISD, to support the inauguration ceremony. LISD said its lessons are based off Texas Essential Knowledge and Skills (TEKS). When incorporating livestreaming events or clips on current and/or historical events, there will be a relevant connection to the curriculum, according to LISD.

Manor ISD officials said they also allowed teachers to show the presidential inauguration live, and campuses like Decker Middle School played it in their cafeterias and classrooms.

"We did have our teachers post the link and they also had an assignment posted for them to create their own oath and things of that nature," said Decker Middle School Principal Dayna Anthonyswain. "Some people never got that opportunity to see true history being made, and so, to have some representation, it does show – male, female or whatever – that you can do whatever you put your mind to."

"Women can do anything that men can do," said Joselyn Lopez, an eighth-grader at Decker Middle School. "It's important so that boys and girls can know that anything that they put into mind, any goal that they have, they can accomplish. It doesn't matter your skin color, your race, if you're a girl or boy – it does not matter. You can accomplish anything."

KVUE also interviewed some Hays CISD students who watched it at home with their grandparents.

"I thought that was really cool because she was the first female vice president. Girls can be anything they dream," said Leila Valdespino, a 7-year-old with Hays CISD.

Hays CISD officials said they left the decision to teachers if they wanted to use the current event as a teaching moment for students.

The Dallas Morning News reports some North Texas school districts encouraged teachers to watch the presidential inauguration with their students, but other school districts told campus leaders not show live footage in class.

According to the report, Plano ISD administrators decided not to show the inauguration ceremony to their students.

Keller ISD, another North Texas school district, gave students the opportunity to view the presidential inauguration, and each of Keller ISD's 42 campuses decided their own plan of action regarding how their students may view the address based on schedules and logistics. Keller ISD also let parents opt their children out of watching the ceremony.

AISD's Sukeji Tombe, a senior at Ann Richards School For Young Woman Leaders, said she was glad she was able to watch the historic moment when Vice President Harris walked into the White House.

"I see myself in her, and seeing myself in her I know that I can really break any barriers. And even though someone might not see me in a space that I strive to be, I know that I could be there," said Tombe. "And I'm just so glad that Biden had picked her because I believe she was a perfect candidate for vice president and she is going to be an awesome role model to me and girls who look like me and the whole world."

"Her determination and her focus to make sure that everyone's well-being was put first is something that I really love about her," said Lizbeth Frausto, another senior at Ann Richards School For Young Woman Leaders.