Through a three-year program, students at Clifton Career Development School are learning the skills needed to succeed in their future technical careers. 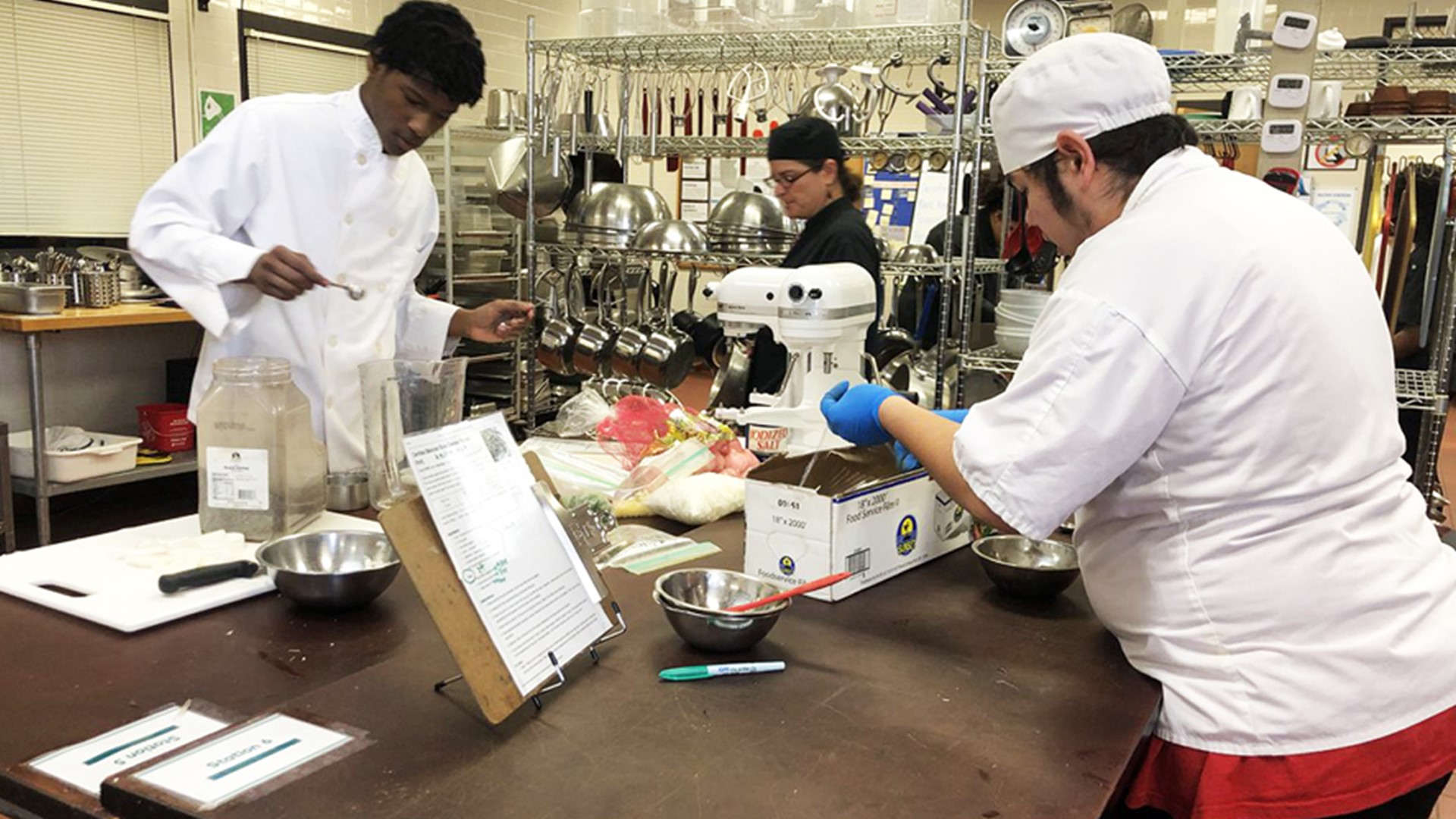 AUSTIN, Texas — In a commercial kitchen stocked with spices, vegetables and a medley of colorful ingredients, a group of students with special needs prepare for their futures in the culinary world.

They are part of Clifton Career Development School's culinary program. At the school, high school students with Austin Independent School District spend three years learning the skills necessary to set them up for a successful future as a chef or in any technical career they wish to pursue after high school.

Throughout the program, a few times a week, students travel from their corresponding schools to either Clifton's campus or to their culinary internships.

Tatiana Antonio, the culinary arts teacher at Clifton, said the program is just as rigorous as any other culinary program in the city. She said the difference is that the learning style is tailored to fit students with special needs.

"These kids need hands-on, walking them through, doing pie charts, doing a lot of visuals and lots of demonstrations. So that's why we really need to have those smaller class sizes," Antonio said.

In their first year of the three-year program, students learn the basics of working in a commercial kitchen; from sanitation and hygiene to knife skills to measuring and to cooking various foods, according to Antonio.

All of their practice and preparation leads up to a weekly luncheon hosted at the school. Clifton's hospitality program assists with setting up the dining room.

"We use this opportunity to hone those skills, and it's a real-life thing," Antonio said. "They are not just making food to make food. They are selling it and the proceeds we get go back into the program."

Josh Shear, a third-year student in the program who is preparing for college, reminisced on what his first year taught him.

"It teaches us how to do the actual task we are learning, but it also teaches us about how – when we don't understand stuff – we can go to other people and work together to help accomplish a goal," he said.

In the second year of the program, students take their skills to the real world, interning at kitchens around Austin such as in school cafeterias and restaurants.

Shear interned at L'Oca d'Oro, an Italian restaurant where he helped prepare meals. There, he pressed out pasta and made brine to cure pastrami, among other tasks.

"It is a really good feeling to know that I am not just doing busywork, I am actually doing something that makes a difference to other people," he said.

In the last year of the program, the students maintain their internships once a week and take part in a practicum that teaches them the skills needed when entering the workforce.

Credit: Tori Larned, KVUE
Students with a program in Austin ISD are learning the skills they need to succeed in the culinary world.

"Our students can do the work, but oftentimes they have a hard time marketing themselves or showing that they have the ability to work competitively," said David Carroll, the third-year practicum teacher at Clifton.

Like any career path, these students will face challenges and difficulties.

"The hardest part I think is just to pick myself up and keep going and just trying again on a project," Shear said. "It's almost always paid off for me in a really good way."

Tedesco expects the tasks he gives his interns to be to the standards he wants his customers to experience. At the same time, he said cooking is a medium he sees them really connect with.

"These are brilliant scientific minds that happen to choose food as the exciting medium for them to communicate, and the impact is really widely felt," Tedesco said.

Not all students in the program will go on to pursue a future in cooking. Last summer, Shear – who wants to pursue degrees in physics and math – partook in an internship at NASA.

However, he said the experience and knowledge he gained in this program is priceless.

"I think these past few years I wouldn't have been doing as well as I have without all the support I have gotten from this program," he said.

As Antonio continues to teach the future generations of culinary students, she hopes what they take away from this is much more than just making a nice meal.

"I hope the skills they get here – not just in the kitchen, not just soft skills – but teamwork, confidence, self-reliance and being proactive and problem-solving. I hope they can use those skills in their real lives," she said.

The luncheons are every Friday, with some exceptions, at noon. It costs $6 for a buffet-style meal. It is open to the public, however, Antonio asks that guests let her know about a week in advance who is coming.

RSV on the rise in Texas