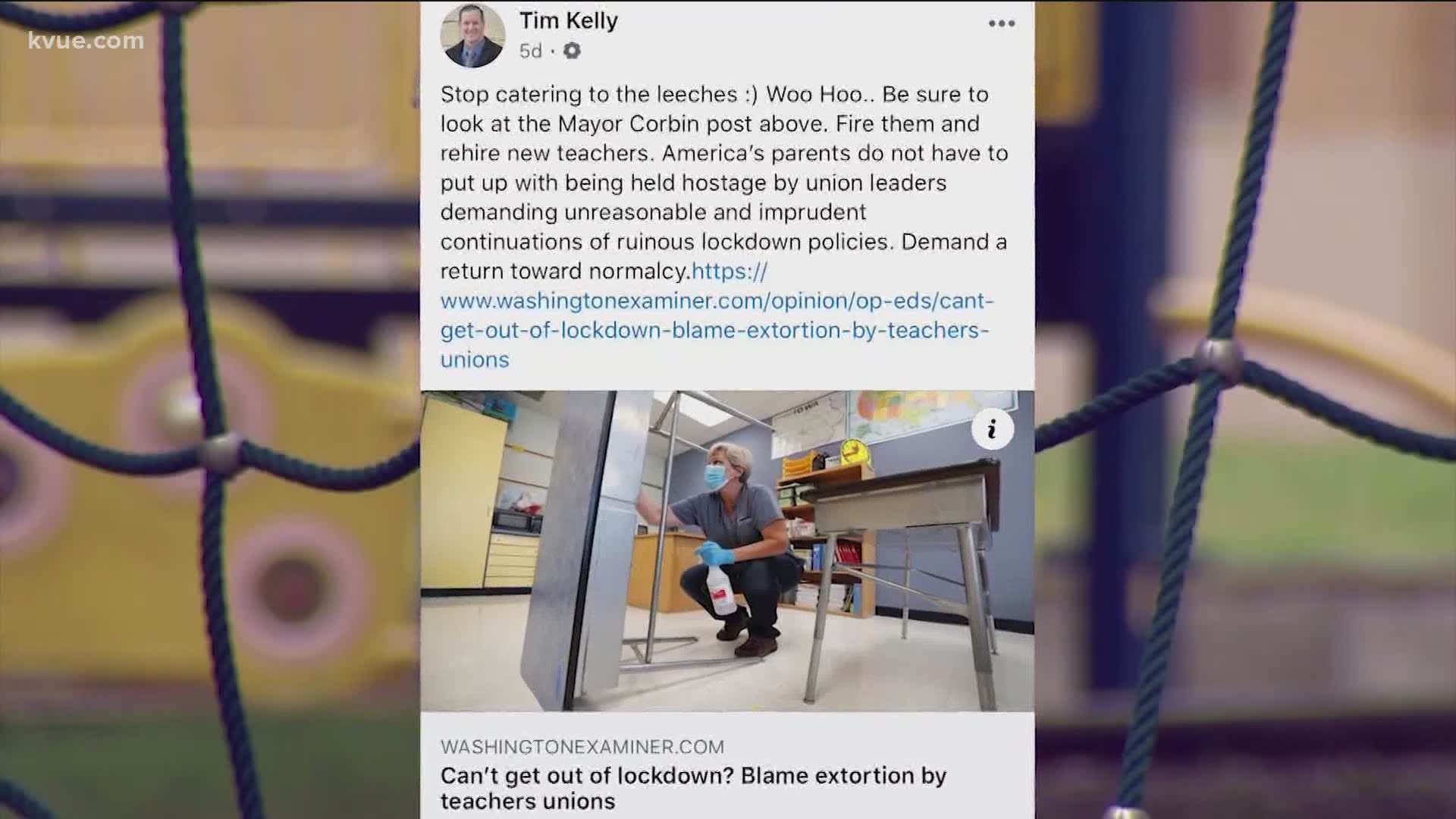 The post said in part, "Stop catering to the leeches ... Fire them and rehire new teachers." Kelly also said in the post, "America’s parents do not have to put up with being held hostage by union leaders demanding unreasonable and imprudent continuations of ruinous lockdown policies. Demand a return toward normalcy."

The post has an opinion article attached talking about plans to reopen schools during the coronavirus pandemic and it claims working parents will be impacted the most if schools don't reopen for on-campus instruction. Many teachers, like Leander ISD Theater Director Alisa Mirabella, were quick to respond.

Teachers hope school, state officials listen to concerns on returning to the classroom

"To have a man, who's supposed to be respected in a leadership position in our community, be so hateful ... It's been so hard on teachers anyway. We are working so hard trying to figure out how to make this work," said Mirabella. "I can't even imagine what would happen to my heart if something happened to one of my students or one of my colleagues."

Cedar Park's Mayor Corbin Van Arsdale posted an apology to the community calling it an "embarrassing act" and "not an opinion" of the Cedar Park city government nor city council.

Councilmember Kelly said, in a different post, he was misunderstood. He said:

"It's unfortunate that so many of the people objecting to the teachers union post didn't read the actual article and discern the post in context. Had the outraged people done that, they would have realized that the post was in regards to leaders of teachers unions in other states and was not related to teachers in this community."

"I'm not even thinking about his post. I'm thinking about keeping our students safe. And that's what all educators are trying to do," said Molina. "We actually have a return of safety standards that we created. That's five pages long. So I would encourage him to actually read it and find out what it takes to return to school and keep our kids safe."

"We're doing the best job that we can there. We want kids to be back in the room. But what we want is safety for them and us. And there are other concerns, as well," said Wright. "I think Mr. Kelly owes an apology to the community, the city of Cedar Park. I think it really left Cedar Park with a black eye."

In Kelly's Facebook post, he states, "AS I launch my campaign for SCHOOL BOARD LISD!" but Leander ISD officials said, to this date, Kelly has not filed to run for the school board.

"We're trying to stop a death of a student, a coworker or a community member. And, so, we know that we're doing things for the right reasons. It doesn't matter how anybody else wants to paint it. We know we're doing it to save lives," said Molina.

Kelly also came under fire in April for attending a rally to reopen the country at the Texas Capitol.