Dr. Stephanie Elizalde discusses what the school district plans to do as COVID-19 cases and hospitalizations rise. 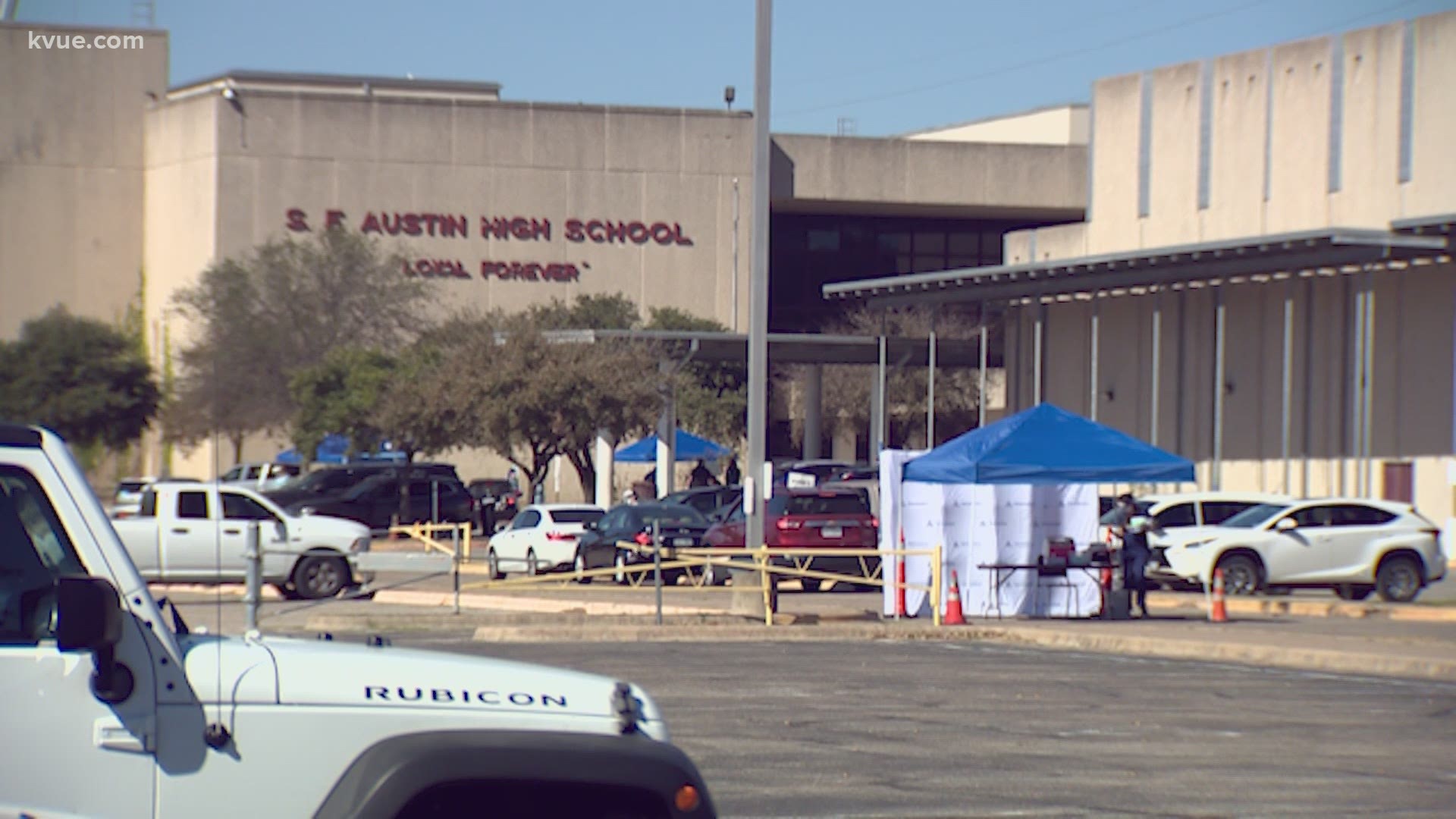 It's a warning Austin ISD's superintendent Dr. Stephanie Elizalde was prepared for, as she's been in close communication with the health authority, monitoring the rise in coronavirus hospitalizations.

KVUE's Mari Salazar spoke with Elizalde about the possibility of closing schools altogether after winter break, an update on medical accommodations for teachers and what plans AISD has for vaccine distribution.

Salazar: Austin's hospitalization rate has officially surpassed the threshold set by the Stage 5 risk-based guidelines. How is AISD preparing for that now? Have you reached a decision on how days will be made up if there is a complete closure?

Elizalde: This has continued to be a moving target because we are talking about every day there are different metrics that we gather. And by that I mean we really can't predict how many cases they're going to be, how many are going to require hospitalizations. Let me first begin by saying that closure, a complete closure, would be our last resort. The only reason that's even being considered is because of the financial implications because going, one, 100% remote essentially is the same as closure, except at least we could offer virtual instruction. However, currently under the Texas Education Agency's interpretation and requirements, if we go 100% remote, meaning we do not offer any on-campus, in-person instruction, then we will only be funded at 50%. In fact, we have to make up two-and-a-half days. If we were to do that, let's say over five days, if it's four days and we have to make up two days. And so, why does that matter? Not only would we have to make up days, but now the spring is beyond the teachers' calendar contractual days, which means I would have to add days to their calendar, to their contract. Let me add more work to already heroic, exhausted teachers. I also have to incur a fiscal cost. There's a note because now I have to pay them because those would be days beyond their current contract. That is why going 100% remote seems to have more challenges. Either one of those options is still going to be a last resort. We must do everything we can to keep our schools offering both remote and on-campus instruction.

Salazar: When will this decision be made? Will it be this week or next week?

Elizalde: I wish you had a crystal ball so we could both know because all of a sudden the data could flatten out. And so, what if today I use, I believe there were at 54 hospitalizations? Well, does that put us over the 50 moving average? Does that mean we should close? Then over the next three days, we have a flattening of those numbers. And then what? Then do I say, 'No, hold on, let's not close?' I feel like this whole year I've been doing the hokey pokey decision-making approach. I put my right hand in. I put my right hand out because one day I'm saying we're fine, the next day I'm saying we're not. I know people think, 'Well, what in the world is going on over there?' But the data that we utilize to make the decisions are changing every single day. So right now, when are we going to make that decision? Right now, the decision has been made that we will return to the same options we had at the close of semester one. So by that, I mean right now the decision is we will return with remote and on-campus options available to all of our families. That's where we are right now. I met with Dr. Escott and his team and other officials today. And while the data is still concerning, we are not yet at a point where either Dr. Escott or his team are recommending school closure at this time.

Salazar: Many teachers and staff members have been wondering, has AISD tried to argue the Texas Education Agency violations?

Elizalde: If we push back, then we're ignoring the fact that the evidence is very clear. A much larger percentage of our students are indeed having losses academically, having mental health challenges because of the circumstances in this pandemic time when they don't have on-campus instructional options available to them. That is not disputable. Now, are there some students who are benefiting greatly from also having to do remote learning due to some other challenges? Absolutely and I'm thrilled that some of those students are doing that across the nation. The evidence is that schools may be one of the safest places because, in fact, we're one of the only organizations that can mandate masks.

Salazar: Moving on to the medical accommodations. Education Austin filed 127 grievances for teachers denied from getting accommodations on Monday. As we're just a few weeks away from school starting up, what's the update for those teachers who are upset with this decision and for those who filed the grievances?

Elizalde: Well, we'll absolutely be following the process that our grievance outlines. Over 200 teachers and other staff members have reached out to us and said, 'If I can't work remote, what else can we do?' Examples of additional protective equipment, such as plexiglass around an entire desk area, ensuring that there may be in a larger classroom size if they feel they have too many students, ensuring that their room has additional ventilation, ensuring that they have N-95 masks. There's a varying level of accommodations rather than just one extreme to the other. I really want to reach out to them to say work with us.

Elizalde: It is absolutely necessary that our teachers be in the classroom. I know this is a very difficult time and I would ask everyone to recognize that what we did do is we allowed all of those accommodations to go uninterrupted throughout the entire semester at a very high number of accommodations in comparison to everywhere else. And so, rather than looking at this from the perspective of what we've taken away, I want to reach out to them and work with them on how can we meet somewhere in between.

Salazar: It's official now that teachers are among those next in line for the vaccine. Can you tell us how that be handled within the school district?

Elizalde: Yes. So, we need to gather information from our staff about what percentage are going to be willing to take the vaccine. Certainly, I would be willing to do so publicly, if that would encourage others, but I also don't want to jump the line. So, it's a balance between ensuring that we have confidence, as many of the doctors, physicians nationally and statewide, Dr. Fauci, I believe, got his shot of course. We've seen the president-elect and others also receive the vaccine to continue to demonstrate that these are safe vaccines. That being said, we absolutely will start with those [high-risk] staff members. We need to tier our staff. We know there won't be 11,000 vaccines available all at one time for our district. They will come in batches. So, we want our individual employees, team members who are working directly on campuses and that are 65 years or older or have medical conditions, that those would be the first group. We would want them to be the first ones in line and then from there, work our way back to the point where then we could begin serving those individuals who want the vaccine, who may actually have an approval to work from home.

Salazar: Is there any idea how many teachers want or don't want the vaccine and will it be mandatory?

Elizalde: Oh, no. First of all, it's absolutely not mandatory. Let me be very clear. It is absolutely not mandatory, whatsoever. I really don't have any idea. I want to send out that survey, but I'm also hesitant because this is a period of time when I would want individuals to get some rest. Our team will get together this week to decide whether we should send out the survey and, of course, reminding everyone they can fill it in even after we return, but maybe that would give them some opportunity to think about it.

Salazar: Is there anything you want to add about any of the topics we covered today?

Elizalde: Let me just reiterate again that the closure or even a 100% remote would be our absolutely last resort. I think we've learned a lot from the first semester. And part of what we've learned is, when we mask and when we do hand hygiene and when we use social distancing, what we find is us having a healthy and safe environment. But you must continue to do that. We're going to have to continue. I know even as a community, it's very hard to continue to do that, but that's what I think has allowed our schools to remain as healthy as they have been. Is it perfect? Is it risk-free? No, of course not, but we also know it's still necessary. Then I would want to say that the most recent communication we sent out that reminded everyone of essentially the three options staying as we are going 100% remote or being 100% closed was really to reinforce our classified employees who work also very hard that we did not want them to worry about their pay. When it was announced that closures could be a possibility, some of our employees went, 'Does that mean I'm not going to get paid in December or in January?' And, of course, Austin Independent School District and its Board of Trustees and its community would never support that. This is beyond anyone's control, but I want to reiterate that that was nearly done to help ease some of the angst that I was hearing from our classified team members. In no way did that mean we were already moving to a closure. So I would want to re-emphasize closure is an absolute last, last resort. And frankly, so is the 100% remote because of the financial implications. It really doesn't provide us that assistance. So, as we speak today, Mari, maybe we will be returning to remote and in-person instruction when we return for students Jan. 5.

Beto O'Rourke to teach a course at the University of Texas