If approved by voters, the proposed bond projects would raise the school district’s tax rate by 3 cents per $100 home valuation. 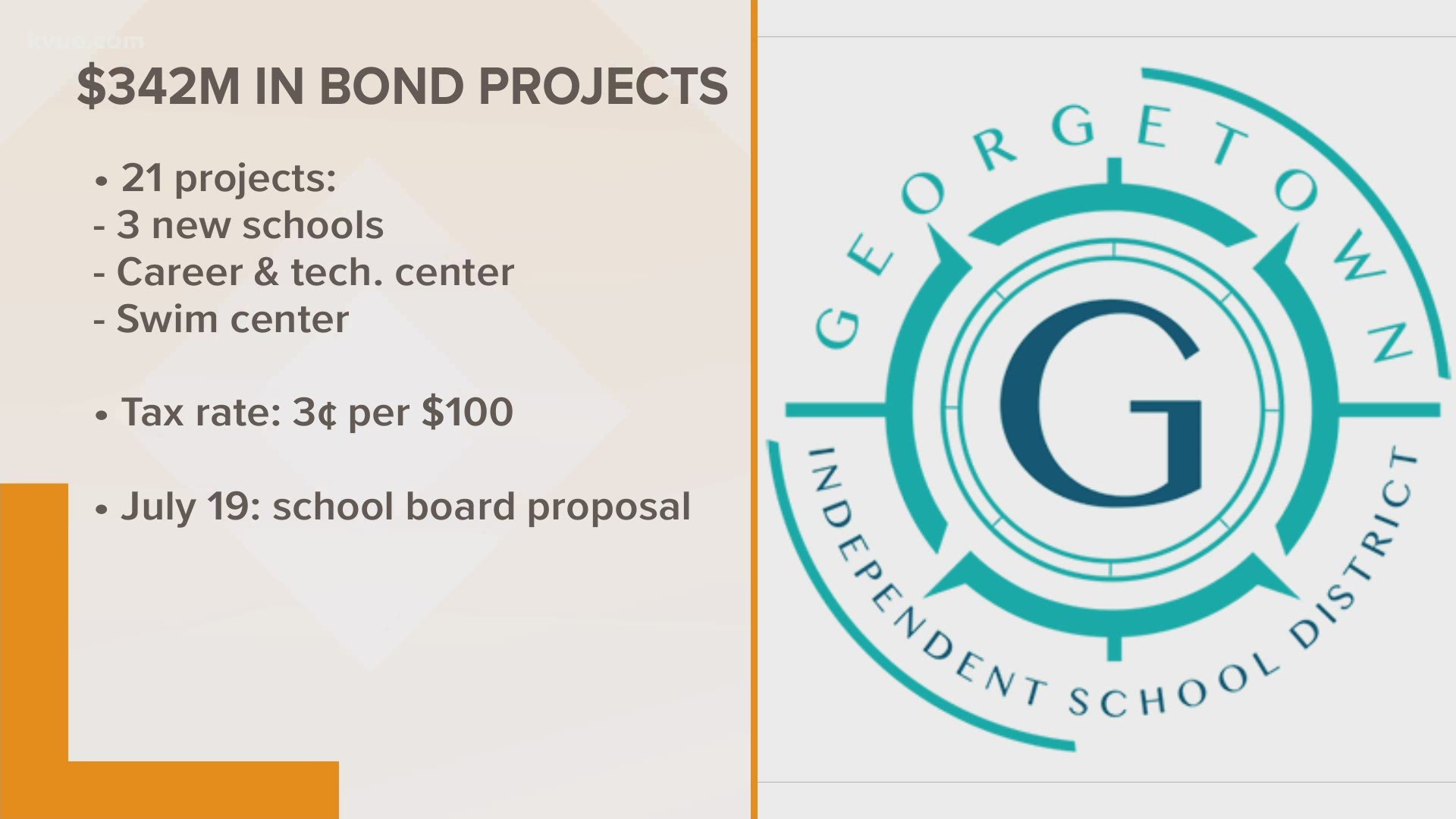 GEORGETOWN, Texas — Georgetown ISD’S Citizens Advisory Committee (CAC) is set to present a list of $342 million in bond projects later this month to the school board. If approved by voters, the 21 proposed bond projects would raise the school district’s tax rate by 3 cents per $100 home valuation, according to KVUE’s media partners at the Austin American-Statesman.

Georgetown ISD spokeswoman Melinda Brasher said if all the bonds are approved, a homeowner in the district with an average-priced home of $320,000 would pay $90 in taxes.

The proposed bond projects include three new schools, a new career and technology education center and a competition-sized pool, potentially housed at a new swim center. The YMCA and City of Georgetown would help pay for the swim center.

The YMCA presented a proposal regarding the new swim center to the Georgetown City Council in June, but the council took no action on it. The YMCA proposed to pay $5 million and City pay $3 million to help fund the project.

The bond projects set aside $19 million for both the pool and swim center.

The three new proposed schools include two new elementary schools and a middle school. About $66 million will fund the middle school in the Parmer Ranch subdivision.

CAC is planning for the two elementary schools to be built in southwest and southeast Georgetown, both costing $50.7 million. Brasher said projections show the school district could grow by 10% in the next year, so it needs the proposed projects to keep up with growth.

"Our projections are now showing we are going to need new elementary schools in the southeast and the southwest parts of Georgetown in the next couple of years," Brasher said.

The $66 technology and new education center would offer aerospace, criminal justice and culinary arts programs, according to the Statesman. It would also include a coffee bar and bistro for students ages 18-22 with disabilities in the bridge program to run.

Brasher said the district is planning on building the swim center on land it owns near McCoy Elementary. It would include the new pool, a gym, day care area and fitness and exercise rooms. The district is currently renting a pool from the homeowners association.

CAC is set to present the proposed bond projects to the Georgetown school board on Monday, July 19. If the board wants the projects on the November 2021 ballot, it must take action before Monday, Aug. 16.

One dead after shooting in Cedar Park