The University of Texas Student Government had a first reading on legislation to remove the Young Conservatives of Texas (YCT) Tuesday. 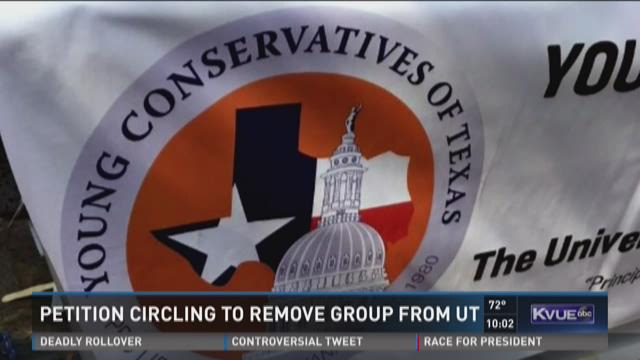 The University of Texas Student Government had a first reading on legislation to remove the Young Conservatives of Texas (YCT) Tuesday.

Recently a UT student started a petition to remove the group from campus. As of Nov. 1, the petition has over 800 signatures.

KVUE spoke to YCT of UT Chairman Vidal Castaneda Tuesday. Castaneda feels the discussion about removing the group from campus is an infringement of his civil rights.

"We are trying to highlight exactly what the university is doing and we don't agree with it," Castaneda said.

Castaneda and other members sent a letter to UT President Gregory Fenves threatening legal action if the group is forced to leave. The letter states University employees have attacked YCT-UT, calling it a “racist” organization because they speak out against policies that distinguish amongst students on the basis of race. The letter goes on to say YCT-UT is a diverse group of Longhorns that is welcoming to all students regardless of race, ethnicity or any other immutable characteristics.

UT Student Body President Kevin Helgren said he is dealing with a divided campus right now. Helgren believes situations like what's going on now with YCT and students need to happen in order to address a larger issue: how to express things without it being offensive.

"I am a champion of affirmative action and I truly do believe that policy in this day and age is necessary to recruit a diverse and talented student body. I don't think that removing Young Conservatives of Texas is the best approach to take," Helgren said.

A recommendation will now go to the Student Affairs Committee, but President Fenves is set to make the final decision.