A driver who nearly hit a girl passing a stopped school bus has been arrested and the bus driver whose honking saved the girl's life has been commended. 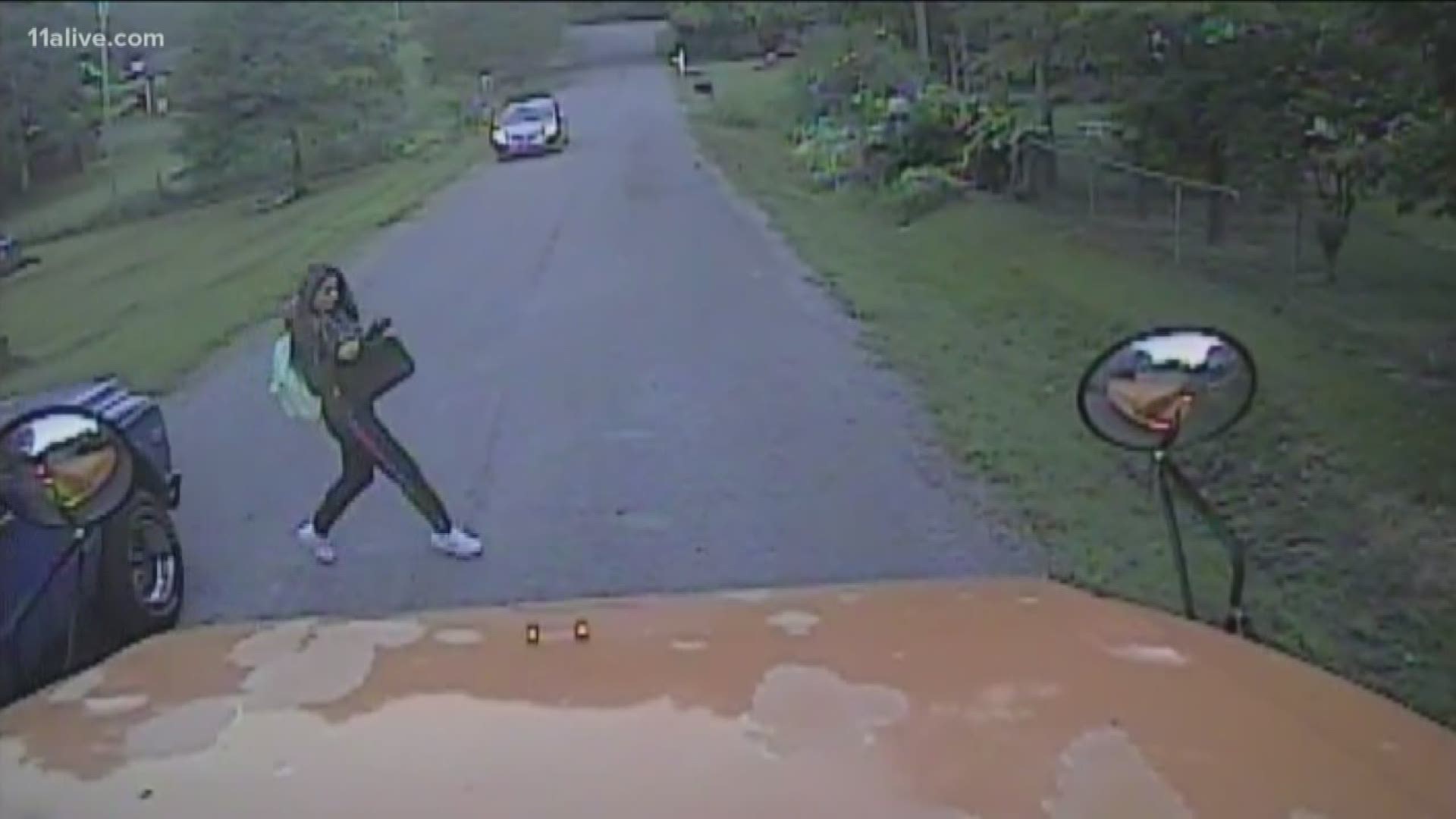 BARTOW COUNTY, Ga. — A 15-year-old girl enters the frame, head down, about to make her way across the street and onto her school bus.

Hardly a second passes before the bus driver starts blowing on the horn, to the girl’s surprise. She glances up, sees a car heading for her, and quickly scuttles out of the way.

A blue pickup truck swerves by, missing her by maybe three feet.

Bartow County officials released the video on Thursday, dash cam footage showing the incident that occurred last week in Cartersville, as they announced the arrest of that truck driver and a public commendation for the bus driver.

The girl’s mother, Sharon Vaughan, told 11Alive’s Joe Henke she just wanted to tell the driver, Shannon Banks, “thank you for being there and honking the horn and watching out for her.”

RELATED: ‘No, wait, stop!’ | Mom’s video shows her child nearly getting hit by driver who didn’t stop for school bus

Banks, the sheriff said, “saved that girl’s life in my opinion.”

“It would have been a serious, serious injury,” he said.

The truck driver, 42-year-old Blake Lockwood, was arrested Thursday morning, the Bartow County Sheriff’s Office said in a release. He’s been charged with reckless driving and failure to stop for a school bus, among other things.

In the video, Lockwood’s truck can be seen whirring by the 15-year-old student as another car going the opposite direction remains stopped.

The contrast between the care of that driver to stay at a safe distance, and the truck recklessly going around the bus, is stark.

“I had just motioned her across, then I checked my back mirror again, and as soon as I saw that car, I honked the horn,” she said.

“I was in total shock,” she added at the press conference.

Sharon Vaughan said when he daughter got home from school that day, she broke down and cried as she told her about the near-miss.

Now, she drives her daughter to school herself in the mornings.

There have been nearly 30 school bus stop violations this month in Bartow County, data released by the sheriff’s office on Thursday showed. And that didn’t even account for the full month.

Lt. Matthew Beal said he has issued nearly 4,000 violations since he started writing school bus tickets in October 2012, which works out to more than about 10 every week.

“I think about if I hadn't got it in time, if I saw her hit, it would have been a traumatic experience for all of us, even the students on my bus that were there,” Banks said. “If you see the school bus you need to stop at the stop sign, no matter what.”

“It scares me. I have kids of my own, and nobody should have to worry about their kids crossing the street to the school bus,” she added. “But we do.”

‘No, wait, stop!’ | Mom’s video shows her child nearly getting hit by driver who didn’t stop for school bus

When can you pass a stopped school bus?