The use of cursive is integral to the learning process for dyslexic students, which is why many are glad to see its reintroduction to Texas public schools. 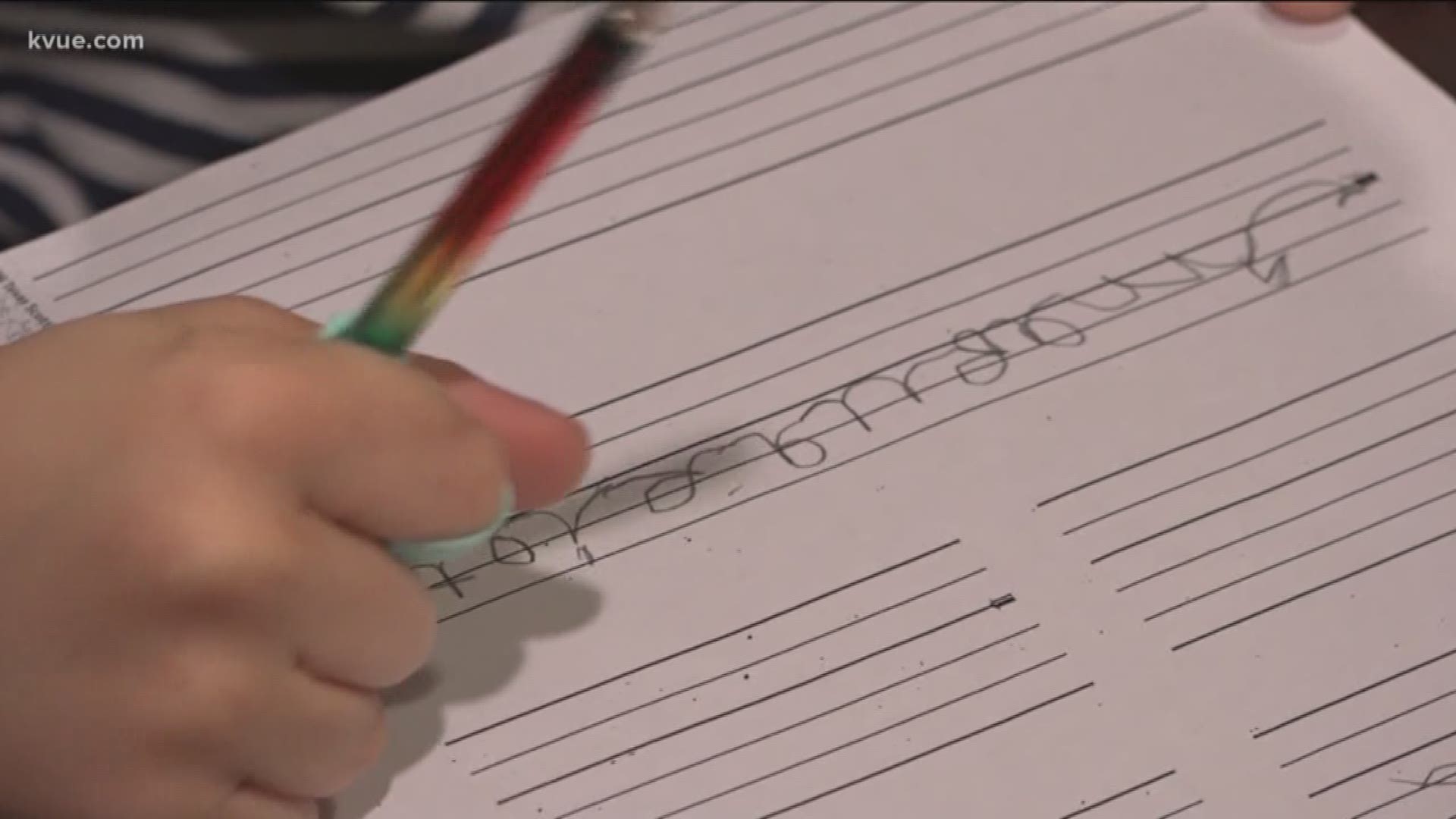 AUSTIN, Texas — When you write print compared to when you write cursive, it's making your brain work in related but different ways. While print letters are all disconnected, cursive allows writing to flow as one thought.

And using cursive will soon give many Austin students a better chance to keep up with their peers.

Cursive writing will be back in Texas' standardized testing this fall, as it will be a part of the Texas Educational Knowledge and Skills (TEKS) testing. Elementary students will be reintroduced to this type of writing during the 2019-2020 school year.

Wyatt Raye is currently in third grade and learning how to write cursive. However, simply learning wasn't always easy for Wyatt because he has dyslexia.

"It's hard to read, and you feel kind of upset," Wyatt said. "You can't read when everybody else can."

RELATED: Texas students will have to learn cursive again starting this fall

That's a big reason why his parents decided to pull him out of the public school system. His dad, Dustin Raye, said he was having trouble relaying information to other people.

"We didn't realize early on, but there's an emotional component to it, too," Dustin said. "When you're seeing all the people in his class progress and he's being left behind, it was difficult for him and difficult for us."

Along with teaching Wyatt at home, his parents are taking him to the Academic Therapy Center in Austin. The center has therapists and teachers to help students from pre-K through adulthood who have dyslexia.

Regina Staffa is a licensed dyslexia therapist who runs the center.

"We show how to read using multi-sensory techniques," Staffa said. "They actually need a lot more practice than a typical learner. We have to be able to get the practice in in a lot of different ways to where they can get it automatic and accurate."

Staffa decided to take this career route when she found out all three of her kids have dyslexia.

"I kind-of found it to be my passion," Staffa said. "I was an avid reader, and it made me really sad to think they wouldn't love books like I do."

Now 10 years into her private practice, Staffa has worked with about 500 families and mentored about 20 therapists into practice.

"When you go to have them write something, they're not always able to convey with language," Staffa said. "It's not only about reading, but it's the written output that also frustrates a lot of kids."

Staffa said learning in cursive reduces the workload on the brain for someone with dyslexia.

"It allows you to really think about your writing and not how you're writing it," Staffa said. "When you have dyslexia, it's hard for you to remember which way to make a letter in print. There's only one way to make it in cursive. It's faster, and they're less tired."

Now that cursive will be back in Texas public schools, Staffa said she hopes more people will embrace learning and using cursive.

"It really helps everybody write what you want to say better, faster and quicker," Staff said. "I hope that the education community will embrace this and will try it."

Dustin said he is glad to finally see his son grasp what he's learning.

Staffa also added that most of the people with dyslexia that she works with have a more creative personality, and cursive allows them to put their own curves and spins on their writing.

"You see a lot of their personality in their cursive," Staffa said. "They'll add a little spin to their own letters."

Man who raped dog so badly it had to be put down only gets 60 days in jail. He's already free.