Austin ISD school closure discussions expected to continue in January; what it means for 8 other schools

Austin ISD is expected to discuss 8 other school closures in January 2020. 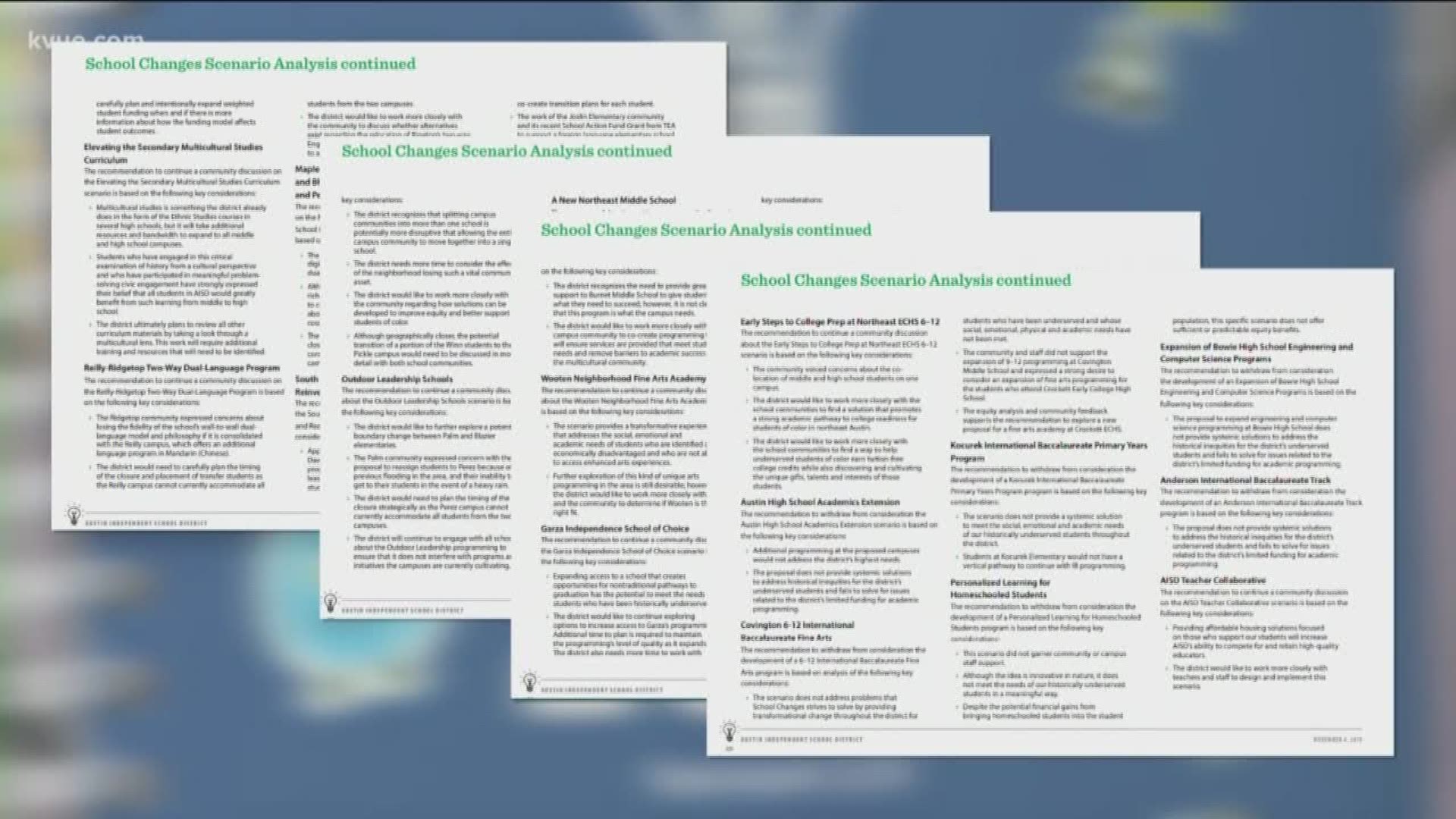 AUSTIN, Texas — 8 Austin ISD schools will be under consideration for closure again in January 2020.

AISD released its first version of the school closure plan in September 2019, which included 12 schools that were supposed to close, but the district received push back from the community.

So, what can those other eight school communities expect in 2020?

The 8 schools that will be expected to be discussed in January are:

In the School Changes 2.0 plan, AISD has a school changes scenario analysis. It explains why scenarios were not proposed for the November 2019 vote.

RELATED: Report showing AISD school closure plan was flawed, racist was given to board after vote

According to the School Changes 2.0 plan, approximately 25% of the students at Dawson Elementary are served by special education programs. AISD wants to create a seamless transition with the least amount of disruption for their most vulnerable students and families. They state district staff would need to co-create transition plans for each student.

Joslin Elementary is next on the list. If Joslin closes, students will go to Galindo or St. Elmo Elementary. The plan shows Joslin Elementary recently got the School Action Fund Grant from TEA to support a foreign language elementary school. AISD believes this may attract new students so they want to further evaluate this scenario.

Maplewood Elementary School is third on the list. AISD would close and combine the students with Campbell Elementary School. It shows they understand how critical Campbell’s digital media program and Maplewood’s two-way dual language program are to their communities.

AISD states, once Maplewood and Campbell merge, Maplewood's arts program will be offered at the new school. Blackshear is also an option for Maplewood students to attend.

Palm Elementary is another school AISD plans to discuss in January 2020 and fourth on the list. The school district wants to reassign those students to Perez Elementary or Langford Elementary. The plan shows the Palm community is concerned about this because of previous flooding in the area. The community said they're also concerned this will cause problems will trying to get their students to school if there is heavy rain.

RELATED: Dozens walk out of Austin's Pease Elementary ahead of school closure vote

Pecan Springs Elementary is fifth school on the list. If closed, students will go to Norman-Sims or Winn Elementary.

Ridgetop Elementary will also be considered for closure in 2020 and it is sixth on the list. The AISD plan calls to close Ridgetop and send students to a modernized, Reilly Elementary. The Ridgetop community is worried this will diminish the successful dual-language program.

AISD's plan shows they want to "relocate the program" and "plan timing of closures" because they said Reilly's campus can't accommodate all students.

Webb Middle School is number seven on the list and if it closes, AISD plans to send their students to Dobie Middle School.

Last on the list is Sadler Means Young Women’s Leadership Academy. AISD wants to re-purpose the campus. Students, who want to stay in an all girls school, will be allowed to go to Ann Richards School for Young Women Leaders.

AISD has said closing schools will move money from aging and under-enrolled campuses to improve programs since the district's seen a large drop in enrollment in the past few years.

There's no specific timeline of when AISD will begin discussing these schools in 2020.

Austin ISD
We hope you, our AISD family, have a wonderful holiday and look forward to serving with you in the New Year. All Austin ISD office and campuses are closed Dec. 23-Jan. 2. Staff return Friday, Jan. 3. The first day of classes is Tuesday, January 7, 2020 for the following schools: High Schools: Austin, Eastside Memorial, International Middle Schools: Martin, O.

3 people killed, including gunman, after shooting at White Settlement church