Scott and Leslie Bradshaw urge people to get their flu shot after his weeks-long hospitalization. 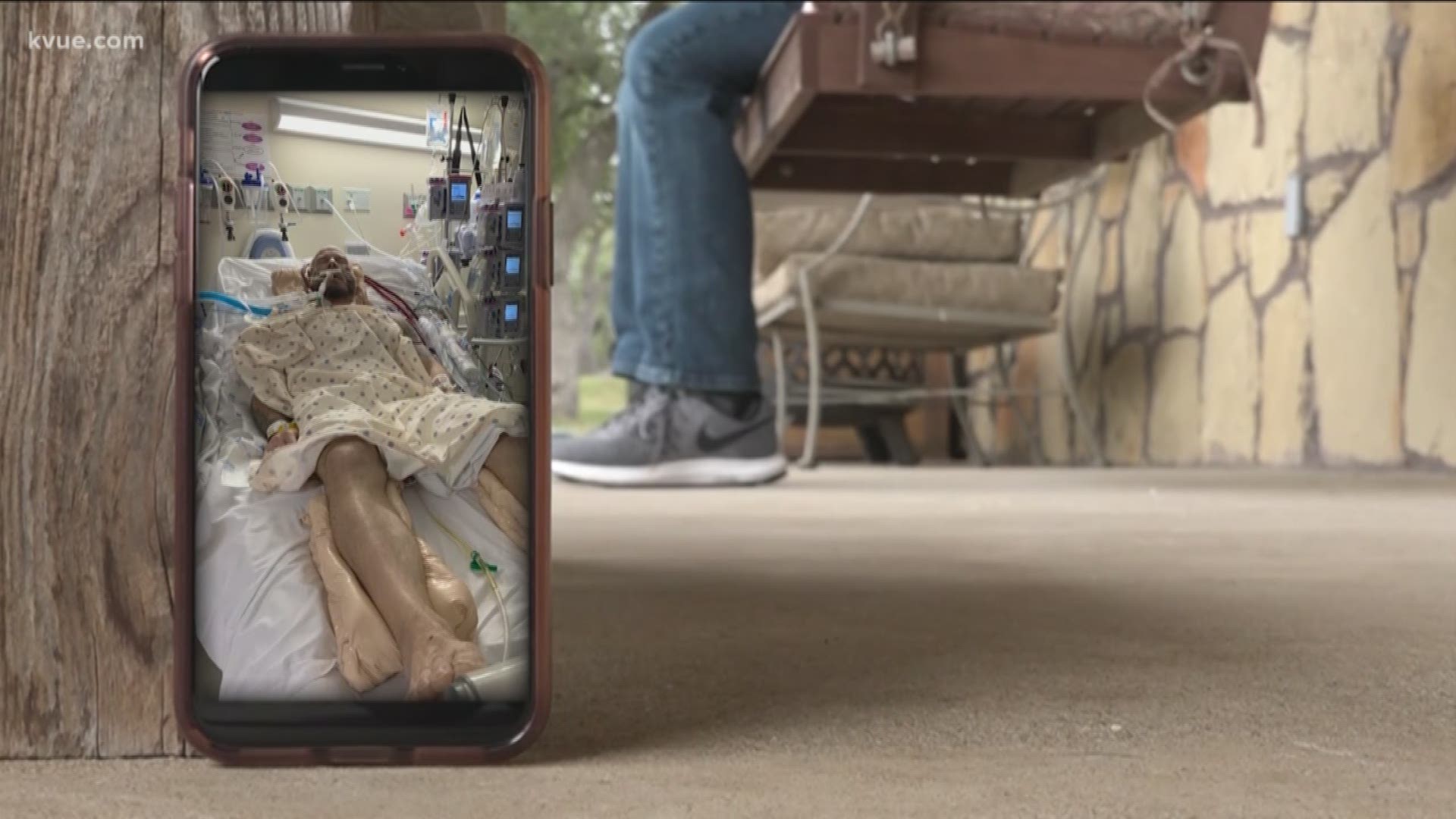 AUSTIN, Texas — Flu season is really starting to pick up and Dripping Springs resident Scott Bradshaw is recommending everyone get a flu shot.

He didn't get his and ended up in the hospital for two weeks. He also said he nearly didn't survive it.

"I've never had the flu before, never gotten the flu shot, I never thought something like this could happen to me," said Bradshaw. “The flu can just hit anybody, doesn’t matter if you’re healthy, middle-aged, old. It really changed my perspective on how I look at the flu vaccine.”

RELATED: Flu cases dramatically increase in Travis County; season has potential to be worst on record

Bradshaw said it started as a cough in mid-November and he thought it was a bad cold. He went to the doctor and got prescribed some medicine.

“But I didn’t really think much of it. Just thought, you know, a cold or whatever is going around," said Bradshaw.

On the night on Friday, Nov. 15, Bradshaw was sleeping terribly and woke up his wife, Leslie Bradshaw. She realized he was struggling to breathe.

Dripping Springs man hospitalized with severe case of the flu

"You may think it can’t happen to you, or that you’re going to get the flu and fight it off and shake it off – that’s exactly the way we thought, but that was not the case," said Mrs. Bradshaw.

They rushed to the emergency room and the Bradshaws were shocked to find out his oxygen level was at 50%.

“I’m thinking, 'I’m going to walk in there, they’re going to give me a shot, some pills, something and I’m fine ... go back home," he said, “They rushed me in the back started putting me on oxygen and all this stuff. Got in touch with Seton Main and had to call a special ambulance out to carry me there that would allow the oxygen mask and all that to stay on.”

“They were putting him on an oxygen machine, a mask and, at that point, I realized how serious it was," said Leslie Bradshaw. “The doctor told us at the time that they did all of this, had we waited even one more hour to seek medical attention, that I most likely would have found him passed out when I woke up.”

His flu turned into a pneumonia and doctors put him in a medically induced coma for one day. He spent two more heavily sedated and, during that time, his family didn't know what was going to happen.

"When you're talking about your best friend and your soulmate and that you were within hours of them possibly passing away, that's really hard to take in," said Leslie Bradshaw.

Scott Bradshaw said he spent Thanksgiving in the hospital and was released the day after. He said he takes care of his body and couldn't believe this flu put him in the hospital.

“The doctor said they don’t usually see people like me on the ICU floor. I work out six days a week. Pretty excellent health. I watch everything that I eat. No junk food," he said. "I've always had this misconception that if you get the flu shot, there's a bigger chance it'll give you the flu and that's why I've never done it before."

Scott Bradshaw said it may take months to get his health back to 100%, but he hopes his story sparks others to get the flu shot.

“It’s just going to be on my mind, 'Hey, is this going to happen if I get a fever?' Probably the next time I get sick I’m going to be watching myself real, real close. I may be at the doctor every day," he said.

The Bradshaws said the staff at Seton Medical Center, Dr. Weingarten, the pulmonary team, and others helped save his life. The family has also set up a GoFundMe to assist with medical costs.

Austin-Travis Couny EMS said this flu season could potentially be the worst on record and they suggest to go to the doctor within 48 hours of experiencing symptoms.