Texas teachers want to get back in the classroom, but these are their concerns

There is a lot of uncertainly when it comes to the upcoming school year; an uncertainty that state educators are trying to navigate. 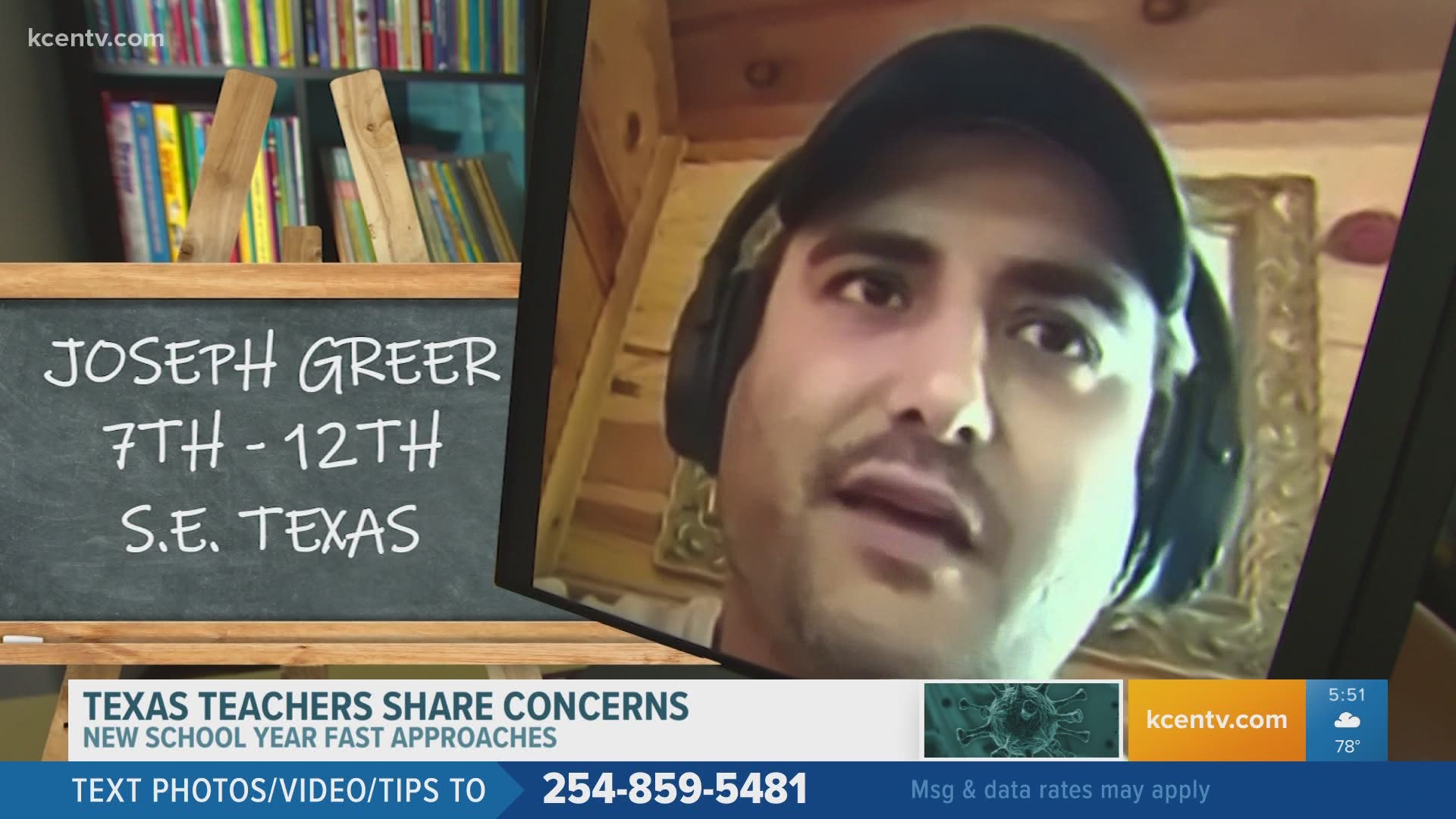 HOUSTON — With the seemingly daily change of plans, announcements, decrees, conference calls and legal opinions, bringing students back to the classroom in Texas has turned into a fight; a fight between the Federal government, state and local administrators in charge of the health departments and education systems.

Add to that teacher groups, airing their concerns about what they call either unrealistic safety suggestions or unimplementable plans, and parents who want their kids back in school. No one is really certain what tomorrow will look like, much less when and how the kids are supposed to be learning.

Texas teachers from across the state who spoke with KHOU11 say they are either feeling unheard or left out of the discussions and planning at the decision-making levels, telling KHOU11 the safety precautions or guidelines proposed as of right now, are not enough to keep anyone at school safe.

KHOU11 wanted to hear directly from as many teachers as would talk to us from all over the state. More than 20 reached out to us wanting to share their thoughts, some backed out of interviews, for the fear of losing their jobs. Ten chose to speak during a recorded Zoom interview about the upcoming school year and their concerns.

Some told us their districts were as prepared as they could be in the situation. Others were disappointed with what they called the lack of a plan.

One by one, they introduced themselves; a 26-year veteran teacher from North Texas, a long-time educator who went back to the very district she graduated from. Some are certified in all subjects teaching at Title I schools. Those with mostly kids with free and reduced lunches. They teach special education, history, middle school in East Texas, dyslexic kids in the Houston area, in public and private institutions. Some who joined the Zoom didn’t want to show their face or give us their full name or the district where they worked.

They didn’t represent their school districts, they represented themselves.

Editors’ note: school safety during the pandemic is a complicated issue and this article represents just a portion of the issues educators, teachers and parents maybe facing in the 2020-2021 school year.

All teachers who talked to KHOU11 said they loved their craft, missed their kids and wanted to be back in class.

“We definitely do need to get back into the classroom because part of teaching is hugging our kids, supporting our families,” said Rebecca Flowers, a middle school English teacher in East Texas. This will be her 24th year teaching. “But before we can do that, we need to make sure that we put certain safety precautions into place.”

“I’m perfectly comfortable going to back to the classroom full throttle,” Flowers said, “if it’s my time, it’s my time. But one of the things I really am concerned about is our children.”

“I don’t want a decision about us going back in the classroom to be made without teachers,” said Rhonda Jennings, a middle school special education teacher. “I can tell you, if we’re not a part of the decision to go back to class and the doctors and the scientists don’t say it’s safe, I’m not going. I don’t care who says so.”

Teachers addressed different parts of various proposals that have laid out what schools should consider doing to keep the children safe inside the schools, whether that’s masks, social distancing, air circulation, just to name a few.

Jennifer, a 20-year educator, is working as a librarian in Central Texas.

“I'm on a campus that has we fluctuate between about 270 to 300 kids every year,” she said. “And I see everybody. So just my chances of exposure are just astronomical. I have not seen any plans from my district on how are they going to handle the special areas? How are they going to handle music, PE art library, you know, things like that. I just can't see myself going back right now.”

“And being a teacher who had it, same concerns,” said Neala Fogarty, a teacher in southeast Texas. “My husband is eight weeks post diagnosis, I’m seven and we are now seeing long-term effects.”

She said she and her husband lost more than 30 days at the end of last school year to COVID-19, both hospitalized.

“We thought we knew how to protect ourselves. We did everything right, we still got it,” she said.

Fogarty said she wants to go back, but she’s concerned for her and her husband’s health, as well as the safety of her students. Fogarty said she didn’t know how her middle schoolers were going to be socially distanced, because she had a 38-student class last year.

“You could barely turn around and move in my classroom,” she said.

Debbie, an English teacher from a big school district in North Texas, who asked us to use her first name only, said she had the same concerns for her high school students.

“They [politicians] are unrealistic as far as spacing. I work in a school with 3,000 kids, high school students, and there's only so much that can be done,” she said. “If you think about spacing, distancing, eating lunch in the hallway. There's just no way that when the rubber meets the road, this is going to be acceptable on a large scale.”

Debbie, Fogarty and others said the proposed COVID-19 safety measures either on the school district level or the state level weren’t enough.

“These people need to get the virus under control before they start sending people back into big groups scenarios in old buildings with garbage HVAC systems and no windows that open,” said Jeremy Bennett, who has been teaching at the same school for 18 years.

“What about those kids who have sensitivity issues and cannot wear that face mask?” Fogarty brought up.

“My kids are autistic,” Jennings said. “I can tell you right now they're not going to do it.”

Dustin Rynders, supervising attorney for Disability Rights Texas, said parents of special education students can discuss mask-wearing and any other possible educational challenges in a special meeting they can request with school leadership.

Joseph Greer, a teacher at a small private school in Houston, said he believed his school was as prepared as it could be.

It's a threat, these teachers say, that presents them with an impossible choice.

“Both my kids were at risk, but at the same time, with my bills and with their medical bills and stuff like that, I can't afford to lose my job,” said Rose, a pre-K teacher in North Texas.

For Gaby Diaz, a Houston-area teacher, it’s a choice between feeding her unemployed parents or quitting.

“I don't want to be dying alone in a hospital without my family,” said an emotional Jennings. “I don't owe that to anybody. And I'm not doing it.”

“You're not supposed to, as a teacher, say ‘I'm pissed off at the state for doing this to me.’ But at this point, what else do we have to say?” said Chelsea Hughes-Martinez, a US history teacher. “It's my job and my duty to tell my state they're not doing right by our kids.”

Teachers said, if invited to find solutions for safe schooling during COVID-19, they’d be able to help.

“Put teachers in charge,” Flowers said, “trust me, we would be able to figure it out and we would have it together, without living or dying.”

KHOU11 has reached out to the Texas Education Agency for this story. We asked for their plans to safely provide education for special needs children, as well as if they’ve included any classroom teachers in their discussions about school reopening.

They told us they’re working on answers. The story will be updated when the answers are provided.