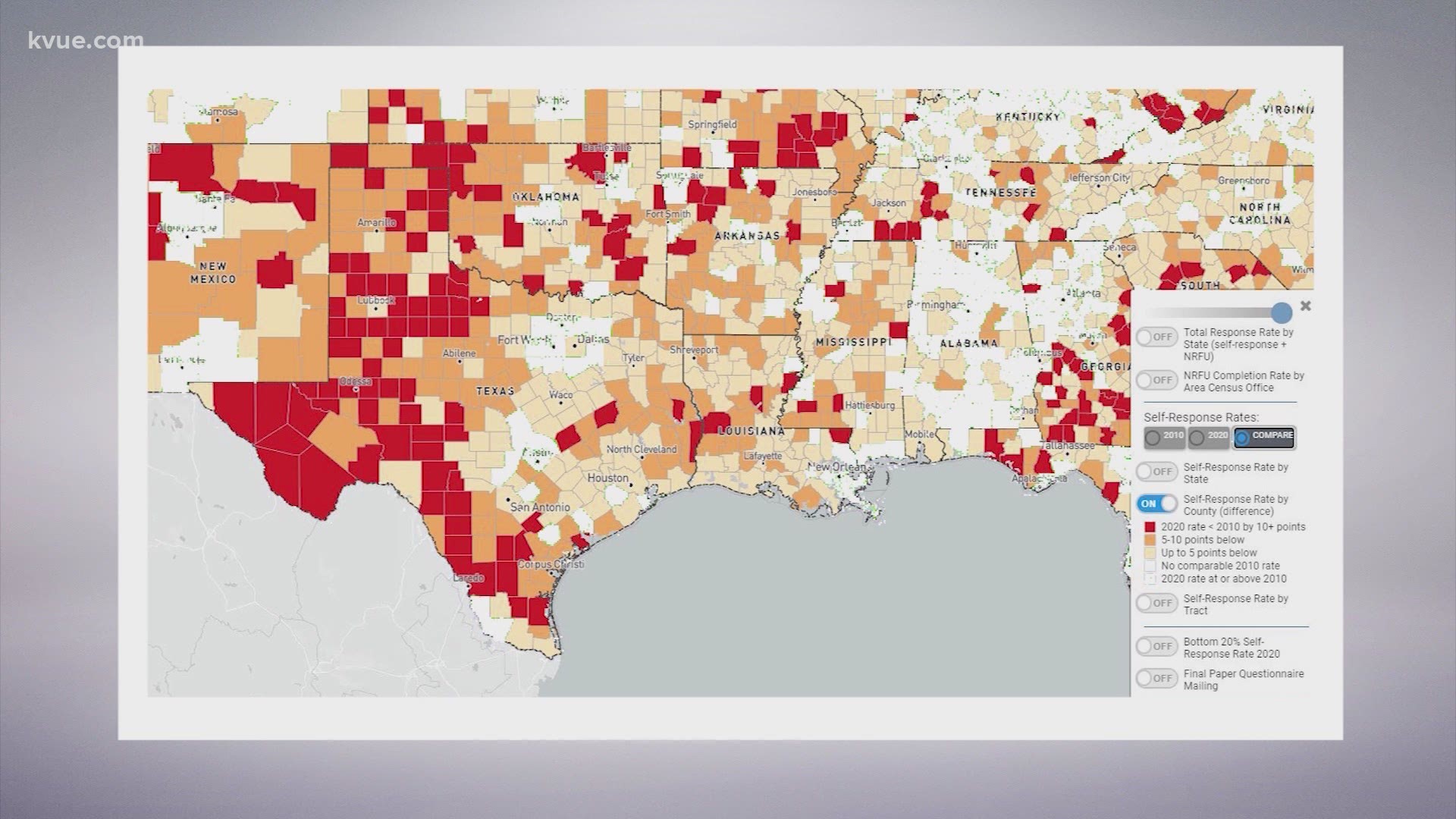 AUSTIN, Texas — According to researchers from The City University of New York, more than a third of Texans did not self-report to the Census Bureau as of Sept. 30.

It may lead to money left on the table, said Cameron County Judge Eddie Treviño Jr. That's money places like Cameron County needed during this pandemic.

“If we'd had the numbers, we would have been able to branch, do a lot more testing,” Treviño said.

Treviño said money his neighboring Hidalgo County got would have saved jobs and possibly lives if his county had received the same help.

“[The federal government] also gave it to the cities to help either aid in rent assistance or home mortgage assistance,” Treviño said.

Cameron County got $55 per person from the relief fund. Treviño said Hidalgo County got about three times as much. It all came down to census numbers.

His county census shows an estimated 423,000 people. The threshold for direct money from the federal government is 500,000 people.

Treviño said nearly half his county wasn’t counted in the last census and, according to CUNY researchers, 50 to 56% self-reported this year.

The Census Bureau said it will count 99% of the population, but this Government Accountability Report shows problems with the count. It cites not enough workers and operational changes.

The Census Bureau itself issued four reports in September warning about incomplete and inaccurate data potential.

The bureau announced an extra incentive for its temporary workers to complete cases.

However, the incentive does not track accuracy.

"Enumerating nonresponsive households months later than originally scheduled – and scheduling completion of that work by Sept. 30, 2020 – prompted the Bureau to incentivize increased enumeration production by granting monetary awards to certain temporary employees. The program calculates awards based on the number of completed cases per hour and hours worked per week, regardless of whether the work was completed accurately. Awards on this basis may reward employees producing errors in completed cases – whether intentional or accidental – and lead to an increased number of reinterviews than would otherwise be required to ensure data quality," Mark H. Zabarsky, principal assistant inspector general for audit and evaluation said in a Sept. 28 memo to the Bureau.

“The 500,000-person line is a real big arbiter with regard to a lot of government programs, housing, CBG and housing. If you're a county under half a million, you're not eligible for as many programs, which to me kind of defeats the purpose of your poor rural area,” Treviño said.

Cameron County isn’t the only place in Texas where CUNY researchers suggest an undercount.

When looking at the four biggest cities, data shows most people who self-report live in a higher-income area. Also, overall, fewer people self-reported this year versus 2010.

In Dallas, less than half of the residents in the center of town have filled out the census themselves. The demographics from the Dallas Economic Development Office show more than a quarter of the same population has a household income less than $15,000 a year.

In Houston, high poverty rates are in the same areas of low census self-reports.

In Austin, the I-35 corridor divides income levels and the people who self-reported.

Census workers knocked on doors to help get a true count. The only way to ensure you’re counted and your community gets federal help, such as emergency response money is to self-report.

The deadline is Oct. 5. Respond to the Census online here.

“English and Spanish Language Hours of Operation: Customer Service Representatives are available every day from 7 a.m. to 2 a.m. Eastern Time on the following phone lines:

“Non-English and Non-Spanish Language Hours of Operation: Customer Service Representatives are available Monday through Friday from 8 a.m. to 10 p.m. Eastern Time on the following phone lines:

“To help you respond, the Census Bureau also offers web pages and guides in 59 non-English languages, including American Sign Language, as well as guides in Braille and large print.

Woman missing for 2 years found alive at sea off Colombia