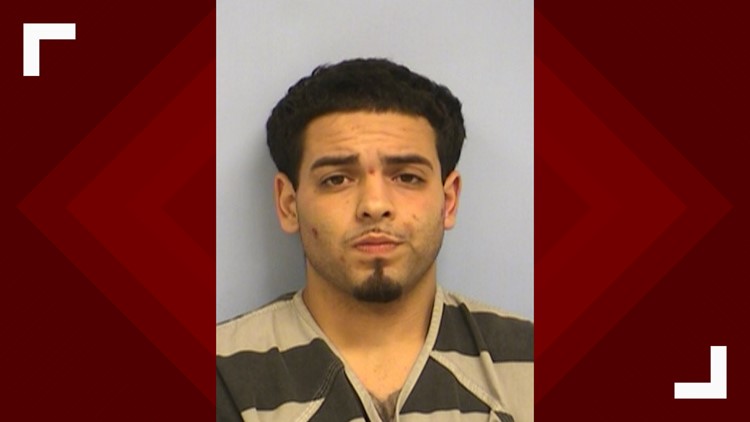 Saul Jaimes was near LBJ High School in East Austin to buy marijuana when he accidentally shot himself in the hand with a loaded gun he had in his backpack.
Author: Britny Eubank
Published: 4:24 PM CDT May 25, 2019
Updated: 11:03 AM CDT May 28, 2019

AUSTIN, Texas — A man has been arrested for drug possession, outstanding warrants and unlawful possession of firearms after a police officer responded to a call that he had been shot – when police said actually he had accidentally shot himself.

Court documents state that at approximately 8:06 p.m. on Monday, May 20, an Austin police officer responded to the area of Barbara Jordan Boulevard and Lancaster Drive after receiving a report that a person was saying they had been shot in the hand.

When the officer arrived, they found 23-year-old Saul Jaimes with his hand wrapped in gauze or bandages. He appeared to be sweating profusely and was pacing back and forth because he was in pain.

Jaimes told the officer he was "shot in the hand" near LBJ High School in East Austin. He said he was "seeing a friend" there and was walking behind the school when he was randomly shot by a passing vehicle.

2 men transported to trauma center after shooting in South Austin

Jaimes said he was walking toward a bus stop when he looked down in his backpack, heard one shot and realized he had been hit in the hand by a stray bullet. He said he never saw who shot him, but did see a newer model Chevrolet Impala or Malibu drive past closely. At that point, he told the officer he saw a "flash" and heard a very loud gunshot. He said when he realized he was shot, he began running toward the bus stop, then called his girlfriend to come pick him up.

She picked him up and they left to go to the nearest hospital. On the way, they saw an EMS unit traveling near Rogge Lane and Manor Road, which they flagged down. Eventually, the unit stopped at Barbara Jordan Boulevard and Lancaster Drive, where the officer met them.

While at the scene, the officer interviewed the girlfriend, who opened the car's center console to retrieve her ID. Inside the console was a gun holster. The officer asked if there were any weapons in the car and she said, "maybe." The officer, taking into account that Jaimes had been shot, asked Jaimes were the firearm(s) were. Jaimes said his firearms were "at his house," then corrected to "in a backpack in the trunk." His girlfriend opened the trunk, revealing a backpack and a strong odor of marijuana.

The officer opened the backpack and found two 9mm handguns, one loaded, one unloaded; eight handgun magazines; a plastic bag of marijuana; a pill bottle containing suspected ecstasy as well as assorted pills with various designs on them; a bottle of Promethazine Hydrochloride; and Codeine Phosphate syrup.

After handling the loaded gun, the officer noticed fresh blood on their gloves, indicating the gun had been handled after Jaimes had been shot. The officer asked police dispatch if there were any shots fired calls in the area Jaimes had allegedly been shot in earlier in the day, but they were unable to find any.

The officer asked Jaimes why he might have been "randomly" targeted in a drive-by shooting, but Jaimes couldn't answer. They asked if Jaimes had been buying or selling the marijuana near the high school and he initially seemed taken aback by the question, but then said he was in the area to buy an ounce of marijuana from a friend. The officer asked if the shooting had anything to do with the drug deal and Jaimes said no. Jaimes was insistent he had been randomly targeted in a drive-by.

EMS transported Jaimes to a hospital to treat his hand. EMS technicians told the police officer that the wound appeared to have black powder burns near the entrance, indicating it was a close shot, as if it may have been self-inflicted. The officer asked Jaimes to clarify his story, but he still insisted he had been shot in a drive-by. When the officer told Jaimes it was a crime to falsely report something to a police officer, Jaimes said something to the effect of, "Yeah, you got it right ... I accidentally shot myself." He said everything about going to the high school to buy marijuana was true, but when he reached into his backpack to look for his headphones, he lifted up the loaded gun and heard it go off. He then realized he had shot himself in the hand and called his girlfriend to pick him up.

Jaimes admitted to having possession of the backpack and everything in it. He said the marijuana was his, as was the pill bottle, which he said contained ecstasy he "found on his girlfriend's counter."

He was transported to the Travis County Jail.