DPS records show the suspected drunk boater has had at least five prior DWI convictions. 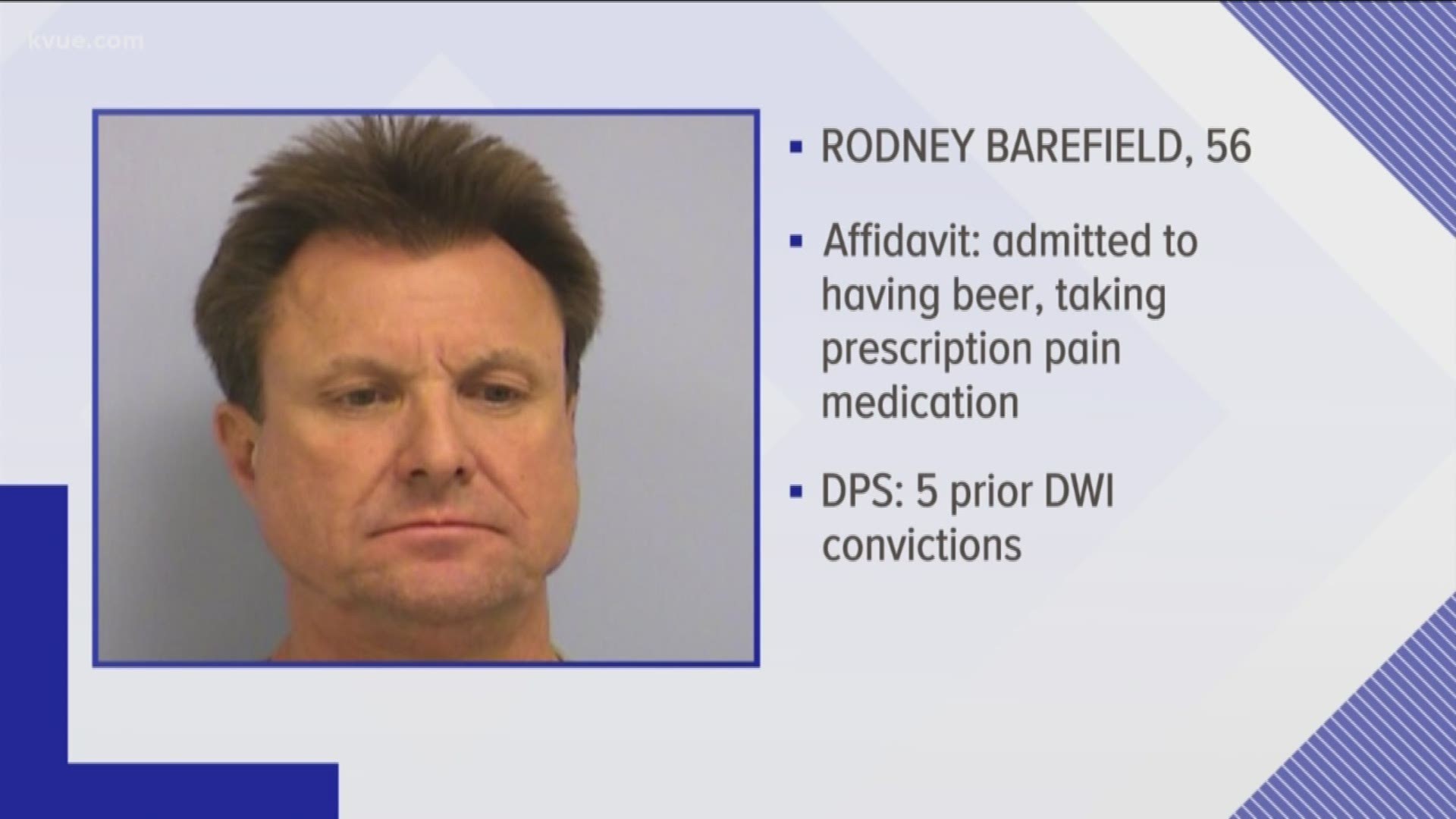 AUSTIN, Texas — A 56-year-old man accused of crashing his boat into a Texas Game Warden patrol boat on Lake Travis Thursday night has had prior DWI convictions.

Officers arrested Rodney Barefield and charged him with boating while intoxicated, a third-degree felony, after the crash, which sent two Game Wardens and their intern to the hospital.

The crash happened shortly before 10:30 p.m. near Mile Marker 16, not too far from the Lakeway Marina, a Texas Parks and Wildlife spokesperson said.

According to Barefield's arrest affidavit, he hit the patrol boat "at a high rate of speed."

Miraculously, everyone walked away with only minor cuts and bruises, Texas Game Warden law enforcement director Col. Grahame Jones told KVUE – all thanks to one of the officers' quick thinking.

"Our game warden that was operating the boat, our boat, was able to put the boat in reverse just a couple of seconds before the impact. He saw the other boat coming. That basically, in my opinion, kept serious injuries and possibly lives being saved by his actions," Col. Jones said.

The crew was wrapping up a shift on the water after patrolling the lake for drunk boaters as part of a nationwide initiative before Barefield struck them.

Barefield admitted to officers he had drunk a beer and had taken prescription pain medication prior to the crash, according to his arrest affidavit.

Texas Department of Public Safety records show Barefield has a history for driving while intoxicated:

"That's something that we're surprised to hear and very unfortunate that he hasn't had learned his lesson," Col. Jones said.

Boating law administrator Commander Cody Jones told KVUE what happened Thursday night highlights the important work the wardens do on the water, trying to prevent crashes like these from happening.

"Obviously, this gentleman has not learned his lesson. He's been out there, and this time, it was fortunate but unfortunate he ran into a game warden boat," he said.

The underside of Barefield's boat was damaged, "causing it to take on water," the affidavit said. It's possible the game warden boat may be totaled," Col. Jones said.

Barefield was in the Travis County Jail as of Friday afternoon. A judge set his bond at $30,000 and he must install breathalyzers in his vehicles as part of his bond condition.

1 / 3
Pattrik Perez, KVUE
On July 4, a man crashed into a Texas Game Warden boat. He was arrested and faces a boating while intoxicated charge.