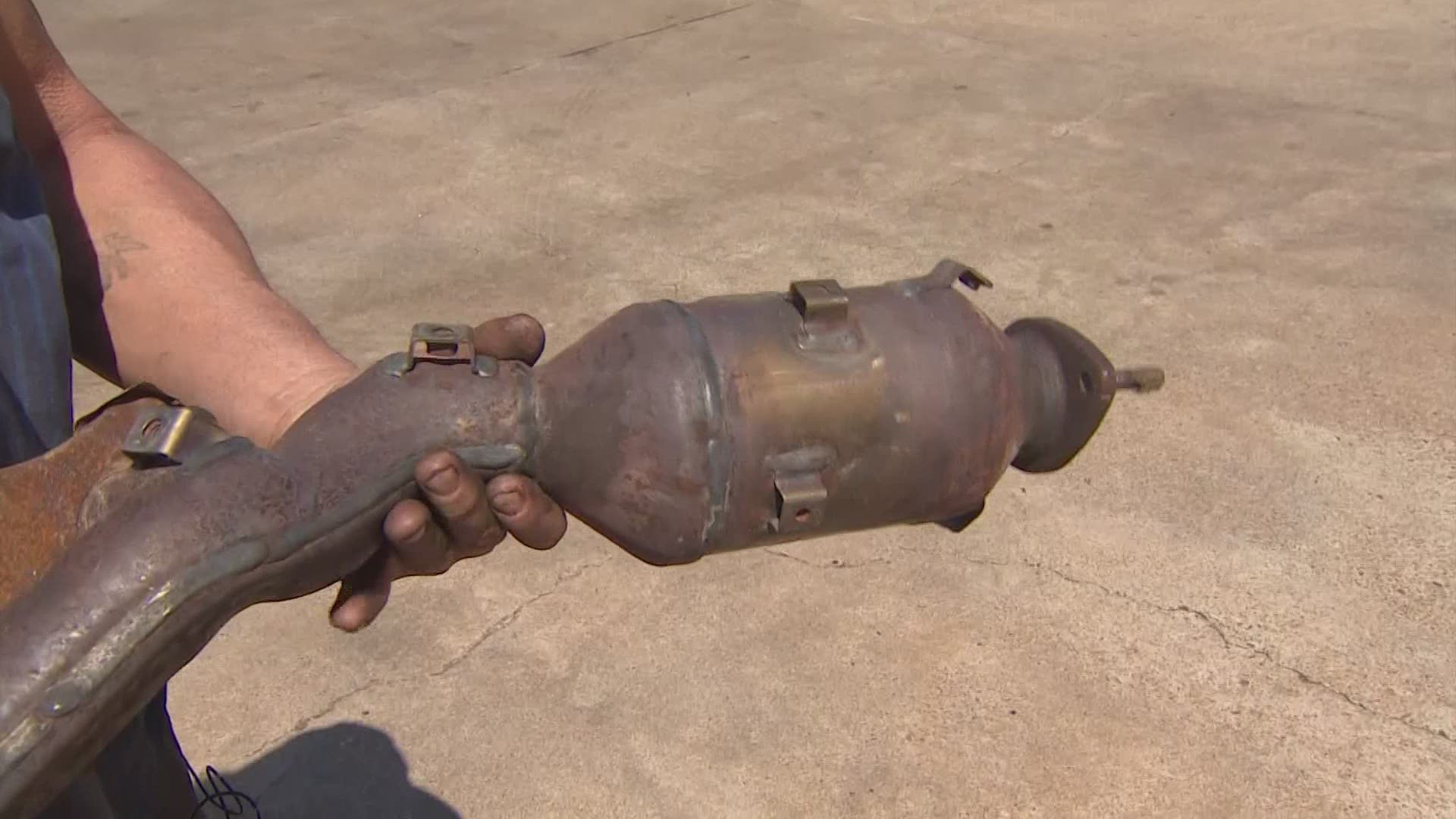 Deputies said they tried to stop the vehicle during a traffic stop, but the driver kept going.

At some point, all four people inside of the vehicle got out and ran away but were all quickly caught and taken into custody, according to deputies.

While searching the vehicle, deputies said they found 32 fresh stolen catalytic converters inside along with more than $14,500 in cash.

The car and cash were seized.

Catalytic converters thefts are a problem across the country.

A week ago, three people were arrested after they were allegedly caught stealing catalytic converters off of cars on Houston’s northeast side, leading to a chase, police said.

RELATED: Men caught in the act stealing catalytic converters in custody after chase in NE Houston

However, it is not because drivers are having issues with them.

“I can tell while I’m working on a car, I hear one drive up, and I say, ‘Someone stole a cat,'" Beglin said.

He said they’re easy to steal.

Misty Roberts had her catalytic converter stolen on March 12 from the parking lot of the school where she teaches.

“More than anything, I felt completely violated,” Roberts said. “When I realized something was wrong with my car, the very first thing I thought was it is spring break. This is not how I want to start it. What is going on?"

Beglin said thieves are after small amounts of metal inside the converters which can sell for hundreds of dollars.

“They got palladium in them. They’ve got platinum in them. What people do is they break them down at like a recycling center,” he said.

Beglin questions those who buy the converters.

“You’re pretty much ‘OK-ing’ it for everybody to go out and steal these things," he said.

Our sister station, KCEN, recently reported that the number of catalytic converter thefts being investigated across Central Texas is in the hundreds.

Catalytic converters are made with three valuable metals: platinum, palladium and rhodium. When people steal the parts, they often sell them for scrap.

"These thieves are probably gaining a couple hundred dollars when they steal these catalytic converters, but the folks they're stealing from it's costing them thousands of dollars," David DeRosier said, the general manager at Freddie Kish's.

It only takes thieves about 5 to 10 minutes to steal a catalytic converter if they have the right tools and enough space to get underneath the vehicle.

And if the owner does not have comprehensive coverage on their car, insurance will not cover repairs. Additionally, it may not be just that piece missing. Thieves could potentially do more damage.

The Temple Police Department said the best way to protect your vehicle is to park it in a well-lit area and be aware of your surroundings.

"Parking in a secure enclosure when you can, are all things that are gonna make it less likely that this crime will happen to you," police said.

D5 CRU attempted a traffic stop and the vehicle fled. 4 susp bailed but were quickly apprehended. While searching the vehicle 32 fresh stolen Catalytic Converters were discovered along with over $14,500 in cash. The cash/car were seized, 4 in custody! @HCSO_D5Patrol @HCSOTexas pic.twitter.com/tEOEXUKBJV