The call happened at the Days Inn in South Austin. 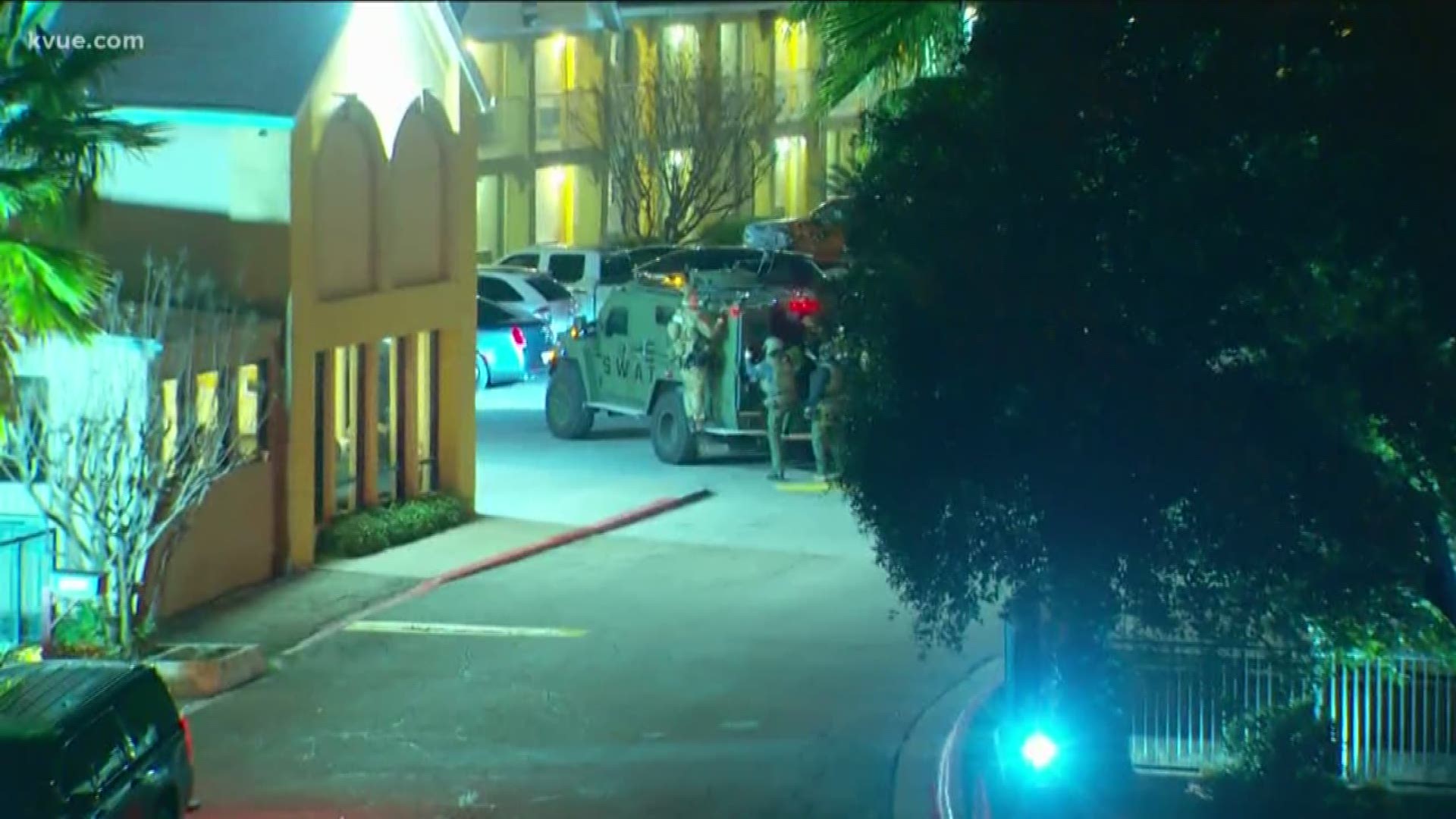 AUSTIN, Texas — A man was arrested after an early morning SWAT call in South Austin on Thursday.

According to Austin police, officers received a tip about possible human trafficking at the Days Inn located off of Ben White Boulevard.

According to an affidavit obtained by KVUE for 1st-degree felony continuous trafficking of a person, police responded to a 911 call at Days Inn on Wednesday. According to the affidavit, a woman had run into the hotel's office saying she was scared for her life. The victim told police she had been prostituting for a man named Cortez Johnson for approximately a year.

The victim said she met Johnson in Louisiana and prostituted for him there until they had to leave the state because Johnson had been arrested for human trafficking. According to the affidavit, Johnson's criminal history shows he was arrested in Jefferson County, Louisiana, for several charges in November 2018, including 2nd-degree battery and human trafficking. He was also arrested in Houston in December 2016 for compelling prostitution by force, threat or fraud.

According to the affidavit, the victim told police she had been living at the Days Inn since Oct. 8. She said Johnson made her and at least two others solicit prostitution in Downtown Austin. She said the agreement between herself and Johnson was that she would prostitute herself and give him all the money and he would "take care of her," but if she needed anything, she had to ask him for money. According to the affidavit, the victim said Johnson required her to make at least $1,000 per night and when she did not, he was physically violent. She said Johnson had attacked her that day for withholding money, but she was ultimately able to break away and run to the lobby. Johnson then fled the scene in a black sedan, according to the affidavit.

The sedan was located by officers a few blocks away, behind a bar, and the victim's phone was recovered inside the same bar a few hours later. The victim allowed police to search her phone and police found that all texts between Johnson and the victim had been deleted.

The victim was initially taken to the police station to make a statement but changed her mind about pressing charges against Johnson and requested to be taken back to the hotel, according to the affidavit. Officers took her back, but shortly after going inside the room, the victim came back out and told officers she was scared, wanted out, was willing to cooperate and that Johnson was back in the room. Detectives filed a search warrant and due to Johnson's refusal to come out voluntarily, it was at this time that the SWAT team responded and eventually took Johnson into custody.

During a police interview, Johnson said that he didn't know what the victim did for a living but said he was a "sugardaddy" who took care of her in exchange for sexual favors. He said he did assault her Wednesday because he believed that she had put a narcotic in his drink and stolen $300 from him, according to the affidavit. He claimed he didn't wait for police to arrive to report the theft because he had to go buy a 5-Hour Energy drink and go to the Cadillac dealership for car parts.

According to the affidavit, on Oct. 8, police had responded to the Quality Inn at 2751 East Highway 71 westbound service road for a check welfare call. In that case, hotel staff said a victim walked into the lobby, intoxicated and covered in blood, with several injuries. At that time, the victim refused to make a statement to police, but officers noted several things that made them believe she was potentially a human trafficking victim: 1) the person who paid for the victim's room was a man named "Lorenzo Johnson," 2) hotel staff said Johnson had been a customer for the past 28 days and would pay cash for the room every morning, 3) staff said Johnson gave a strict warning that no one should have a room key but him. That day, officers made contact with Johnson and another woman, who were uncooperative. A third woman ran away from the police.

On Thursday, when asked about the October incident, the victim in the Days Inn incident told police that she and two other women had been staying at the Quality Inn and prostituting for Johnson. According to the affidavit, she told police that the night before, Johnson had accused her of working for another "pimp" and assaulted her. She said she slept in a staff break room for the night because she feared further attacks from Johnson. She said she did not make an outcry to officers at that time because she has no family or friends in the area, had no money or ID and "felt that she could not survive on her own without these things." Over the next six weeks, according to the affidavit, the victim was arrested for prostitution three times in the Downtown Austin area.

According to jail records, Johnson was booked into the Travis County Jail on Thursday morning just before 5:30. His bond is set at $100,000.