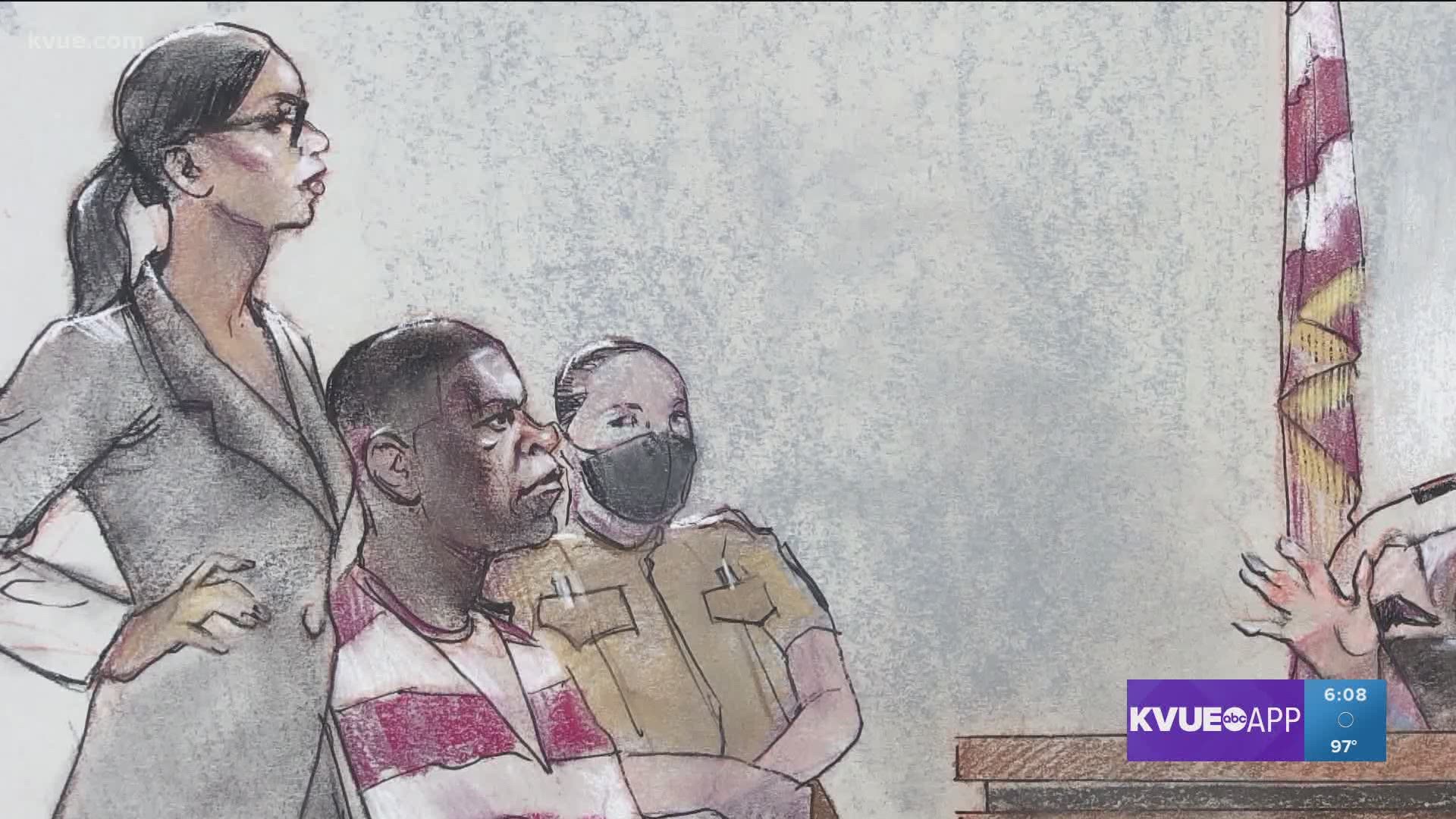 In 1998, Reed was convicted of the 1996 abduction, rape and murder of Stacey Stites. For more than 20 years, Reed has maintained his innocence and he is now trying to get a new trial to clear his name.

All last week, Reed's defense tried to prove he did not commit the crimes he is convicted of. Defense attorneys maintain Stites' fiancé, Jimmy Fennell, is responsible.

State witnesses testified otherwise on Friday, the first day the prosecution called witnesses. The two main witnesses were the two main investigators on the case: former Bastrop police investigator David Board and former Texas Ranger Rocky Wardlow. Read a recap of Board and Wardlow's testimony here.

Week two of the evidentiary hearing started on Monday with more state witnesses.

The State is now trying to convince Judge J.D. Langley the right man is sitting on death row for the 1996 abduction, rape and strangulation of Stacey Stites and there is no need to look at anyone else.

Sgt. Brian Seales was the first state witness of the day. He's an investigator with the Texas Attorney General's Office. He testified he was contacted by his supervisor on Saturday to do a search for Jimmy Fennell in Austin Chronicle articles. He testified he searched as far back as 2001 and used three phrases for the single search: Rodney Reed, Jimmy Fennell and Stacey Stites.

Sgt. Seales said he found one article in 2005 and found an image of Fennell in a September 2008 article where Fennell pleaded guilty to kidnapping and sexual misconduct.

Last week, the defense tried to prove Reed didn't abduct, rape or kill Stites in 1996, the crimes he was arrested for in 1997 and convicted for in 1998.

Defense attorneys maintain Fennell killed his fiancé, Stites, and not Reed. Those witnesses testified that Stites and Fennell had an abusive relationship, that she was scared of him and that Fennell used racial slurs on several occasions.

But Davis, a professor of psychology at the University of Nevada in Reno, said eyewitness testimony is mostly unreliable. She took the stand for several hours on Monday and said factors like passage of time play a big role in memory.

She also testified about the problem with eyewitness identification and how identifying a stranger is more difficult than someone you know. Dr. Davis said there are more errors when one race tries to identify another. The term is called cross-race bias. She said whites do it more than other races.

Davis also talked about seeing an image from the media and how that can blend into your mind, making a false memory. People become so convinced of these false memories that they become "honest liars" because these memories can be very vivid.

Rodney Reed's mother, Sandra Reed, said she has doubts about this memory expert. But she said she is hopeful and optimistic. For the first time, she sees something she has not in other proceedings.

"I see fairness in this judge and that just makes me feel better cause the other past judges have just rubber-stamped everything," Reed said.

The third and final witness of the day was Dr. Suzanna Dana, a forensic pathologist. Prior to opening up her own practice, Central Texas Autopsy, in Lockhart in 2006, she was a deputy medical examiner for Travis County. She said she has conducted more than 11,000 autopsies.

Dr. Dana said she has been asked to review the Reed case and has looked over the Stites autopsy photos, images and information to arrive at her conclusions. She told the court that determining the time of death is not an exact science. But she testified that Stites' died sometime between 3 a.m. to 4 a.m. It is around the same time period former Travis County Medical Examiner Dr. Roberto Bayardo testified in the original trial: 3 a.m. to 5 a.m.

Dr. Dana's testimony is expected to continue on Tuesday morning.

5:33 p.m. – Dr. Dana says it appears Stites was wearing some portion of a H-E-B uniform. In Carol Stites’ previous testimony, she last saw Stacey Stites wearing what she wore to bed: a T-shirt. Dana says Stites’ truck found at 5:23 a.m., so therefore Stites was dead by 5:20 a.m.

Court has adjourned for the day.

5:04 p.m. – Prosecutor is questioning Dr. Suzanna Dana. Dana looked at Reed’s case to come to a conclusion and looked at Stite’s autopsy. Dana says etermining time of death is not an exact science. She says she looked at cooling of body and rigor mortis. Dana says Stites' body lacked signs of decomposition.

Dr. Dana says that looking at crime scene video, Stites had been strangled. Dana says there had been a struggle and there is no color change on her abdomen. Dana disagrees with defense’s time of death of before 3 a.m. She said time of death is from 3 a.m. to 4 a.m., which is consistent with the State’s original estimate of 3 a.m. to 5 a.m.

4:27 p.m. – The State's next witness is Dr. Suzanna Dana, a forensic pathologist. She has performed more than 11,000 autopsies and issued a report about Reed's case a couple of months ago.

3:40 p.m. – Defense attorney Corrine Irish is still cross-examining memory expert Dr. Deborah Davis. Davis says just a single exposure to misinformation to media can distort memory. Irish and Davis are now talking about studies about memory. This back and forth drags on until the judge finally interrupts. Judge J.D. Langley instructs Davis to just answer questions and not embellish answers “to prevent chaos." This way, there “will be an end.”

2:16 p.m. – Dr. Deborah Davis is back on the stand. The State continued questioning Dr. Davis about memory, suggestions and false reports. The State took Dr. Davis through hypothetical situations. For example, after a witness supposedly has a conversation in 1996, that witness recounts the conversation in 2019 and comes forward with the conversation because there was some “stuff” that fell in line about a suspect.

12 p.m. – Prosecutor Travis Bragg continues questioning Davis. Davis discusses absentmindedness, expectation affect memory and memory distortion – the idea that we can remember something that never happened at all and that what we believe and what influences us also affect our memory.

Davis says you can see an image in the media and it can get blended in your mind and confused as a real memory. These false memories can be vivid and are so real for people that they're called "honest liars" because they have or someone else has convinced them that the memory is true.

Back from break. prosecutor, Travis Bragg, continued questioning, Dr. Davis. She talked about how absent mindedness & expectation affect memory. Memory distortion: can remember something that never happened at all. What we believe and what influences us also affect our memory.

Davis says the need to explain is a drive behind false memories in cases such as sexual abuse cases. The more vague the original memory is, the higher the chance that outside influences can affect the memory, Davis says. She says if someone agrees with you about an event, it can make you more confident in your opinion.

Davis says if someone spent time consuming media about a topic, that would affect and/or distort their memory. Bragg points to several binders of newspaper articles of Rodney Reed, Jimmy Fennell and Stacey Stites sitting beneath the judge's bench. The defense objects.

Court breaks for lunch. Testimony will resume at 1:30 p.m.

10:50 a.m. – The State starts with Dr. Deborah Davis. She says identifying a stranger is harder than someone you know and most eyewitness identification is difficult because witnesses don’t know them. She says it's easier if lighting is good and not far away. Davis says, for example, in a police line-up, if a suspect is not there, the wrong person is picked one out of five times. In experiments where a target is present, people picked the right target less than 50% of the time, Davis says.

Davis says that in suspect line-ups, there are a lot of errors because people just look alike. She says the problem becomes magnified when one race tries to identify another race, called cross-race bias. She says more errors are involved when cross-race bias is involved.

The hearing takes a 15-minute break after this testimony.

10:05 a.m. – The State's first witness of the day is Sgt. Brian Seales with the Texas Attorney General’s Office. Seales testifies that he was asked by the prosecution on Saturday to search for Jimmy Fennell’s name in Austin Chronicle articles. Seales says he found one in 2008 with a picture: Fennell pleading guilty to kidnapping and sexual misconduct.

The State's second witness of the day is Dr. Deborah Davis. The State establishes her as an expert in eyewitness memory. In cross-examination, Dr. Davis says there has not been as much research done for memory recall as other areas.

The defense objects to Davis' testimony, saying she isn’t qualified and not relevant to the case. The State says Davis will talk about the reliability of the 20 to 25-year-old testimony of defense witnesses.

The State says there has been additional research since the 2007 paper the defense brought up. Davis also says she has testified for the military. Davis says the principles of memory are a legitimate field and have been studied since the late 1800s.

Davis says a huge delay affects memory, and the defense objects again. The judge asks if Davis will be determining which witness is lying. The judge says that’s not appropriate.

The judge later allows Davis as a witness.